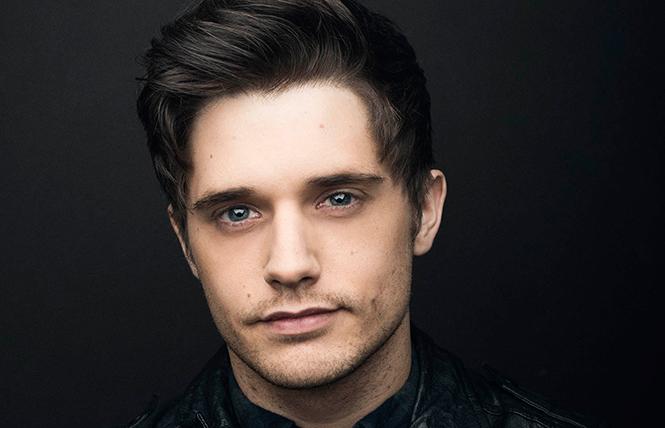 Andy Mientus takes to the elegant stage of Feinstein's At the Nikko on October 12 and 13, for an evening of song devoted to the great folk rocker Joni Mitchell. The singer/actor, well known for his television roles on Smash and The Flash, and onstage in Spring Awakening, will offer his own unique take on Ladies of the Canyon, the classic 1970 album on which Mitchell wrote and performed all the songs.

Like many of Mitchell's works, Ladies of the Canyon features songs that are deeply personal. It's almost as though she wrote poems based on her own life and then set them to music. For Mientus, performing the album is the latest project in a busy career that sees him appearing regularly on stage and on television. 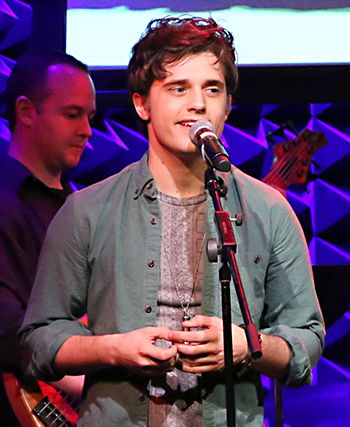 Andy Mientus at 54 Below in New York.

"I think I look and give off the energy of deceptive youth," Mientus said in a phone interview with the Bay Area Reporter. "I'm 32 years old and I've been in the business for over ten years. I've been really lucky to do a lot of different things in different media. I've had a really great career so far."

The national tour of Spring Awakening, which he played in San Francisco, was his debut role. He describes the show as being about a group of German schoolchildren going through puberty who discover themselves sexually in 1891, in a society that was not supportive of young people's voices.

Mientus played Hanschen, one of the gay characters, which, he says, was great for him to explore at the time because he was coming into his own sexuality.

Spring Awakening came his way quite by accident: he was a fan of the show who had started a Facebook group for himself and his friends to discuss the show. Others joined the group, and he was soon contacted by one of the producers of Spring Awakening and asked to make his group the show's official Facebook page. He agreed, and was eventually invited to audition for the show's touring company. He got the job. 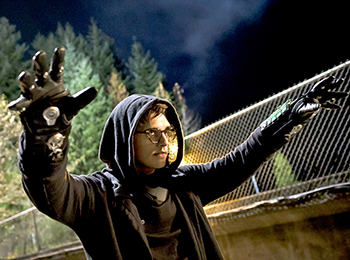 Andy Mientus at Pied Piper on the CWs The Flash. photo: Katie Yu

Mientus first came to the attention of television audiences when he was cast as Kyle on NBC's Smash, a musical drama set in the New York theater world. Though it premiered to huge ratings and rave reviews, Smash tanked during its second season, losing most of its audience.

"I think Smash came at a time when TV was changing and the way people watched TV was changing," Mientus said. "This was in the early 2010s and I think people were still DVRing back then. You weren't beholden to the network schedule, you could record it and watch it at your convenience, and it was harder to gauge those ratings. But it has endured and become a cult classic. Someone asks me about Smash every single day."

Kyle was a gay role, the first of several gay roles he's played on television. He was recently seen as Hartley Rathaway, aka The Pied Piper, on the CW adventure series The Flash. The Pied Piper was TV's first gay super-villian.

"He is out gay in the comics, and they chose to keep that for the show," Mientus explained. "They let him be funny in a specifically gay way, which I really appreciated. They didn't shy away from that. So I love that he got to be scary and strong and a force to be reckoned with, and still be this sassy gay guy." 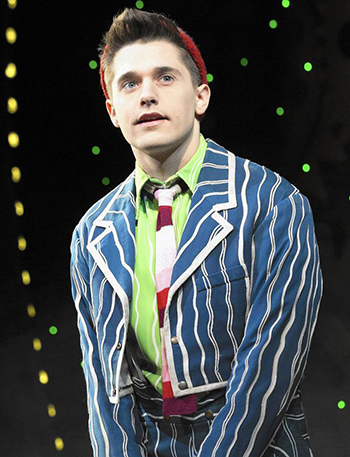 There were crossover episodes between The Flash and the CW's Supergirl, which co-stars Jeremy Jordan, who played Mientus' boyfriend on Smash. Yet Mientus, who is not currently appearing on The Flash, has not worked with Jordan on this series.

"I think it's always a great thing when a show has a queer character and they do their best to find a queer actor to play it," Mientus said of the TV roles he's had. "I'm not saying that only queer actors should play queer roles. But I do think that when the stars align and the role can be played by a queer actor, there's inherently some richness, some extra nuance because of our lived experience. It's a really nice thing, so I love playing queer characters."

Mientus personally identifies as bisexual. He was happy to talk about what Joni Mitchell means to him. He recalled that as a youth, Mitchell was one of the first voices that he heard in his house. There was always music playing: classic rock, folk, and country. His dad was heavily into Bruce Springsteen, Johnny Cash and John Prine, and his mom liked Mitchell, often singing Mitchell's song "The Circle Game."

She gave him a copy of Mitchell's album Court and Spark when he was old enough to appreciate it.

"Joni has always been this voice that I wanted to emulate," he said. "And when I got old enough to appreciate her lyrical ability and was starting to write various things myself, I was impressed with how she could boil down such complex concepts into single lines of poetry. She's really good at the economy required of lyric writing. I've always been a huge fan."

Mientus recalled a time after Smash when he was doing a lot of TV guest roles, waiting for the next big chapter in his life, while frequently playing Ladies of the Canyon. 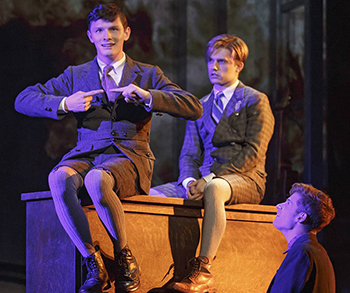 "The album started to make sense to me as a theater piece," said Mientus. "It was a monologue, with a beginning, a middle and an end. It was something I thought would be satisfying, so I started speaking to my musical director Benjamin Rauhala about that.

And we were like, 'Oh, that could be cool. I don't know if it would work or not, because it's one of the more subtle Joni albums.' It was before she started adding a lot of instrumentations, it had only piano and guitar, a light smattering of percussion and her voice, and that's it. It's very quiet and slow."

And then some slots opened up at a venue in New York. The creative director of the venue reached out to Mientus and asked him if he had anything. So he put the show together and got a great response.

The show includes banter about Mientus' connection to each song, as well as fun facts about Mitchell, a woman he calls "fascinating." The show features piano, guitar, a triangle, two background vocalists and a guest vocalist.

"Joni has said that she loves it when men sing her songs, because she considers them very feminine," Mientus said. "So automatically by having a male voice singing the song, it opens up new layers to the song that she didn't know were there. I really try to tell you the story of the song."