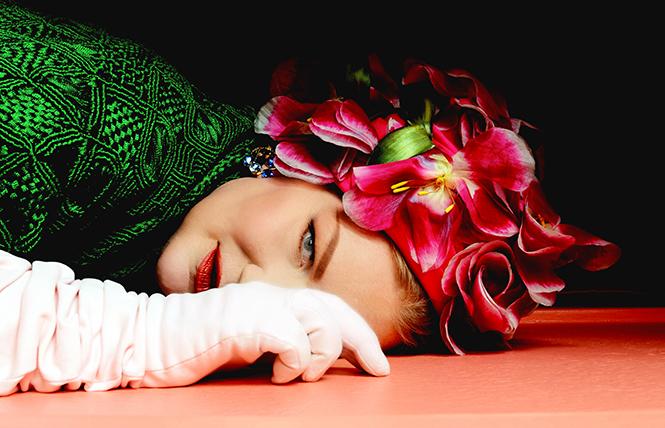 It's been several years since singer Veronica Klaus, for many years a fixture on the San Francisco cabaret scene, departed these shores for new adventures in upstate New York. But on August 31 and September 1, Klaus returns to the city where it all began. She'll be performing four shows at Martuni's, accompanied by the Tammy Hall Trio.

Klaus is an old-school performer whose feet are firmly planted in the 1940s and '50s. Her shows conjure up images of smoky nightclubs of generations past. Her unique song stylings have garnered her a loyal fan base in San Francisco, and though she's happy with her new life in New York, she promised her fans and friends in the Bay Area that she would always return home.

"Things are good," Klaus tells the Bay Area Reporter of her new life. "I have a show coming up when I get back home to New York, and a show coming up for Harvest Festival. It's an annual event here in Sharon Springs, which usually brings about 8,000-12,000 people into town. Usually the village is 540 people, so it's a big deal."

Klaus explained why she made the move after having been in San Francisco for thirty-plus years. 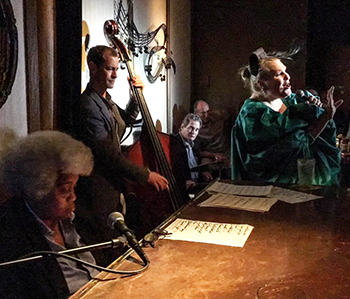 "I had my studio apartment in San Francisco, which was charming and lovely, but it was tiny," she said. "It started to close in on me, and I started to feel claustrophobic. There was no way I could have afforded anything bigger."

Klaus added that she also felt frustrated, as a lot of the venues where she had been singing had closed.

"I didn't know what else to do in San Francisco," she said. "Where to go, or what was ahead of me there. I mean, I love the city, but it's very hard to get through to the new demographic when you're doing what I do."

Klaus, who grew up in Illinois, also cited missing the seasons as a reason for her move. While San Francisco remains mild for most of the year, never getting hit by winter weather and rarely getting warm, upstate New York is blessed by four seasons.

"I love the countryside," she said of New York. "It's so beautiful up here. The seasons are amazing here, because you get these progressions. You can practically set your clock by the kinds of wildflowers you get in the middle of the summer and at the end of summer. You feel those seasons coming in your bones and it's really lovely. For a long time I didn't realize I was missing that, and I'm really enjoying it."

Klaus may have found the perfect home in her new town. She purchased an 1850 Greek revival Lutheran church, which she is slowly refurbishing to be both her home and a small bed and breakfast. She has done several gigs at Albany's New York Historical Society and has sung at the Harvest Festival before. She's also sung at a restaurant in Cooperstown, among other venues.

"Whatever works," she said. 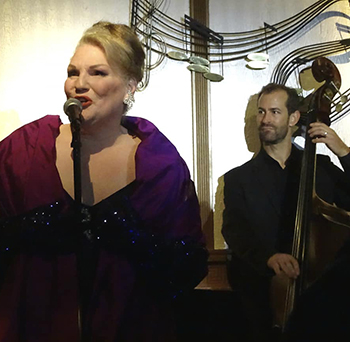 She said that she's excited to be returning to San Francisco and looks forward to seeing all her friends. She's also thrilled to be performing with the Tammy Hall Trio.

"Tammy is phenomenal," she said. "We've known each other since 1995 or '96. She's an incredible musician. There's such soul and depth to her playing. She's beyond intuitive. She really believes in the music above everything else. I can't say enough good things about her."

Klaus is drawn to the music of the '40s and '50s because of the unabashed romanticism. That music, she noted, doesn't have a problem saying, "This is how love feels, this is how heartache feels."

"The melodies were real melodies then," she said. "I'm not someone who hates everything else, but at the same time there's something really special about those pieces of music that have become standards. They've lasted for a reason."

"I like loads of different things," she said. "So it's hard for me to say one person."
Klaus is also a big fan of The Divine Miss M, Bette Midler. She recalls checking Midler's first album out of the library when she was in the fourth or fifth grade. She said she never brought it back!

"It was the first time I heard things that really spoke to me," she said of Midler. "Things that I related to, that I aspired to; the love. the joy, and the heartbroken songs, the drama of it. I just loved it and related to it."

When she makes her return engagement to Martuni's, Klaus said that she and the Tammy Hall Trio will be doing some new material, as well as some Joni Mitchell songs. Martuni's is her main venue whenever she's in San Francisco. It's a room for which she has a lot of affection. Klaus says it's a lovely place that feels like home, and she enjoys the intimacy of the room.

"It's a wonderful, community-supportive place," she said. "It's real homey and I love it."
But she'll also be glad to getting back to her new home.

"It's beautiful up here," she said of New York. "This community is very welcoming and very queer friendly and supportive."