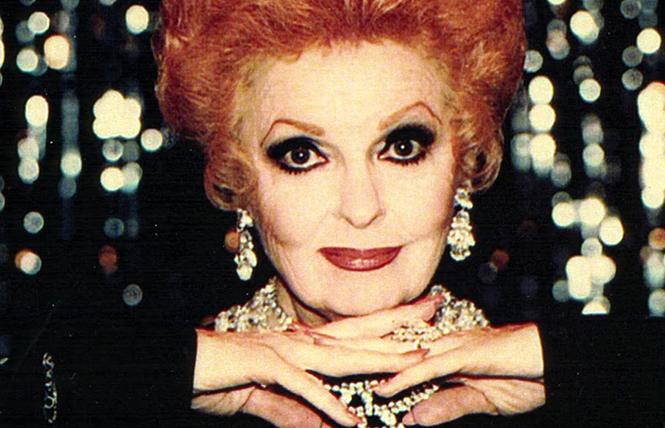 Carole Cook, the veteran actress who toured Australia as Dolly Levi, who played "everything from Medea to Mame," returns for her twenty-fifth performance at the Richmond/Ermet Aid Foundation's Help is on the Way benefit concert, August 18 at the Herbst Theatre.

While still witty as a whip, the 95-year-old actress, known for her comic zingers and decades of charity work, says this is her last show, for now.

An early contemporary of Lucille Ball, and a frequent guest-star on dozens of TV shows, Cook attained musical theatre legend status as the star of Hello, Dolly! following the late Carol Channing in the first Australian tour in 1965, as well as having the unique status of having played both Auntie Mame and Mame in both dramatic and musical Off-Broadway roles.

A longtime supporter of the LGBT community, Cook and Tom Troupe, her husband of 55 years, helped raise funds for AIDS/HIV causes before it even had a name.

"This is my twenty-fifth year," said Cook of her participation in the Help is on the Way concerts. "I've performed in all but two of the shows. I only missed one, when I had back surgery."

As an example of her devotion, mid-run of her national tour of Steel Magnolias, Cook flew overnight to perform in an REAF concert. Of her longtime relationship with REAF, Cook said, "We've grown older together. Now I'm into character parts."

"Carole Cook's first performance for REAF was in our third year (1997) and she was an instant hit, so we just kept bringing her back and proclaimed her our Grand Diva," he said. "She is a true comic genius."

"She's also performed in one of our holiday galas as well as a few of our One Night Only series of cabaret shows with touring Broadway casts," said Henderson. "She may be celebrating her 95th birthday this year, and her body may be slowing down a bit, but her wit is still sharp as a tack and she absolutely adores performing here and mingling with her fans. We also adore Carole and her husband Tom." 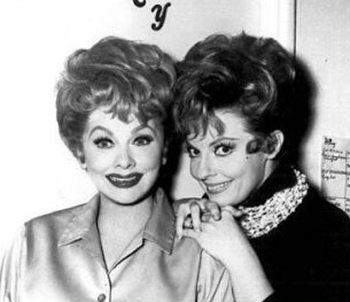 Carole Cook with Lucille Ball in the 1960s.

We've got elegance
Born Mildred Frances Cook in 1924 in Abilene, Texas, the actress' career highlights include creating the role of Maggie Jones in 42nd Street. Her touring shows include starring roles in Mame and Hello, Dolly.

Name a classic '70s or '80s TV series, and Cook's guest-starred, from 1963's The Many Loves of Dobie Gillis to Maude, Ellery Queen, Kojak, Murder She Wrote, plus a recurring role in Cagney & Lacey (lead costars Sharon Gless and Tyne Daly will also perform at the REAF benefit).

A natural-born storyteller, Cook was also a mainstay of 1970s and '80s talk shows. She cited Johnny Carson as a great interviewer.

Asked about her numerous appearances on The Merv Griffin Show, Cook said, "He was easy to talk with, because he never upstaged his guests. He was there to make you look good. He was never vying for attention himself."

Asked if she knew back then that Griffin was gay, she replied, "...as a field of poppies!" 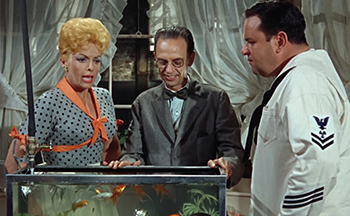 Although trained in serious theatre at Baylor University, with a Masters degree in Greek Drama, Cook's first starring film role was in the 1964 comic film The Incredible Mr. Limpet, where Don Knotts turns into an animated fish.

"To this day people with kids tell me how they enjoyed it, and their children do, too," said Cook. "In my heart, that one is very dear to me, not only as my first film. I was lucky, signing with Warner Brothers, and working with Don Knotts and Jack Weston."

Cook noted how good comic acting involved being serious as a character.

"I thought Hollywood had just opened up for me. I also learned the power of a close-up!"

Life is a banquet
Cook's career-changing moment happened around the same time, thanks to another famous redhead. While working on a production of Kismet for the Ohio-based John Kenley Players, Cook got a call from Lucille Ball.

"I knew Lucy was doing a revue for TV, and got a call before a show," recalled Cook. "Lucy called me in Warren, Ohio! At first I thought it was a joke. She wanted me to fly out to Los Angeles and audition for her. I was so tongue-tied, I didn't know whether to call her Mrs. Arnaz or Miss Ball, so I blurted out, 'Thank you, Mizz... Ar-Ball.' Years later, she signed a book for me as 'Lucille Arball.'"

"I came to Hollywood after I Love Lucy," said Cook. "She was in the middle of a divorce from Desi Arnaz, so it was a tense time. But she was always professional. She could compartmentalize things brilliantly. 'I just try to do that one thing at a time,' she'd say. She loved to rehearse, and rehearse." 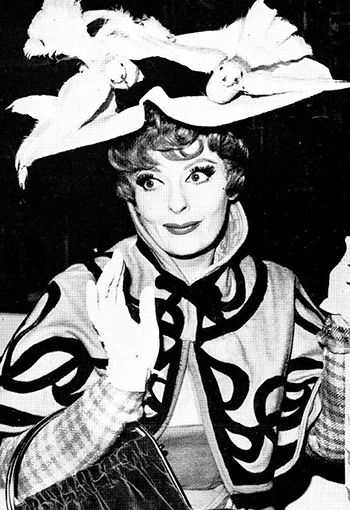 Carole Cook as Dolly Levi in the 1965 Australian tour of Hello, Dolly!

Cook eventually got to meet other greats in the performing arts, like Ethel Merman, and of course Carol Channing.

"I never was big on getting autographs," she said. "But getting a chance to see the greats on stage, that was more important. Growing up in Abilene, my mother used to drive us 200 miles to Dallas to see the stars on stage like Alfred Lunt and Lynne Fontanne."

Performing years later with her longtime husband Tom Troupe in plays like The Gin Game and The Lion in Winter, Cook said, "We were the Polish Lunts."

Before the parade passes by
Along with creating the role of Maggie Jones in 42nd Street, one of Cook's proudest achievements was starring in Hello, Dolly! as the first actress to play Dolly Levi, after Carol Channing, on tour in Australia.

Then working in Los Angeles for DesiLu Productions on The Lucy Show, Cook considered the conflicting choice: TV fame or her theatrical dream-come-true.

"My first love is the stage," said Cook. "I'd played the character of Dolly Levi in the original drama, The Matchmaker, so I knew that story, in a way."

Cook auditioned in New York, where, at the time, only Carol Channing had performed the role.
"I'd never seen the show, but I'd worked with the book writer, Michael Stewart, who got me a ticket. I immediately thought, 'Some day, I've got to play that part.'

Although her audition went well, "One never knows in this business."

Back in L.A, in rehearsal on a DesiLu sound stage, Cook got a call.

"The only nearby phone was under the audience grandstand, behind a pile of lumber," said Cook. "I got on the phone and heard two voices singing, 'Well, Hello, Dolly!'"

Those voices were none other than director Gower Champion and the show's book writer, Michael Stewart.

"At first, Warner Brothers didn't want to let me go," said Cook of her contractual obligations, also with DesiLu. "Who knows if I'd chosen one or the other?" 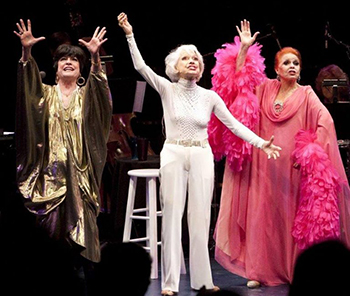 Saying that she'd be back in a few weeks or months, Cook didn't know that she's end up playing Dolly for two years, on the other side of the planet.

"He studied with Uta Hagen, and taught the kids in the show," said Cook. "We were having a fabulous time. Then the producers asked us to stay on and we went to New Zealand. To carry a show like that was fantastic. It was their Broadway. My costars were leading men and ladies."

"Wiggling her way down the stairs onto a ramp, this Dolly poured her heart and soul into the number, from which Hello, Dolly! boisterously took its name.

"This was a sequence that would galvanize Her Majesty's Theatre in Sydney, Australia night after night for nineteen weeks beginning in March of 1965 After her show in Australia, she made her travels to New Zealand for six months where she would perform in Auckland, Christ Church, and Wellington; two months in each city.

"This Dolly was tremendous! And the waiters... Well, they could have danced all night. Carole Cook led the Australian company of Hello, Dolly! playing Dolly to her fingertips, burstin' with life, and a fulfilling warm, natural instinct."

It only takes a moment
Cook's advocacy and support of People With AIDS goes back to the early 1980s, and, understandably, the musical theatre world. 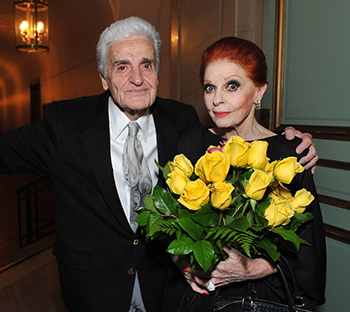 Tom Troupe and Carol Cook at a 2011 Help is on the Way gala. photo: Tango Diva

"One of the dancers, Ray, was getting sick. When he was in the hospital, his father disowned him. I decided then that this was my charity for life."

Another stunning moment for Cook was a few years later, when she saw actor Rock Hudson at a Hollywood car wash. Cook had worked with Hudson years before on his TV series McMillan and Wife, and wanted to encourage Hudson to consider playing Julian Marsh in a touring production of 42nd Street.

"The role requires more charisma than singing, so I thought he'd be good for it."

But upon seeing Hudson only months before his death, she knew he had AIDS, although he merely dismissed his ailment as 'heart trouble.'

"They called it the gay plague then," Cook recalls. "We would go to hospitals to visit, and have to wear masks. I never thought that we'd get it, but their immune systems would suffer. I just knew it was a blight for gay men. Tom and I had to do something. There were no organizations then. We pooled our resources, a little or a lot, to make sure they had food, that their pets were taken care of."

Cook and Troupe gave directly to people in need, since there were so few nonprofits at the time. "What we did was kind of a homegrown charity to help our friends." 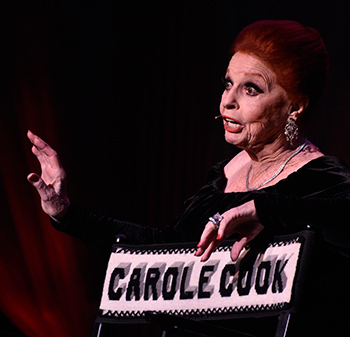 Open a new window
As her career continued, Cook and her husband have been given some due recognition.
In the national tour of Steel Magnolias, Cook, as the irascible 'Ouiser,' received the Helen Hayes Theatre Award. She has been the recipient of eight Best Actress Drama Logue and Robby Awards in Los Angeles.

In 1995, Cook received the Baylor University's Distinguished Alumni Award. In 2002, she and Troupe received the prestigious Theatre Ovation Award for Career Achievement, the first husband and wife team ever to be so honored.

But not Carole Cook.

"Along with the San Francisco shows, I go to Dallas to do charity shows and see my family," said Cook.
And only last year, Cook performed Back Where She Belongs, her autobiographical cabaret concert, in Los Angeles, at San Francisco's Feinstein's at the Nikko, and at Feinstein's/54 Below in Manhattan.

"I have a little crew of super-fans who see all my shows," said Cook. "I call them my Stalkers. They wear little pieces of jewelry or socks with my face on them. They're the ones who got me a star on the Walk of Fame in Palms Springs. They're adorable."