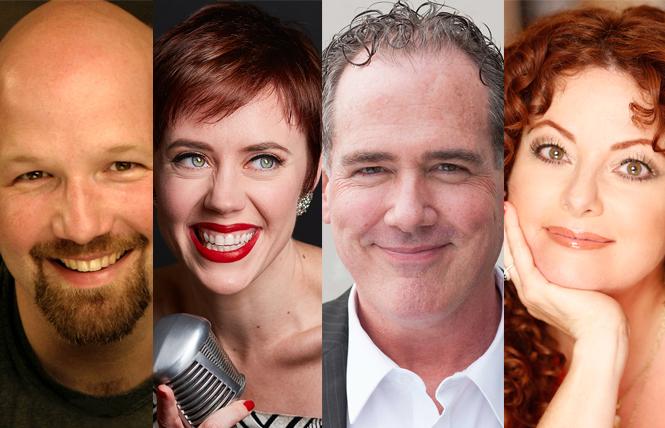 L to R: Scott Coulter, Carole J. Buford, John Boswell and Kelli Rabke perform in the new A Star is Born cabaret concert at Feinstein's at the Nikko.

A Star is Born is one of the most iconic and venerable tales ever to come out of Hollywood. First produced in 1937 as a drama with Janet Gaynor and Frederic March, the story has been remade three times as musicals. The premise of A Star is Born is simple: a young woman, a fledgling performer, meets and falls in love with a superstar who's battling substance abuse and dealing with burnout. As her career rises, his career falls. Often seen as a statement on the cruel realities of show business, the story is also shamelessly romantic.

Judy Garland starred in the first musical remake in 1954. Garland played Esther Blodgett, who becomes known to the world as musical comedy star Vicki Lester. James Mason co-starred as Norman Maine, her husband, the superstar on his way out. Garland, who scored an Oscar nomination for her work in the film, introduced one of her signature songs, "The Man That Got Away."

Barbra Streisand produced and starred in a 1976 version of the story, playing Esther Hoffman, with Kris Kristofferson playing her ill-fated love John Norman Howard. That film placed the story in the rock and roll world. Streisand would win the Oscar for co-writing the now classic song "Evergreen."

The tragic lovers were most recently portrayed by Oscar nominee Lady Gaga and Bradley Cooper in 2018. Their film was one of the year's biggest hits and introduced the award winning song "Shallow," which Gaga co-wrote.

On August 9 and 10, a tribute to the films makes its cabaret debut when Feinstein's at The Nikko presents A Star is Born: The Concert, a show which will offer live performances of songs from all three musical versions of the story. The show was created by Scott Coulter, a well-known performer in New York, and a favorite of legendary Broadway composer Stephen Schwartz, who said, "One of the greatest things that can happen to a composer is to have his music interpreted by Scott Coulter."

"Isn't that the most amazing quote?" Coulter said. "It's hard to put into words how that particular quote makes me feel. Stephen Schwartz was my musical hero long before I ever met him, so his words are doubly meaningful to me. Growing up, his music was a touchstone of sorts for me, so to have him appreciate my interpretations of what he created still stuns me."

Coulter spoke of how he came to create the show.

"I have a concert company called Spot-On Entertainment which creates concerts for symphony orchestras and performing arts centers," he said. "I always look for themes or ideas that speak to multiple age groups or demographics and A Star is Born does just that. Since 1937 every generation has had their version of this story. Well, every generation but mine, I should say. Every twenty years a new Star Is Born; 1937, 1954, 1976, and 2018. They just skipped over the '90s. My generation got The Bodyguard instead."

Coulter feels that the story resonates with audiences because it's so dramatic, referring to it as a "tortured love story." He pointed to 1954's "The Man That Got Away" as an extraordinary song, and the best of all the songs from the three musical versions.

"Each of the films contains an Oscar-nominated song," he said. "'The Man That Got Away,' 'Evergreen' and 'Shallow,'" he said. "All three are represented in the concert along with some expected songs and a few surprises."

Coulter pointed to the moments in each film where the Esther character is first discovered by the Norman character. Each of these moments is accompanied by a song: such as when Lady Gaga sings "La Vie En Rose" in 2018, or when Streisand performs "Queen Bee" in 1976. The concert will be looking at those moments.

In addition to Coulter, audiences at the concert will also hear the talents of Carole J. Buford, John Boswell and Kelli Rabke.

"I'm embarrassed to say that I've not seen all three versions, only the most recent one," Rabke said. "I definitely need to watch the others ASAP. I will say that not seeing the Judy or Barbra versions I was able to watch the new movie and evaluate it on its own terms as a film, without having anything to compare it to. The majority of the people I know have seen one or both of the other versions, and so much of the critique stemmed from the comparisons. I went in cold and kind of enjoyed that. And I liked the movie very much!"

Rabke feels that the story resonates with people because of the love story, which everyone can relate to.

"The concert takes you on a musical journey from the 1930s until today," she said. "There are so many musical styles represented by featuring songs from all three films," she said. "I think it makes for an interesting, varied, fantastic mix of songs. And by experiencing it in a cabaret setting —which is so much more intimate than a proscenium stage¬— hopefully we will take you on the journey along with us and be able to share all the emotion inherent in the songs and this story."

Rabke feels that we haven't seen the last of A Star is Born.

"This story obviously resonates with people since it continues to be told," she said. "Because the lead role has been played by three iconic women, it will continue to be intriguing to filmmakers and actors for generations to come."

"I'm sure there will be a new version just about twenty years from now," added Coulter. "However, I'm hoping that the next version really includes a star being born in the sense that the audience gets to discover a brand new talent. In every version to date, the star being born just happened to be the biggest star/vocalist of the day, with the possible exception of Garland, for whom the film served as a comeback, even though she was a bonafide star and a legend."

Coulter said that he was excited to be bringing this show to the Nikko.

"John Boswell is the greatest pianist in the world," he said. "Carole J. Bufford and Kelli Rabke are two of the finest female vocalists to ever set foot on a stage. I hope this is the first of many visits to the Nikko for all of us."