Branden and James: Classical crossover partners, on- and off-stage 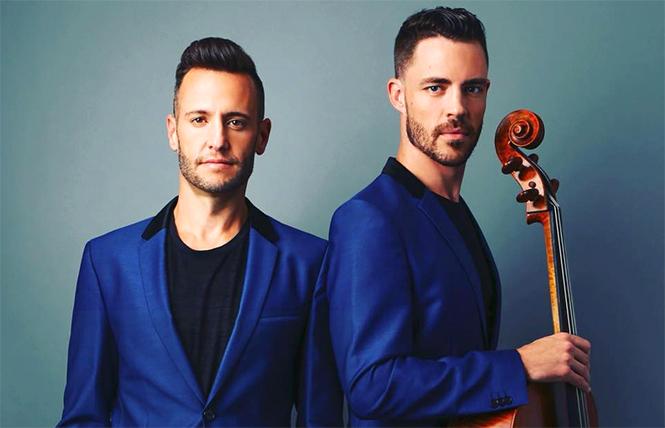 It was during Pride weekend of 2015 that Branden James and James Clark performed together publicly for the first time. The venue was Martuni's, the show was free and a tip jar was circulated. It was a particularly festive Pride that year, as gay marriage had just been legalized.

So there's a feeling of celebration around their return for this year's Pride, when they'll play Friday and Saturday night shows at Feinstein's at the Nikko. 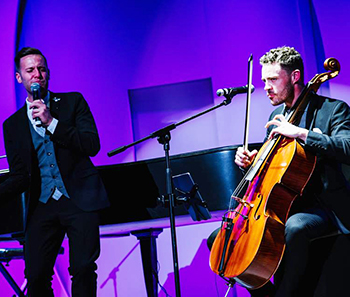 "I was raised a wide-eyed Christian boy in Orange County," he explained during a recent conversation between the Bay Area Reporter and the couple. "I came to San Francisco to study singing at the Conservatory of Music. It was really a coming of age for me, dating guys, experiencing gay culture."

Branden lived in the Sunset and Lower Haight, and sang for his supper at Max's Opera Café.

After graduating, he made his way to New York, which served as his home base for nine years during which he performed in the Metropolitan Opera chorus and sang with other companies around the U.S. and abroad. He also began to perform his own more pop-oriented cabaret concerts and piano bar gigs. In 2013, Branden's public profile was considerably raised when he competed and became a finalist on the eighth season of America's Got Talent.

James, 36, hails from Adelaide, Australia where, like his husband, he grew up in a religious family and listened mainly to Amy Grant and other Christian pop as child and teenager. But James was also classically trained in piano and cello from a young age and, after college, spent five years as a high school music teacher in Australia.

"In my heart of hearts, though," says James, "I never really wanted to be an orchestral cellist."
In 2012, he moved to the U.S. to pursue a masters degree at Cal State, Long Beach and seek work as a session cellist and arranger.

San Francisco Days
The couple met after Branden relocated to Los Angeles to pursue opportunities in the wake of his television success. James was hired to as the music director for a charity concert Branden was appearing in and the pair hit it off immediately, becoming fast friends who started to make music together, both literally and figuratively.

"I remember the first time we came to San Francisco together," says Branden, recalling a whirlwind tour of Lands End, Golden Gate Park and his favorite quirky taqueria, the Mexican Grill (which operates out of the Tart to Tart bakery shop near 9th and Irving). A few visits later, they were showcasing their musical collaborations at Martuni's (Both men have friends in town, who helped generate a turnout for the then-unknown duo's debut). 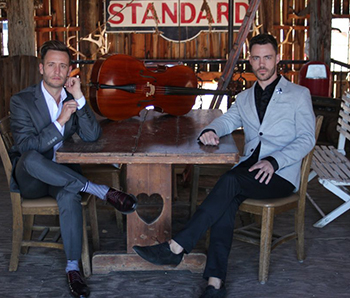 Shortly after that first gig, Branden received an unexpected offer to perform for five weeks at Vanessie, a piano bar in Santa Fe, New Mexico.

"It wasn't a direction I'd been planning to take," he recalls, "But James came along and it turned into a kind of laboratory for us. Five weeks turned into seven months. We spent so much time playing together. We started out taking requests, sight-reading and then really worked on getting our own arrangements down."

Santa Fe, says Branden, is the kind of town where the audiences tend to be people "who either have three houses or three jobs." The wealthy Texans and Oklahomans, and artsy music-loving locals who made up their early following gave the duo a diverse fanbase from the start.

Between patrons' word of mouth, the pair's own aggressive social media outreach, and their music business network, Branden & James began booking concerts and an extensive schedule of cruise ship residencies.

"At this point," says James, "I think about 40% of our audience is gay and the rest are just people who have come across us and enjoyed the music. We are both well-versed in the harmonic language of choral music. We tend to choose songs that are very melodic and lend themselves to a classical singing style."

"I think audiences sometimes expect that because I play cello, it's going to be sad, slow music, which isn't the case at all," he adds. "A lot of pop bands have been incorporating cello on their recordings over the past ten years or so. The timbre and tone production is similar to the human voice."

That said, for the most part, their repertoire leans toward adult contemporary sounds rather than the more rhythmic Top 40 pop or the deep house that Branden enjoys in his leisure time.

"We tried a couple Justin Bieber songs and a Britney Spears," he says, "but they just didn't work."