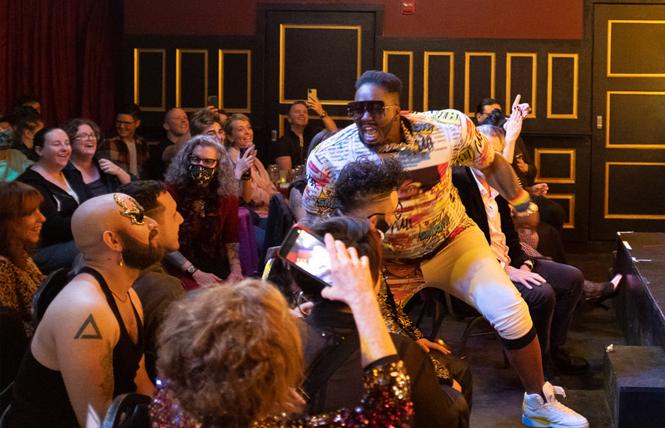 Revelers at Sunday's Folsom Street Market fair who wanted a drink had to show something more than an ID to the doorman at many of the bars — proof of COVID-19 vaccination.

Scott Richard Peterson, the general manager of the Powerhouse in San Francisco's South of Market neighborhood, said the leather bar instituted the policy last week in response to rising cases in the city and the rise of the Delta variant that is ripping through the nation.

"We practiced with it Wednesday [July 21] and by Thursday [July 22] we were just doing it," Peterson told the Bay Area Reporter. "There were a few people who didn't have access to it, and I expected that."

Peterson said that the number of people who expressed real distress was minimal. Individuals can either show their physical vaccination card, a picture of it, or their official state digital vaccine record.

"It was just a handful and mostly we were thanked again and again for starting to do it," Peterson said. "When you see what's going on around us, it's important that we encourage people to get vaccinated for the safety of our customers and staff."

COVID cases up as Delta variant surges
What's "going on" is that there has been a rise in COVID-19 cases citywide and statewide since the end of most pandemic-related restrictions on June 15.

The spread has prompted some jurisdictions, such as Los Angeles County, to reinstate indoor mask mandates even for fully vaccinated people. San Francisco officials joined most other Bay Area health officers July 16 in recommending, though not mandating, indoor masking again. (The exception is Solano County, which is not recommending or mandating face coverings.)

"We are asking our residents to collectively come together again in this effort to stem the rising cases until we can assess how our hospital capacity will be impacted," San Francisco Health Officer Dr. Susan Philip stated at the time.

The U.S. Centers for Disease Control and Prevention updated its face covering guidance July 27 to state that fully vaccinated individuals should wear face masks in counties with "substantial" or "high" COVID-19 transmission rates. "Substantial" is defined as more than 50 cases per 100,000 in seven days and "high" is defined as 100 cases or more per 100,000 people in seven days. San Francisco County has a "high" transmission rate by this indicator.

President Joe Biden framed the new guidance as "another step on our journey to defeating this virus."

"Today's announcement also makes clear that the most important protection we have against the Delta variant is to get vaccinated," Biden stated. "While we have seen an increase in vaccinations in recent days, we still need to do better." 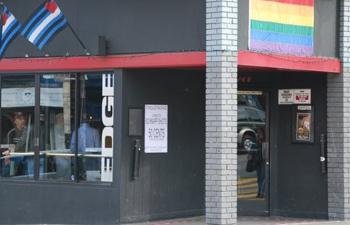 The Edge is one of several Castro bars that now requires proof of vaccination to enter. Photo: Courtesy GayCities.com

SF bars announce new policy
The fear of rising cases and further government action is prompting bars to come up with solutions themselves. On July 26, the San Francisco Bar Owner Alliance — which represents over 500 bars across the city — announced a policy requiring proof of COVID-19 vaccination or a negative test result within the past 72 hours, which will go into effect July 29.

D'Arcy Drollinger, a gay man who is an owner of Oasis, a bar and nightclub in the SOMA neighborhood, is part of the alliance, but decided to institute a proof of vaccination policy last month.

"We did it when we originally opened on June 26," Drollinger said. "But we saw most of the city — including most theaters and special event venues — were not requiring that, so we dropped it. When it became apparent the Delta variant was more problematic than anticipated, we reinstituted it on Thursday [July 22]."

"We are a venue that houses lots of different events and groups of people, so it's been important for me to make sure that people feel safe and are safe," Drollinger said. "Vaccinated people are obviously getting this new strain but, you know, while it's not quite as scary, it's still a problem and I'd rather be proactive so the city can stay open. Nobody wants to go back."

Drollinger said that last weekend almost all people were "grateful" for the policy.

"We had a couple people get mad because they only had one [vaccine dose] so our security had to deal with a couple of angry people," Drollinger said. "Some people had a hard time locating it, but there is a QR code you can get on your phone. Some people actually had their cards. Once you go through it a couple times, it'll be like showing an ID."

Some 84% of San Francisco residents 12 and older have received at least one vaccine dose; 77% are fully vaccinated, according to city data as of July 26.

The Hole in the Wall Saloon and Club OMG, in SOMA; the Cinch Saloon on Polk Street; and 440, Lookout, The Edge, Beaux, and Midnight Sun in the Castro, also now have proof-of-vaccination policies (or alternatively, require a recent negative test).

Patrons at 440 on July 27 were supportive of the new policy there.

"I've been vaccinated since the end of April and if I have to wear a mask or carry a card I have no problem," Matthew Hensley said.

Hensley, who pointed out he is a long-term survivor of HIV, said that he brings his mask everywhere he goes.

"If I can help someone else from getting something, I'm happy," he said.

Matthew Hudson reflected on the differences between how COVID-19 and HIV/AIDS have been treated.

"With HIV, nobody would give a shit," Hudson said. "There was no help. Now, everyone is begging you to get a shot to get you through the second pandemic."

Jim Sullivan, who was sitting outside, also agreed with the policy.

The Edge implemented its policy July 26, according to a Facebook post, which adds that like the Bar Owner Alliance a negative test from the last 72 hours will suffice for those who are not vaccinated.

The policy was instituted "in the interest of protecting our customers, our staff and their families," The Edge stated.

Lookout stated it will be implementing its policy July 29. "Your physical card, a pic in your phone or a QR code from the state" will suffice, according to the bar.

"The recent resurgence of cases in San Francisco due to the Delta variant was a driver of the decision," Hastings stated in an email. "As a venue I believe we have an obligation to provide a safe space in every meaning of that term, and simply put, this is an example of us doing that.

"Hopefully taking this proactive measure will not only diminish the likelihood of future government-imposed restrictions being placed on us," Hastings added. "So far the response from our regulars has been overwhelmingly positive and supportive."

Rakesh Modi, a queer man who owns Club OMG, had a similar sentiment.

"At OMG the health of our staff and patrons is of utmost importance," Modi stated. "And in order to keep everyone safe from the rising number of COVID Delta variant cases, we have decided to only allow people who are vaccinated into the bar. Bars can not afford another shutdown either, so we have to do everything we can to curb the spread of this virus."

Steamworks Baths in Berkeley and the Eros sex club on upper Market Street also require proof of vaccination, as the B.A.R. previously reported.

The Hole in the Wall Saloon, the Cinch Saloon, 440, The Edge, and Beaux did not return requests for comment for this story.

Centers to study COVID-19's impact on queer Americans
Sign up!