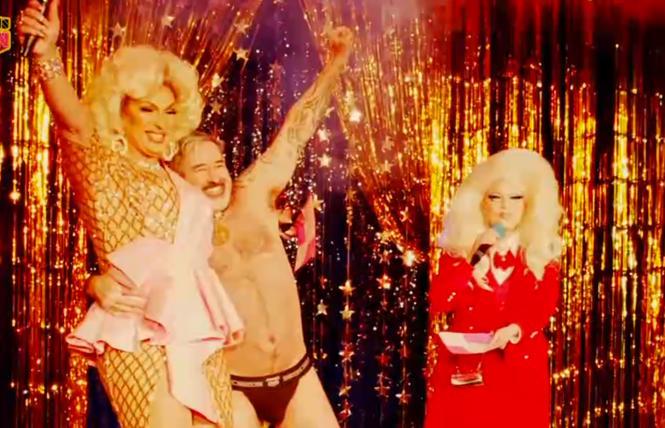 D'Arcy Drollinger (left) and other participants as Oasis' telethon reached $200,000 in donations.

In what will undoubtedly be recalled as the biggest drag fundraiser in local history, Oasis nightclub's 12-hour three-camera marathon telethon more than doubled the initial goal by raising more than $253,000 through the club's March 6 online event.

Streamed live from Oasis, the benefit, whose original target was a mere $100,000, also included several recorded tributes from celebrities, dignitaries and drag talents. Host and owner D'Arcy Drollinger was joined by a bevy of guest-hosts, Dot Comme and Afrika America among them, with Mama Celeste and God's Little Princess, both injured, who nevertheless provided hilarious snark late in the event.

Just offstage, heading up the "call center," Patti from HR (aka Michael Phyllis) offered witty comments as gogo guys and dragsters took donor calls. More funds flowed in through the online link as the entertainment cavalcade continued, with merely a few technical glitches. 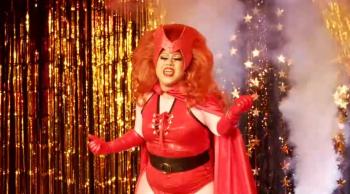 Foxxy Blue Snacks lip-synched to "Whole Lotta Woman," and in a short interview, commented, "We get to see our art fully realized here, and we have an opportunity to help out. We have formed an ecosystem here. The House of Snacks will always show up for D'Arcy and Oasis."

Testimonials included video messages from Supervisor Matt Haney, Mayor London Breed, Fauxnique, April Kidwell, Sasha Velour, Cindy Wilson of the B-52s, Carnie Asada, Varla Jean Merman ("We don't want to say, 'Remember Oasis?'"), and a sweet riff from John Cameron Mitchell, who redid a few lyrics of "Wig in a Box" from his own musical Hedwig and the Angry Inch. 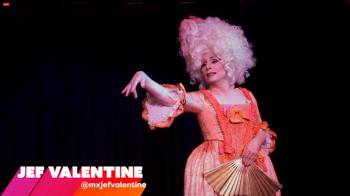 "Community; this is a rich, true community" said April Kidwell (Showgirls the Musical) in a touching video tribute. "I'm so proud of Oasis, how they've really survived, and stepped up to the plate to survive."

She also cited Baloney as a favorite. "Where else can you throw money at your hot gay friends?"

In a charmingly minimalist video, Lil Miss Hot Mess (just out of focus) lip-synched to "Memory" with tiny toy cats on a table, followed by her reluctant real cat knocking over the toys. Lisa Frankenstein's pink teddy bear/thrash metal video was simultaneously cute and disturbing.

Who stole the show? Drunk Drag Broadway's "One More Day" group Zoom performance of a quarantine parody of the Les Miserables anthem stood out for its multi-tiered edit and timely lyric rewrite. 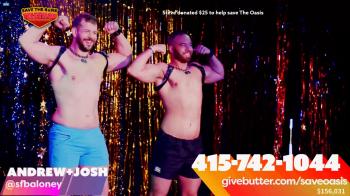 Milita Scunt worked the crowd and death-dropped for dollars (Remember crowds?) set to a Beyoncé medley, and Valentine worked a Marie Antoinette coif and costume as he performed to Barbara Cook singing "Glitter and Be Gay" from Candide. Ma Shugganuttz parodied Elton John's "Rocketman" with dildo-wielding backup dancers.

Hunks appeared as well, including members of the popular Baloney Boys troupe. Some stripped for donations, auctioned off their jock straps, and one even recited Hamlet's "To be or not to be" soliloquy. Other Baloney content included an excerpt from a film about the ensemble, including footage of their saucy sexy car wash & cocktails fundraiser.

Heklina even made a return appearance, noting her current "caftans and unemployment" life in Palm Springs. Heklina joked, "Any donations in my name will keep me from moving back. You want me to stay in Palm Springs? Send money." 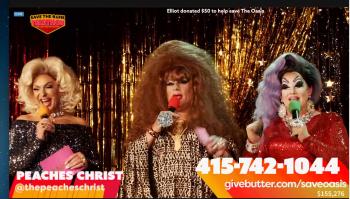 And Peaches Christ popped onstage to offer some sass and sincerity, noting how, after years hosting events in now-closed venues (Rebel, The Stud), Heklina and D'Arcy "fought hard to find and build Oasis. It is just too devastating to consider that after six years this could be gone. In San Francisco, not since Josie's Juice Joint has something like this existed. We all have an opportunity to save this. The city is ravaged, but that may be a good thing. Rents right now are at an all-time now. So you freaks, artists and weirdos out there; consider coming back. It's time to rebuild, and Oasis could be the clubhouse from which we rebuild it. All of us who fought to stay; we're inviting you home."

As the event reached $150,000, Drollinger said, "Now I have so much hope and courage, not just for Oasis. We want a real San Francisco to be here when this is over."

Coco Buttah helped auction off Mr. S harnesses and Folsom Street Fair packages, Trixxie Mattel's crossword gown, and other items. As donations poured in from local fans and as far away as Vienna and Croatia, Stage Manager Otter's clean-ups made D'Arcy nostalgic for "real-life drag shows." 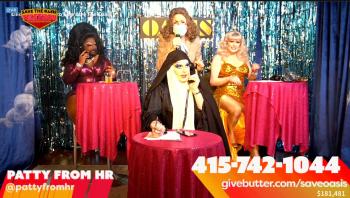 By 6pm, the fundraiser reached $180,000. "I love seeing all these performers. We're getting a hint of the old days," noted Drollinger.

"This is what we call progressive community giving," said onstage guest Afrika America as she thanked $500 donor Kylie Minono.

For the 11:45 near-finale, several Bay Area drag performers took on various lip-synch roles set to "We Are the World." Fave? Nancy French as Bob Dylan. 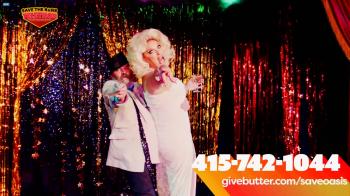 Glamamore and D'Arcy Drollinger, "Under Pressure"

Said Drollinger of the event's success, which had more than 2,400 donors, "What we're doing now is banking on the future, so we can keep the rent paid, the bills paid, and weather the storm so we can be here when this is over."

By midnight, with wacky late acts like Lucinda Puss, the telethon happily went overtime to reach "a quarter of a million F-ing dollars!" said Drollinger. James Callahan of Piedmont Pianos donated $2,000, bringing the total to $251,456.

"We were in drag since 9 A.M.," exclaimed event producer Snaxx, as another $500 rolled in. She joined Drollinger onstage in the last hilarious hour (either drunk, exhausted, or both), thanked the numerous technical and social media assistants. "We are all there for each other, especially today."

The amazing event closed with Drollinger and Glamamore's improv to the Bowie/Queen classic, "Under Pressure."

Said Drollinger before the telethon's end, "We made our goal three times over because of you. Thank you for believing in what we do."

Donations are still being accepted at www.sfoasis.com