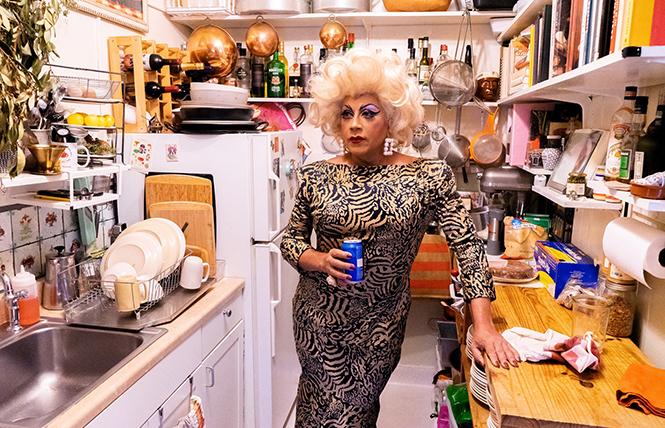 The Covid-19 pandemic is hurting the community in more ways than one. Scores of businesses were forced to close their doors when the shelter in place orders from San Francisco Mayor London Breed and California Governor Gavin Newsom took effect.

The arts and nightlife communities have been hit particularly hard, with venues including Oasis and Manny's in San Francisco and The Alice Collective in Oakland seeing their revenue streams disappear overnight. Many performers are also hurting, such as drag artists Peaches Christ and Poly Poptart, who were forced to postpone or cancel shows as the places where they perform shuttered.

It's all for our own good. Closing these venues, not congregating in crowds, is the only way to stop the spread of the Coronavirus, the deadly microbe which causes Covid-19, a life-threatening respiratory disease which has already killed tens of thousands around the world.

LEFT: Sue Casa and D'Arcy Drollinger (center) with dancers at the premiere of PopTart at Oasis. photo: Gooch RIGHT: Peaches Christ will break out soon! Photo: Jose A. Guzman-Colon

An Oasis of civilization
Some in the nightlife community have pulled themselves up by their bootstraps and helped themselves, such as drag artist D'Arcy Drollinger, who co-owns the ever-popular Oasis in SoMa. Drollinger has launched an Indiegogo campaign to help keep the club afloat and to help his staff offset their financial loss during the shutdown. So far the campaign has raised more than $40,000 of its flexible $50,000 goal.

"I am overwhelmed by the show of support and belief in what we do and the space Oasis holds in the heart of the community," Drollinger said. "In times like this, the financial part is crucial, but the emotional support is really just as important. Other ways we have been rallying support and keeping Oasis alive in people's homes: I taught my dance class Sextitude live-streaming on Sunday to help raise money specifically for my staff."

Drollinger is also streaming past Oasis performances, such as their onstage tribute parodies of Three's Company, Sex and the City, and The Golden Girls. These will be up for free for a limited time with the option to donate. To help the fabulous queens and kings who've performed at Oasis, the club is posting past numbers performed at the club on the Oasis Facebook page, with the performers' Venmo handles, allow viewers to offer tips.

"This global experience has pushed inventive new ways to create online content and to interact with the community," said Drollinger.

MORE! from less
"I'm happy to go over this with you as many times as needed," writes drag hostess and event producer Juanita MORE! "Stay the fuck home. I know, it's not easy, and it's your friend's birthday, so you all want to go out for dinner and drinks. But no, again, stay the fuck home. Be responsible for yourself as well as those around you."

Said MORE, "Those funds will be used to help to provide economic relief to workers in the Bay Area nightlife industry that are eligible to receive support such as bartenders, entertainers, DJs, dancers, drag performers, artists such as production and lighting designers, producers or organizers of nightlife events for as long as the current crisis continues."

Peaches' keen
Joshua Grannell, aka drag superstar Peaches Christ, took a big financial hit when his August 14 Castro Theater show Drag Becomes Her was postponed due to Coronavirus concerns. Grannell said that the show has been rescheduled for August 29 and that he plans to sell Drag Becomes Her T-shirts online. He's also trying to book as many Peaches Christ messages on the Cameo app as he can.

"Cameo is an app where you can book your favorite 'celebrity' to send you or a loved one a personal video message," Grannell explained. "Right now, I've noticed that folks in the arts, other performers, and nightlife folks are really trying hard to support each other personally, checking in on each other, promoting each other's online events and fundraising efforts. I think we're all struggling to figure out how best to survive this. I'm checking in on friends that live alone, running errands for seniors and immunity-compromised folks; doing what we can." 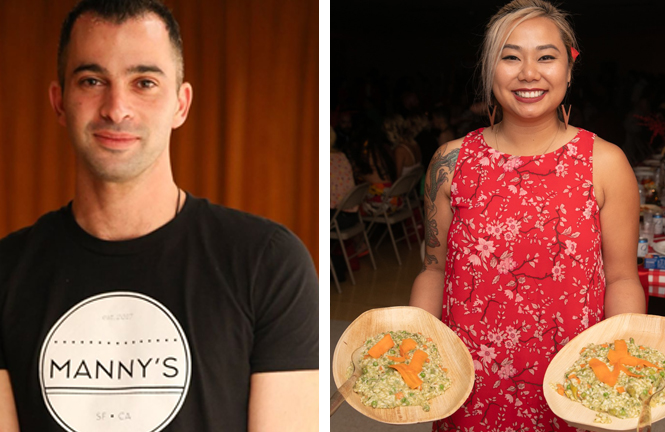 Manny-ing battle stations
Manny's, the popular coffee shop that hosts many political gatherings, is also finding ways to get through the shutdown.

"We've been working around the clock to organize a series of live online civic conversations with civic leaders, elected officials, artists, journalists, business CEOs, and medical professionals to engage the public and bring in the donations we need to keep things going," said Manny's owner Emanuel Yekutiel, who is gay.

Yekutiel said that it was "heartwarming" to see people donating what they can to support the space. He noted that help from the public and the government was needed to help brick and mortar businesses get through this storm. He added that he was personally supporting the queer nightlife fund.

"We're helping other businesses by sharing their fundraising pages, providing one on one friendship and advice to other small business owners, utilizing my position as a small business commissioner to distribute information about what the local, state, and federal governments are doing to provide relief to our industry, and by organizing these civic conversations to be of service," said Yekutiel.

Go ask Alice
The Alice Collective, a popular Oakland spot that had just started hosting a weekly brunch with drag artist Poly Poptart, has also been forced to close.

Madison Kaviyakoen worked at The Alice Collective as the Beverage Director and Drag Brunch producer until she was laid off due to the Covid-19 crisis.

"Since getting laid off, I have band together with other unemployed chefs and bartenders in Oakland to continue cooking," she said. "We are all doing our best to make ends meet for basic needs by doing what we do best and that's hospitality. We are called Magnolia Street Food based in West Oakland.

"We are making sandwiches and brunch plates twice a week and posting them on Instagram. People are also donating so we can make food and deliver to local medical professionals. It's beautiful to see all the love and support during this time of crisis. Hospitality doesn't stop for us." 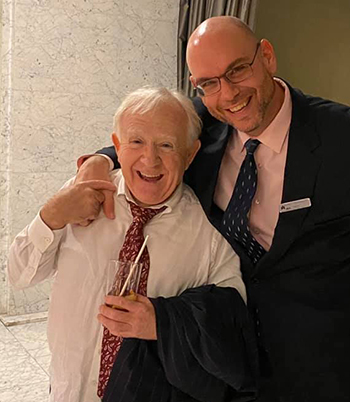 Life is a cabaret
Randy Taradash, creative director for Feinstein's at the Nikko, the hugely popular downtown cabaret which has hosted many gay performers, is optimistic about the future of nightlife in San Francisco.

"It is my true belief, as someone who has been doing this for the past twenty five years, that when we are able to and when it is safe people will flock back," he said. "Because live entertainment is food for the soul and nothing beats being in the room and sharing that moment together, whether it's live music or theater, those moments that we can share with a stranger sitting next to you, it can't be beat."