From Stonewall to the White Horse: The Bay Area's part in uprisings that changed the world 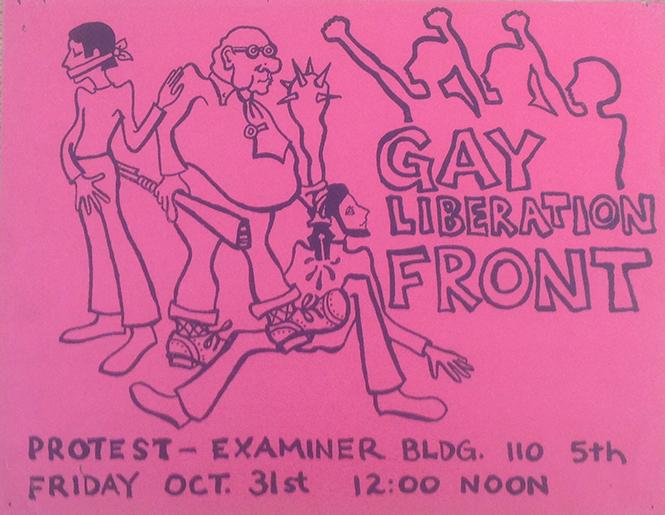 "San Francisco is a refugee camp for homosexuals. We have fled here from every part of the nation, and like refugees elsewhere, we came not because it is so great here, but because it was so bad there. By the tens of thousands, we fled small towns where to be ourselves would endanger our jobs and any hope of a decent life...." 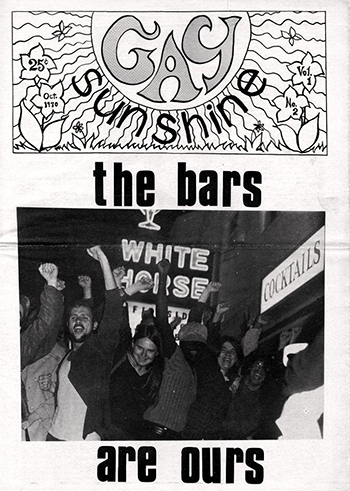 By the time of the first night of protests at New York City's Stonewall Inn, San Francisco had experienced months of demonstrations related to gay rights that would continue for the next few years.

Unlike Stonewall, the disturbances in San Francisco started over job rights, and a bar was not involved. But because the disturbances spread and issues multiplied, they would eventually include at least three bars, including Oakland's White Horse.

The people who lit the fuse were recent arrivals. Gale Chester Whittington came from Denver in 1968 and Leo Laurence from Indianapolis in 1966.

Whittington got a job as an accounting clerk at the States Steamship Company (320 California).

Laurence was a journalist for the underground newspaper Berkeley Barb and the editor of the Society for Individual Rights magazine Vector. They met when Whittington volunteered to write for Vector.

A Vector photographer shared a photo from a shoot of Laurence and Whittington with The Barb. It was paired with an article from March 23, 1969, titled "Homo Revolt: Don't Hide it."

The article covered Laurence's editorial call for gay revolution in Vector. Since the Barb had sex ads, it was read by several of Whittington's straight colleagues at the shipping company. The day it was published, Whittington was fired. Because of the editorial Laurence was removed as editor of Vector. 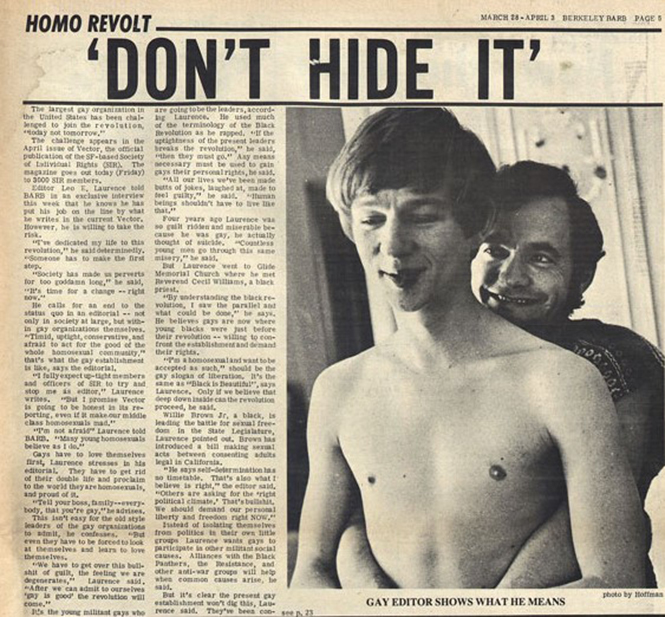 Whittington and Laurence then formed the Committee for Homosexual Freedom. Max Scheer, editor of The Barb, promised to cover their actions. On April 9, 1969 the picketing of the steamship company began with signs saying, "Let Gays Live," "Free The Queers" and "Freedom for Homos Now."

The protests continued for months. In May, The Advocate picked up coverage of the protests and by June the Rev. Troy Perry had begun a sympathy strike at the company's Los Angeles offices.

Ultimately the protests didn't succeed in getting Whittington's job back, but because the San Francisco Chronicle, The Advocate and The Barb covered the protest (on an almost weekly basis) it spread the word nationally and CHF grew.

In Whittington's autobiographical work, Beyond Normal: The Birth of Gay Pride, he mentions that Hibiscus and Lendon Sadler (of the Cockettes) and Carl Wittman (author of Refugees from Amerika: A Gay Manifesto) all took part in early CHF protests. Wittman read early drafts of his manifesto to the group.

By May protests spread to a second site: Tower Records. Employee Frank Denaro was fired after a security guard reported to management that he had returned the wink of a male customer. Unlike the steamship company, however, the record store was swayed by public opinion and by June the management offered Denaro his job back. 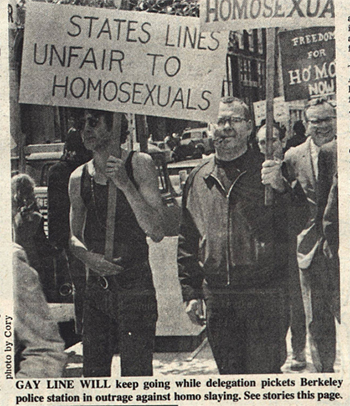 Purple rain
News about what was happening in San Francisco continued to spread. Berkeley Tribe printed a letter saying Laurence's articles, reprinted in a Minneapolis campus newspaper, had inspired a class in Homosexual Revolution from their Free University. In Beyond Normal, Whittington relates he received a telegram from New Yorkers who were at Stonewall and had been inspired by articles in The Barb. In October, both Laurence and Whittington were interviewed in the L.A. magazine Tangents.

By October 1969, Gay Liberation Front chapters opened in Berkeley and San Francisco. Two protests on Halloween show both coordination and fragmentation between new and old organizations.

At the first, called "Friday of the Purple Hand," the Society for Individual Rights worked with CHF and both GLF groups to protest the editorial policies of the San Francisco Examiner. Earlier that week, Robert Patterson of the Examiner had written "The Dreary Revels of S.F. 'Gay' Clubs" which referred to gays as "semi-males" and lesbians as "women who aren't exactly women" as well as referring to both as deviates.

Around 100 protesters picketed the Examiner building, and then had printers ink dumped on them from an upper floor by Examiner employees. The protesters used the ink to make purple hand prints all over the building (which gave the protest its name). The protesters were then attacked by the police Tactical Squad. Twelve people were injured and fifteen were arrested. 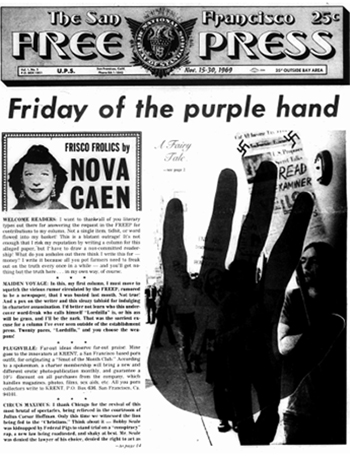 The second event that day was a protest of the Beaux Arts Ball in the Merchandise Mart by Gay Guerrilla Theater and the Gay Liberation Coalition. Laurence reported in the Berkeley Tribe that the protest was focused on the acceptance of laws that only allowed drag on Halloween and New Year's. He reported:

"I don't dig drag myself (can't imagine being a bearded lady)...but by God, I do feel the drags should have the right to do their thing; not just twice a year, but every day; not just at a drag ball, but at work, school, church and on the streets."

This was among the first confrontations between older gay organizations and newer, more radical groups. Others included a protest of a S.I.R. dinner in February 1972 where Willie Brown was speaking on reforming sex laws (protested because of the cover charge of $12) and a takeover of the North American Conference of Homophile Organizations (NACHO) by the Gay Liberation Front in August 1970. GLF demanded that NACHO affirm its support of the Black Panther Party and Women's Liberation and organize a national gay strike.

Clearly there was a generational difference between members of homophile organizations and the gay liberationists. Many of the younger generation had ties to the New Left and anti-war movements.

Laurence had been in Chicago for the '68 Democratic convention and Wittman had written for the SDS before, for example. GLF members formed a gay contingent for the Nov. 15, 1969 Moratorium March Against the War. And by and large they read the underground press, not the gay press. 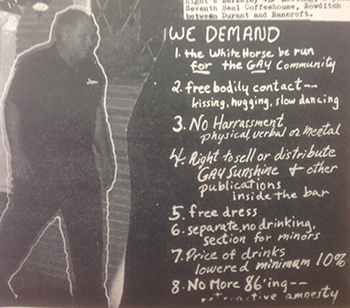 Horse sense
The most dramatic confrontation between gay liberationists and gay bars came at the White Horse Bar in Oakland. Konstantin Berlandt, a long-time gay activist in Berkeley, was thrown out of the bar for selling Gay Sunshine by the owner Joe Johansen. The Gay Sunshine collective worked with the Berkeley GLF and picketed the bar. A list of demands included one that patrons be allowed to touch one another and slow dance. Within a week the bar capitulated to the protesters.

The White Horse wasn't the only bar to raise the ire of liberationists.

Leonarda's also refused to sell Gay Sunshine and a boycott was suggested (it's hard to know how serious to take this, as the underground press kept reporting the bar's name as "Leonardo's"). The Stud also upset writers at the Berkeley Tribe by checking IDs at the door. They may, however, have just been opposed to bars as institutions. The article in the Tribe suggested:

"The bars can't be liberated, they must be destroyed. They rip off our money, keep us in ghettos playing the same old weary games thinking that we are satisfied, and maintain all the divisions in Amerika — women and men, gay women and gay men, black and white, young and old. The Stud mentality in our heads has to be rooted out and killed too."

Ultimately it was not the bars but the gay liberationists that disappeared as the 1970s progressed. I asked Gary Alinder, who was a member of Berkeley's GLF, about burnout and the disappearance of Gay Lib in the '70s.

"It evolved," he said. "Gay liberation was a sudden uprising. Most of us were anti-organization. It was not meant to stay around for a long time. It was a burst of energy — an explosion. A second generation would come along that was more organized. But the message — to make people happy in themselves and come out — was valid."

That burst of energy had a massive effect — it spread through LGBT organizations with programs like gay rap sessions to campuses across the country and created an explosion of new publications. Those publications and organizations did reach people. As a teen who picked up the Detroit Gay Liberator in the early '70s, and who attended a gay rap meeting on my college campus, I can testify that those of us who followed were grateful for the work of the Stonewall generation.