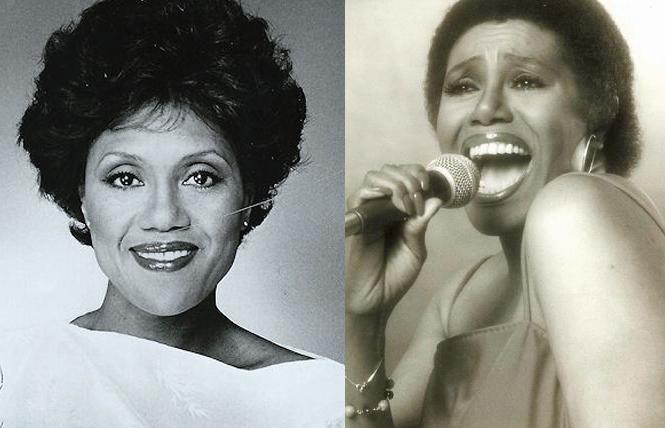 When you think of a musical connection to Bakersfield, you might recall Buck Owens and the Bakersfield sound. But you probably don't think it had much of an influence on San Francisco in the 1960s. However, two sisters, Ann and Maxine Weldon from Bakersfield, performed in clubs beginning in the 1950s, and developed relationships with their gay audiences that came to benefit both the audience and the performers. 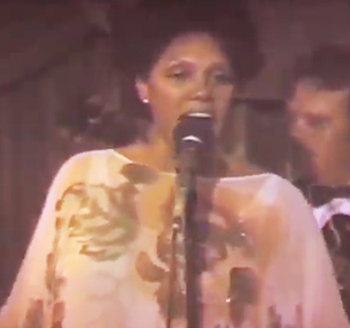 The Weldon Sisters were born in Wetumka, Oklahoma and their parents (who were farm workers) moved the family to Bakersfield in 1941. Reflecting on her young exposure to music she told the San Francisco Chronicle:

"Daddy was a minister and although the religion dictated no movies or dancing or music, I can remember hearing the gut bucket blues, black hillbilly - that whole scene, because deep down Daddy was really liberal."

Regardless of religious notions about music and acting, the family apparently had the performance bug. Aside from Ann and Maxine, their sister Jewel was also a singer. Brother Charles was an actor who led the Negro Ensemble Company until his death last year. 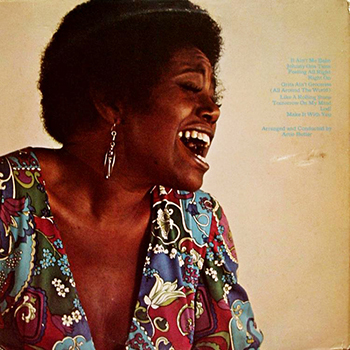 Maxine Weldon on a 70s album back cover.

In the '50s Ann Weldon released two singles, "Thanks a Lot, But No Thanks" and "You're Hurting Me" which got her on the radio and brought her to the Venetian Room in 1956. This initial phase of her career lasted for a few years and she came back to perform at the Hollow Egg in North Beach, billed as "the girl with the deep velvet voice."

Weldon returned to San Francisco in 1966 and performed for several months in both 1966 and 1967 at the 524 Club, a gay club that was earlier known as the Paper Doll. It was during a performance in autumn 1967 that William Ball from American Conservatory Theatre came to see her and offered her a role in Edward Albee's play, An American Dream. That was the beginning of her acting career.

Already by 1967, Weldon was showing a penchant for activism in her performances. In June 1967, she performed at a service at Glide Memorial which also featured the author Lenore Kandel protesting "San Francisco officialdom's rejection of hippie visitors." 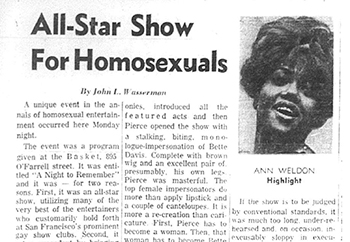 All-Star Show For Homosexuals as described in the Chronicle.

Throughout the late '60s, Ann, together with her sisters Maxine and Jewel would perform in a number of jazz worship services at Glide.

In 1968 Maxine Weldon began performing in San Francisco clubs as well. For several months at the end of that year and into 1969, she was performing at Leonarda's (16 Leland) with the Randy Randolph trio. Leonarda's was a restaurant, bar and nightclub with both lesbians and gay male patrons in Visitation Valley. It was owned by Margaret "Peg" Clark, who would later open Peg's Place on Geary. In describing Weldon's audience at Leonarda's in a return engagement in 1971, the Chronicle critic, John L. Wasserman said:

"The motley crowd — black and white, gay and straight — cheered her every song and strut (her gown was slit on both sides to the waist), gave her a standing ovation and lined up to buy autographed albums."

On Feb. 17, 1969, Ann Weldon with the Randy Randolph trio performed at "A Night To Remember" with Charles Pierce, Carol Doda and the comedy troupe the Jiants at the Basket (895 O'Farrell) which was billed as an "All-Star Show For Homosexuals" in the Chronicle. Reflecting on the event in 1972, Charles Pierce said, "The most fun time I ever had was when we did 'A Night To Remember' with The Jiants, Ann Weldon and Carol Doda." 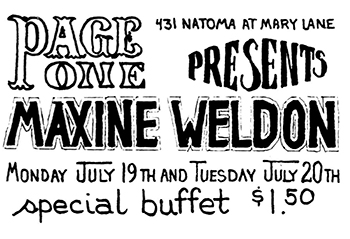 Ad for Maxine Weldon at Page One

The reaction of the straight press to gay venues was less than stellar during this period.
The jibes varied from a reviewer who referred to the 524 Club as a "slightly unlikely spot" to Wasserman saying that at the Basket show that it was so quiet "you could hear a false eyebrow drop." Wasserman went on to blame gay clubs for the sister's failure to break into the big time, saying in 1971:

"Their night club work has been at places which, to one extent or another, were known as 'gay' clubs: The Paper Doll, the Chez Chou Chou, etc. And such clubs, for no good reason, are the untouchables of show biz. Critics don't take them seriously; agents, managers and the like don't scout them for the next Billie Holiday or Bob Dylan."

Perhaps reflecting on her discovery by A.C.T. while performing at the 524 Club, Ann Weldon was having none of this. Regarding her eight-month engagement at the 524 Club, she told B.A.R's Donald McLean (in 1973):

"It was better than any club I've ever worked — a great experience. A lot of so-called Gay men could teach so-called straight men how to be gentlemen. I hate people not getting to like each other more and people who are too uptight about homosexuality, race and religion." 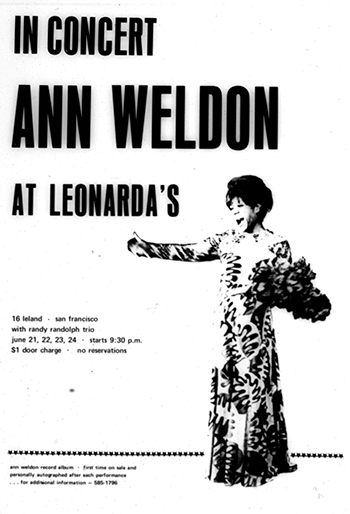 Ad for Ann Weldons concert at Leonardas in a 1971 Vector magazine.

Ann Weldon was a strong supporter of the Society for Individual Rights (S.I.R.), an early San Francisco gay rights organization. When Willie Brown was the keynote speaker at a political event for the organization in October 1970, Vector magazine reported:

"Singer Ann Weldon attended the affair and was urged by a cheering crowd to sing. Miss Weldon, who will soon appear regularly, again in San Francisco, sang the appropriate 'Born Free.'"
Ann Weldon would go on to headline a benefit for S.I.R. with Divine, David Kelsey, Cass Daley, Laverne Cummings, John Rothermel and Pristine Condition in October 1972.

It was certainly not the last of the benefits that the sisters would perform at. Ann Weldon performed at a benefit for the Pride Center in 1982 and Maxine Weldon performed for the East Bay Assistance Fund and Adopt-A-House AIDS charities in 1987.

The sisters expanded their repertoire throughout their careers. Ann went on to act on stage on both coasts and developed a film and television career as well, appearing in Shampoo, Roc, Married With Children and Six Feet Under. Maxine appeared on The Midnight Special, The Tonight Show and Soul Train, and as a television actress appeared in both Matlock and Bones.

In this 50th anniversary year of Stonewall, it's important to remember that there were people building bridges before that event. The Weldon sisters worked with organizations like S.I.R. and Glide Memorial. Their inspiration reaches back to the philosophy of earlier struggles for equality and civil rights in the '60, and perhaps to the beliefs of their father, the liberal preacher.


The author would like to thank Mike Mayer of the Woods and Hexagon House website (http://www.thewoods-hexagonhouse.com) for the use of their photo.
Also, visit http://maxineweldon.com/