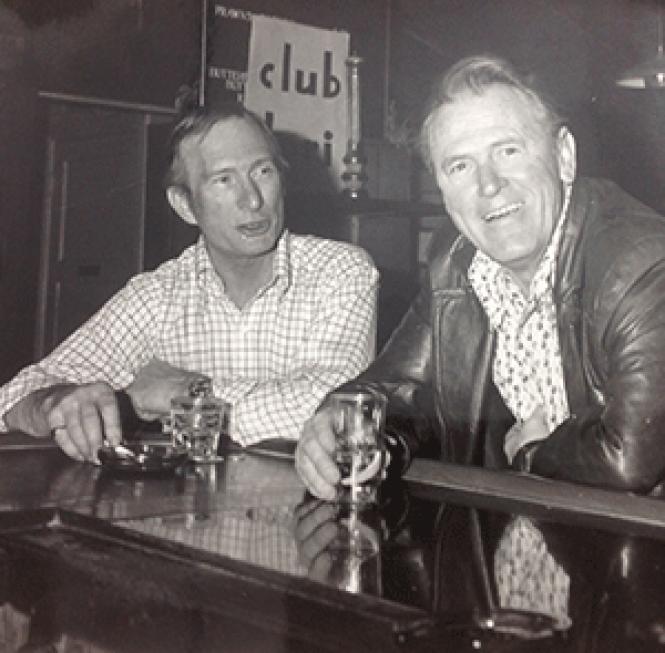 When Doris Jennings ­- the Dori whom the bar was named for - bought the New Bimbos bar, changed its name and opened Club Dori in 1961, it was not a gay bar, according to her son Duffy Jennings. But her initial business partner left town, left her holding the bag, and a large mortgage.

This could have been a disaster for a single woman with two young sons. But as a smart businesswoman, she didn't panic; she started planning.

Jennings says that his mother got her friend (and future Tavern Guild member) George Banda to become a business partner and started brainstorming. A gay bartender named Teddy (nicknamed "Teddy Bear") suggested there was not a bar for discreet businessmen in town. On April 2, 1962 they placed their first ad in the LCE News that said "Club Dori - cocktails dinner sandwiches," and the club took off.

"On the 16th of May, a new spot to many night-lifers made its bow into the limelight. This was Club Dori Western Bar for the Carriage Trade.

Those attending the Roundup at the new club were from all over San Francisco, but more especially from the Presidio, Richmond and the Avenues. However, I don't believe a more cosmopolitan crowd has been seen at an opening here recently."

Club Dori was featured regularly in the Roving Reporter column of the paper. By June it was reported that the club was so good that Dori barely had time to relax. An ad saying, "Dori says Thank You," appeared in the paper in June 1962.

Halloween 1962 saw the first mention of a bus full of drag queens showing up at the bar (note that "H'burners" is short for hair burners, early Sixties San Francisco slang for drag queens):

"There we first ran into the H'Burners bus. Such elegance, such costumery, such impersonation. And Dori's is just the place to set off such a display."

Although the club was off to a rousing start, this was still the early 1960s, and clubs were routinely closed down by the police. I asked Dori's son Duffy Jennings (a former reporter for the San Francisco Chronicle) why he thought the club survived.

"There was little neighborhood resistance," he said. "The club kept quiet and there were no complaints."

Jennings did recall that police would harass the bar patrons, shining flashlights in their eyes and questioning them as they left the bar. In response, his mother got a bigger flashlight and when the police harassed customers, went outside, shined the flashlight in the eyes of the police and said, "Leave my customers alone."

After the initial push in the LCE News the bar became very quiet. No ads were to be found in local publications through the '60s. The next mention of it in the press was in a December 8, 1971 Chronicle article about the city's gay bars.

"Club Dori at 427 Presidio seems to be more like an all-male neighborhood club. Amid the sexual cruising there is banter between old friends. Dori Jennings, who has operated the bar for ten years, said she has had "a marvelous time" with her gay friends.

"'Some young men bring in their mothers to meet me,' she said."

"It was considered a safe bar to go to if one was closeted or not wanting to be seen in a gay bar," he said. "As a neighborhood bar, many guys stopped by after work for a cocktail hour still in their work suits and Montgomery Street wedgies (wingtip dress shoes)."

Sadly, the bar outlived Dori Jennings, who died on March 5, 1981. Following her death, George Banda kept the bar open, and there was a large celebration associated with the 21st anniversary of the opening in November 1983, with prize drawings and contests.

In May 1983, the dining room of the bar closed and it attempted to become a piano bar. The effort was not successful, however and on September 9, 1984 the bar closed after 22 years in business.

Club Dori answers the question regarding the motivation of straight bar owners with gay clientele. It is clear that both Doris Jennings and George Banda had great fun with their customers, and for them it was more than just a business. The long life of the bar shows that their customers appreciated them as well.


The author would like to thank Duffy Jennings for information he provided for this article.