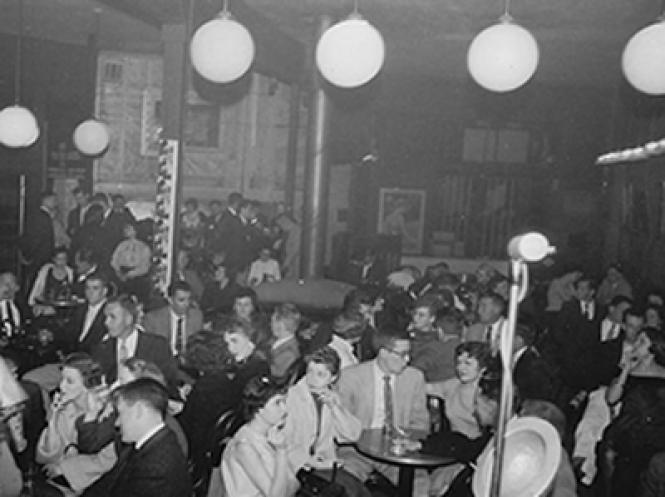 If you know much about the lives of LGBT people in North Beach before Stonewall, you probably know about the world of Allen Ginsberg and the Beats or maybe about the plethora of lesbian bars there. What you probably do not know is that in a few short years North Beach was ground zero for a host of talented musicians, comics and poets not associated with the Beats - and that there was a sizeable participation from people "in the life" in that explosion of talent.

The Purple Onion (140 Columbus Street) was central to that world. I first discovered that there were gay connections to the club while reading Phyllis Diller's autobiography, Like A Lampshade In A Whorehouse.

"Housing 170 seats that were basically director's chairs, the Purple Onion was an intimate joint. To the left, after you walked down a steep flight of sixteen steps from the street, was the bar - a very active gay bar."

Diller clearly was a hit with the men at the bar. In 2011 she told the CBC, "My first audience...was gay people, because they have a great sense of humor."

But the bar wasn't the only gay connection to the club. The person who would get Diller on stage there for the first time on March 7, 1955 was Lloyd Clark.

Clark was a drama coach who initially worked with Diller's inspiration Jorie Remus in 1953 and had worked with Marguerite Johnson in 1954. He worked with her on her calypso music, changed her stage name to Maya Angelou. and a legend was born.

Diller describes Clarek as "a nightclub person who had tremendous connections to the Purple Onion. Suave, dark-haired, pencil-thin and overtly gay, he was there every night with a huge white mound who happened to be his wife."

The emcee and manager of the club was Barry Drew. Diller describes him as "an older gay guy who had been a radio star in Chicago and a member of the famous Barrymore theatrical family. He now owned a tenth of the club and took care of the lights, the sound, the announcements, the greetings at the door and nurturing the new green performers...Barry was a wonderful housemother as well as a gentle person with a great sense of humor."

Drew continued as the club's manager until 1962, when he died under suspicious circumstances.

Diller contributed to the gay atmosphere of the club as well. In 1955 she introduced a folk singer to the club. Reflecting on his first time on stage, Rod McKuen told the Bay Area Reporter in 2002, "When I got out of the army in 1955, Phyllis had blossomed into a comic and was starring at a place called the Purple Onion. She got me an audition, and that's how I began performing."

In August 1955 Phyllis Diller, Maya Angelou and Rod McKuen all appeared on the same bill at the club. Aside from Diller, Angelou and McKuen, there were other artists who made their mark for the first time on the Purple Onion's stage, including the Kingston Trio and the Smothers Brothers (they recorded their first album there). No doubt they were a hit with the bar patrons as well.

The Purple Onion was not the only club in North Beach which was both introducing new talent and entertaining the community. Ann's 440 (440 Broadway) had been a lesbian bar since the 1930s (when it was Mona's 440). And Ann's 440 was also the club which introduced the world to two amazing talents: Lenny Bruce and Johnny Mathis.

Bruce opened at Ann's 440 on April 1, 1958. He was an instant sensation, being quoted in Herb Caen the day after he opened. He ran through June of that year and in many ways it was during this run that he was discovered. Fantasy Records caught his show there and offered him a record contract and Hugh Hefner also saw him there and hired him to perform at the Playboy Club.

But it was really when he returned to San Francisco on October 3, 1961 to the Jazz Workshop (473 Broadway) that his connection to Ann's 440 became fixed in history. In that show he performed a routine named after the club which got him arrested. Bruce took liberties in describing the club (switching gay men for lesbians) and the offending section of the routine, described in Ronald Collins and David Skover's The Trials of Lenny Bruce was as follows:

Lenny: Well, what kind of a show is it, man?

Lenny: No, I don't know, man, sounds like a weird show.

Agent: Well, it's not a show, they're just a bunch of cocksuckers, that's all. It's a damned fag show.

Lenny: Oh. Well, that is a pretty bizarre show. I don't know what I can do in that kind of a show.

Agent: No, it's-we want you to change all that.


After concluding the show, Bruce was arrested and booked for lewd and obscene language for using what the Chronicle called "vernacular of the pool hall in connection with a certain sexual act."

That the paper saw the description as being of an act and not a person gives you an idea as to why Bruce was challenging sensibilities. He was tried the next year and in the court of Clayton W. Horn (the same judge who heard the "Howl" trial) was found not guilty.

Johnny Mathis was playing at a small club across the street from Ann's when he was discovered. Issan Dorsey (then Tommy Dorsey), the former abbot of the Hartford Street Zen Center, reported in his book Street Zen that he and club owner Ann Dee argued for years as to which of them discovered Mathis. Regardless, he met both his manager Helen Noga (of the Black Hawk club) and the head of A&R from Columbia Records at Ann's in 1956 and it launched his career.

The Tin Angel (981 Embarcadero) was run by Peggy Tolk-Watkins, a bohemian who had moved to Sausalito from Black Mountain College with her lover Harriet Sohmers Zwerling.

In 1953 Tolk-Watkins gave Odetta her premiere run from August through December. Fantasy Records recorded Odetta's first record there. Tolk-Watkins was a painter (she had a show at the De Young) and designed album covers for Paul Desmond and Cal Tjader. She appeared on the cover of Lenny Bruce's "Interviews of Our Times."

North Beach LGBT culture was more than the Beats and the bars. It contributed music, poetry and comedy which are remembered to today. It was also a space where bohemians of all stripes and sexualities mixed freely and gave us allies before the word was even used. It deserves to be remembered in all of its complexity.