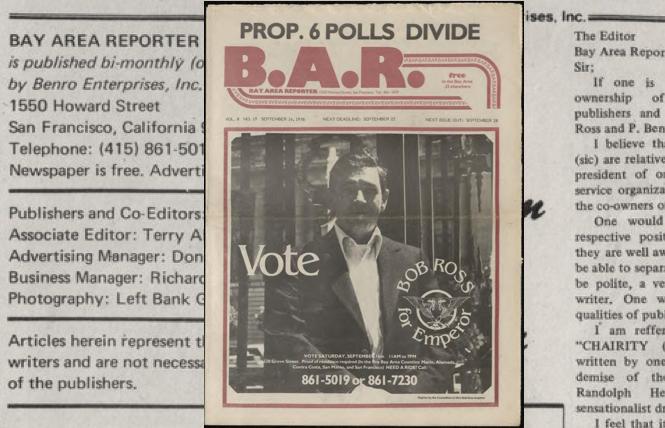 Bob Ross successfully ran for Emperor in 1978. Placing himself on the cover of the B.A.R.'s Sept. 14 issue might have helped.

The Bay Area Reporter first published on April 1, 1971, which was less than two years after the Stonewall Riots. Because of that, and because of what the paper became, it's easy to forget exactly what the paper was when it first started and why it's a uniquely San Francisco institution.

This paper did not grow out of the Gay Liberation movement. Many writers for the paper in the early years, including publishers Paul Bentley and Bob Ross, were people who had been working in gay bars since the 1950s or '60s.

Some had been working in bars when the Tavern Guild was formed in 1962. For the people who had been around when José Sarria ran for the Board of Supervisors in 1961 the cry of "out of the bars and into the streets" was perplexing. The bars were the source of political power in San Francisco for nearly a decade at the time Stonewall erupted in Manhattan — and unlike the East Coast bars, many San Francisco's bars had gay owners.

Perhaps the best case for the centrality of the bars to the paper can be made from the editorial pages of the B.A.R. itself. An editorial from February, 1972 addressed it directly: 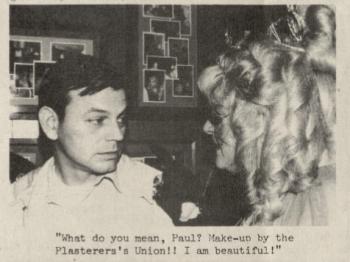 "A Reminder of Just What B.A.R. Is — Probably the biggest complaint registered against the Bay Area Reporter is its consistent bar orientation. But may we direct your attention to the masthead of the paper, its very name — B.A.R. It spells 'bar,' and that is exactly what we're all about, the reporting of Bay Area bar news. That was its original concept and our current purpose. True, we can do more — and we're trying...trying to incorporate news of the Gay versus the Establishment; news of non-bar Gay happenings. These are areas in which we have fallen short, and in which we are constantly trying to improve. But we are distributed through the bars, advertiser-supported by the bars, and publishing what's happening in various bars — so you can make an informed choice when you wish to go 'bar-ing' — will always remain our prime purpose." 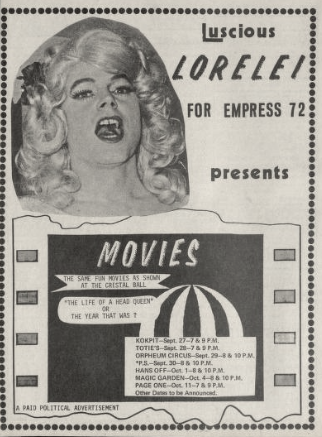 Paul Bentley as Lorilei in a 1972 B.A.R. ad for promotional campaign movie nights.

Driving, Bentley
To understand why the B.A.R. was primarily concerned with bar culture, it helps to know who was writing for the paper in the first few years. One person who is essential to understanding the early B.A.R. is the co-publisher Paul Bentley.

Bentley (aka the Luscious Lorelei) was a driving force in the early history of the paper. In the first few years of the paper he wrote several columns, including the first leather column "Czarina de Miracle Mile", after the title granted to him by the Imperial Council in 1968 (Bentley was the first Czarina). Aside from writing under his title, Bentley occasionally wrote under Lorelei and once or twice under his given name.

Before coming to San Francisco from Los Angeles in 1967 he already had operated two leather bars, the Explorer on Melrose Avenue and the Hayloft in the San Fernando Valley. He was operating the Ramrod (1225 Folsom St.) when the B.A.R. was first published and in the paper's first year he campaigned to become Empress VII (a contest he lost to Empress Jonni).

Bentley was active in the Tavern Guild and the Society for Individual Rights, where he taught tap dancing. Bentley went on to open the N'Touch (1548 Polk) in 1974. Bentley remained a co-publisher through July 1974 and published his last article in the B.A.R. in April 1974. 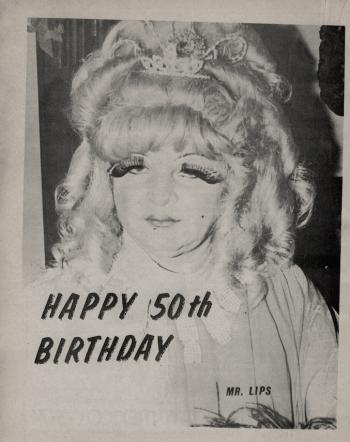 The B.A.R. was extremely festive in the Bentley era, with Sweet Lips (Dick Walters of the Kokpit) writing his gossip column from the very first issue, El Scorpio spinning his astrological predictions, the Empress Crystal writing the first edition of the Imperial Bullsheet and Cecil Knockerworst Weatherbee (Danny Petreyko) providing Loco Weather Forecast, a humor column.

Other columnists from this era included Don Cavallo of the Fickle Fox writing restaurant reviews as "Aunt Mildred's Gourmet Capers," Lou Greene writing another gossip column This-a & That-a, and Bob Ross writing the bar review column "An Evening Out" under the pseudonym "Connie" (later revealed by Lips to be short for "Connie Cookout").

Having a publisher who was running for Empress had some rather hilarious consequences that first year, including an issue in which all of the candidates appeared on the cover (gasp!) out of drag! 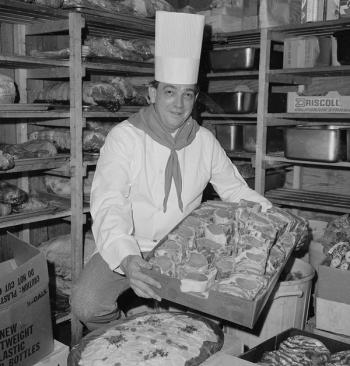 Hi, Bob
Bob Ross' history in San Francisco bars also informs what the B.A.R. was and what it would become. Ross first visited San Francisco in 1953, when he was in the navy. He was so impressed that he returned in 1956 and almost immediately became involved with the gay bar world.

In an oral history conducted by the GLBT Historical Society, Ross mentioned that he had money in the Nob Hill Club (2223 Polk St), a bar owned by Keno Clark that had its license revoked for being "a hangout for sexual perverts" (as the SF Chronicle called it at the time) in August, 1959.

Ross was close friends with "Uncle" Billy Morrell, who was involved in the "Gayola" police payoff scandal of 1960 (Ross wrote the obituary for Morrell in the June 15, 1971 B.A.R.).

Before successfully running for Emperor in 1979, Ross was chef at the 524 Club (524 Union) from at least 1965, and through that restaurant became involved with S.I.R., the Tavern Guild and the Beaux Arts Ball. In 1972 Ross was the Tavern Guild's president and also wrote for the S.I.R. magazine Vector. When the B.A.R. first published, Ross was a chef at the PS (1121 Polk Street). 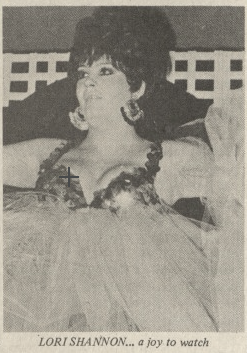 McLean performed as Lori Shannon at Finocchio's (as well as other local venues) and is perhaps best remembered for his recurring role as Beverly LaSalle on All In The Family.

Hernandez's column covered much of the same territory that Bentley did in his Czarina de Miracle Mile column and the Czarina's column went into exile.

Marcus' column proved to be very popular; when elections began for the first Emperor in 1972, he ran and won (he was later followed onto the court by Bob Ross, who became Emperor VII in 1978). 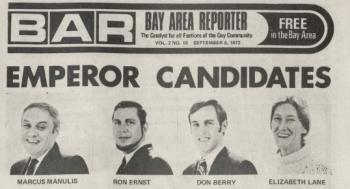 Marcus Hernandez among other Emperor candidates, in the Sept. 6, 1972 B.A.R.

With multiple gossip columnists, there was only so much gossip to go around, even in San Francisco. Along with the increasing pace of LGBT news, this heralded changes to the paper.

In the next year, the paper would deal with the election of Richard Nixon, increased vice squad raids, the burning of the S.I.R. center and increasing violence against the community. The notion that the paper could simply be one that dealt with bar news seemed somehow quaint as the pace of the 1970s picked up. Tension between community news and news from the world at large is a struggle that would continue throughout the decade and beyond, but it is that tension that made the paper grow and last for fifty years.