When Marlene played the Bay: Dietrich's Concerts were a sensation 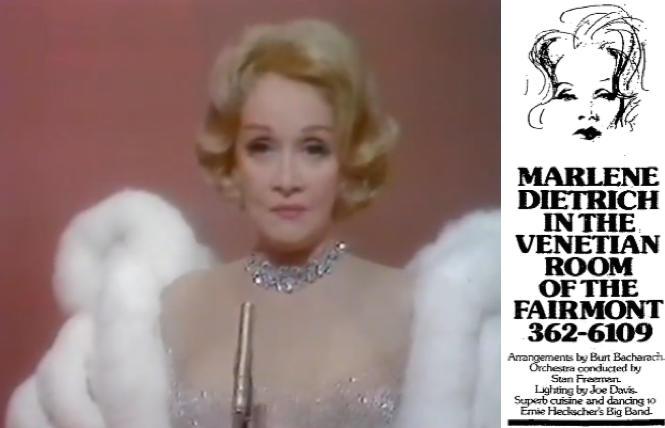 Marlene Dietrich blurred all boundaries and checked all of the boxes. In Josef von Sternberg's Morocco (1930) she appeared onstage in a top hat and tails; during a performance she asks a woman for the flower in her hair, kisses her, and throws the flower to Gary Cooper. She was nominated for an Academy Award in the film in which she cross-dressed and implied bisexuality; not a bad start for her first film in America.

She had, of course, been singing since the 1920s, her first recording being "Wenn die beste Freundin" (1928), a duet with lesbian undertones sang with actress Margo Lion in a Weimar musical review. Her films featured songs, from "Falling In Love Again" (from The Blue Angel) to "See What The Boys In The Backroom Will Have" (from Destry Rides Again). But were her concerts events for the LGBT community and were her fans aware that she was a member of the community?

On September 12, 1960 she was front-page news in the San Francisco Chronicle: "Only for Marlene: They Gather and Gasp for Dietrich." But nothing suggested ambiguous sexuality in the coverage — except perhaps the suggestion by June Ericson, a singer at the Purple Onion, that if there had been a horse-drawn carriage, she would let the horses go and pull Dietrich herself.

However, in its review "Marlene Is All You Expected," the Chronicle reviewer suggested Dietrich had a look of "amused depravity" and danced in a white tie and tails. 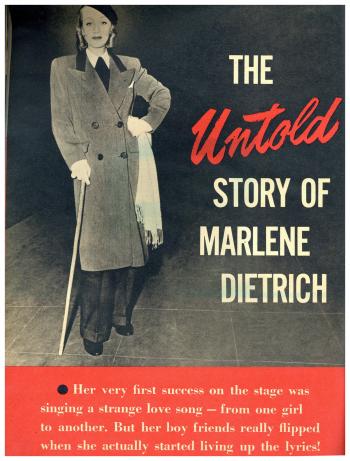 LGBT sources help to understand how Dietrich was perceived before Stonewall. One author who mentioned her was Barbara Grier, writing as Gene Damon in the Daughters of Bilitis magazine The Ladder. In her July 1967 "Lesbiana" book review column of Bikini Beach by Geoffrey Bocca, Grier referred to nightclub owner Mickey Provost as "The former lover of Marlene Dietrich ... also one of the most beautiful women in the world."

Grier reviewed Mercedes de Acosta's autobiography Here Lies The Heart (which details Acosta's romance with Dietrich) in an April 1961 article. Dietrich and de Acosta get mentioned as women who wear pants in Grier's review of the fashion book 100 Years of the American Female in the June-July 1969 issue of The Ladder.

Coverage of Dietrich's concerts is mostly lacking in the pre-Stonewall press. I only found one mention in the publication Blue Sheets from Vancouver B.C., in its calendar listings for concerts in Sept. 1964. Most gay men's magazines before Stonewall mention Dietrich as a film icon or an inspiration for female impersonations.

Dietrich never commented on the article and in Marlene Dietrich: The Life by Dietrich's daughter Maria Riva, it is not mentioned. It seems unlikely that it would be overlooked if it upset her. (See JD Doyle's scans of Confidential magazine.)

Confidential's article seemed to have had no impact on her film or her concert career. It was widely read, however, according to Confidential Confidential: The Inside Story of Hollywood's Notorious Scandal Magazine: "Confidential's July 1955 issue, featuring "The Untold Story of Marlene Dietrich," sold over 3,700,000 copies on newsstands, history's biggest sale of any magazine issue."

Riva had her own connections to San Francisco's gay community. In 1944, while Dietrich was in Europe entertaining the troops, Riva had a "lost weekend" in San Francisco: 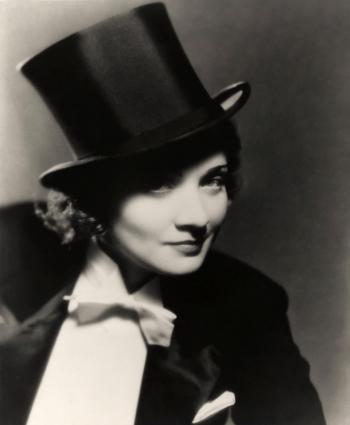 "I remember a limbo time in San Francisco. How did I get there and why? I spent my time in bars and transvestite nightclubs. Earned booze money doing odd jobs. A trained-by-Dietrich dresser can function very nicely as handmaiden to a female impersonator of Sophie Tucker.

"His name was Walter, his fame quite legitimate and deserved. He kept his many sumptuous evening gowns, like museum pieces, in ventilated cedar-lined closets, his huge collection of accessories in catalogued archival boxes, let me bunk down in his boudoir, fed me, worried about me, protected me by his patronage, and very probably kept me from being hurt."

The person she is describing sounds very much like Finocchio's Walter Hart, known as the "Male Sophie Tucker."

One early connection between Dietrich and the gay community was documented by author Thom Nickels, who interviewed John Banks, a bartender at La Mystique, a former Montreal gay bar. Banks met Dietrich after one of her concerts in 1960 and became her personal assistant for twelve years. In a subsequent article in The Montreal Gazette, Banks elaborated on the atmosphere in Montreal when Dietrich's 1960 concert was announced.

"The announcement [that she was coming to Montreal] unleashed a frenzy of excitement that only a concert combining Céline Dion and Madonna might match today," recalls Banks, now 67. "The night itself — well, it was Halloween and there were more Dietrichs to be seen on the streets of Montreal [in the city's then-downtown Gay Village] than men in trousers, though quite a few of the Dietrich impersonators were wearing trousers too!"

Regarding Dietrich's opinion of drag, he told the paper, "Marlene adored drag. At every show, there would be drag queens dressed as Marlene. And she liked meeting them backstage to see what they were wearing."

Connections between Dietrich's performances and the LGBT community after Stonewall are easier to document. In the Feb. 21, 1973, Bay Area Reporter Empress Maxine noted in her column, The Empress Connection, that The Ramrod was showing the television special I Wish You Love (aka An Evening With Marlene Dietrich), initially broadcast on CBS on Jan. 13, 1973.

Angelic fans
An interesting pilgrimage occurred for the March 1973 performances at the Circle Star Theater. Around ten members of the Angels of Light went to see her perform. I interviewed Beaver Bauer about the event and she explained the interest in Dietrich:

"We idolized her because of how she lived her life; her work against the Nazis and her bisexuality and her freakiness. We just loved her. We had this book called Four Fabulous Faces. It was Swanson, Crawford, Garbo and Dietrich. It was a gigantic coffee table book with fantastic photographs, mostly of their faces, and we would look at it all the time for makeup tips especially and for lighting."

Bauer went on to tell me about meeting her at the theater. 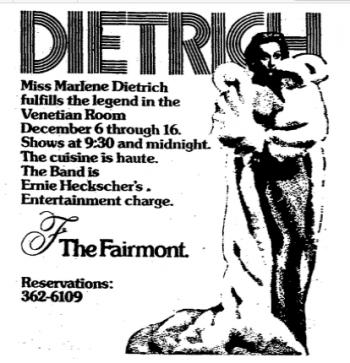 "Everyone got dressed up in gowns and dresses and crazy things. It was like a dream come true to us. We waited outside the stage door inside and rushed right up to her and told her how we worshiped her. I had my son with me, Sean. She was very excited to see a baby and she took him, held him in her arms and kissed him. I felt like this was a huge blessing on my son, to be kissed by Marlene Dietrich."

Greg Cruikshank was also with the Angels for the trip to see Dietrich at Circle Star.

"She came out to the lobby and greeted us after the show," he recalled. "That was when I got to kiss her cheek and she said she agreed with me that Mr. Von Sternberg was a great director. I still remember the softness of her skin."

Michael C. Anstadt, a bartender at the Red Lantern Saloon (188 Golden Gate) saw Dietrich at the Fairmont Hotel on April 6, 1975.

"It was a dinner show. My friend Rexanne [a bartender at the Gangway and the Kokpit] took me and Tenderloin Tessie [a bartender at the 222 Club] to see Miss Dietrich as birthday gifts. He was a big fan and did Marlene in drag and sang with his own voice. I remember him telling me she wore a rubber suit under her bugle-beaded dress and she wore this fabulous full-length white fur coat. She sang all her standards. I was only 24 at the time and thought I was in heaven. She had a fabulous talking voice."

"He told me the place was packed," said Abramson. "At the opening of her show, she simply let a bit of a feather boa peek out from one side of the proscenium curtain and the crowd cheered and screamed for five minutes before she gave them any more of a sight of her greatness. He loved the show and raved about it!"

The 1975 concerts were Dietrich's last in San Francisco. On September 29, 1975 she fell from a stage in Sydney, which ended her live performances. There were subsequent film roles, with David Bowie in Just A Gigolo and Maximilian Schell's documentary Marlene.

But the magic that she brought to the stage was gone. She lived to see the spirit of Weimar Germany's sexual freedom be rekindled in America in the 1960ss and her towering place in our history remains. Marlene Dietrich died on May 6, 1992 at age 90.

Who was Marlene Dietrich?