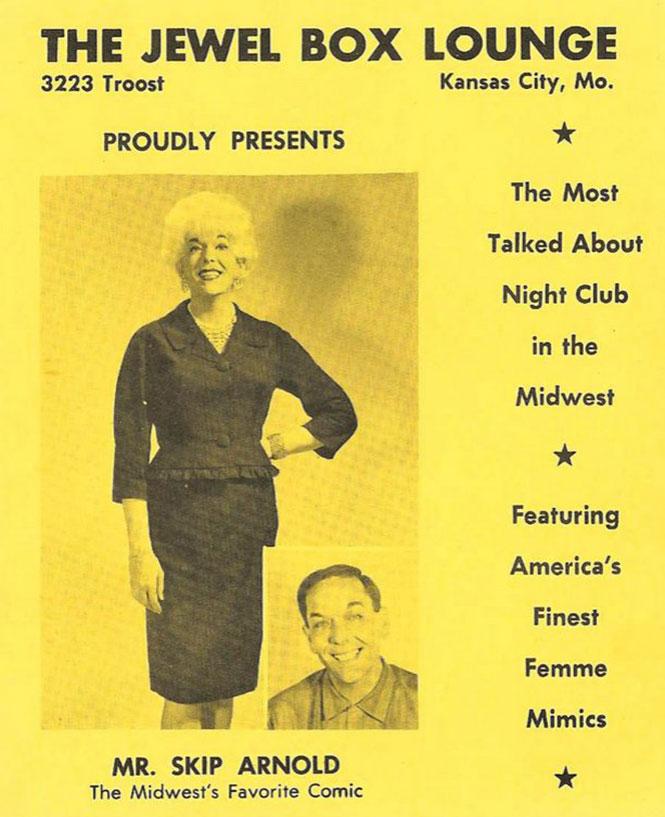 The era before Stonewall is shrouded in the mists of history as a time when many LGBT people were closeted and frightened, and the clubs could be scary places. How refreshing, then, to read about an anthropologist who studied drag culture in the mid-1960s in Chicago, Kansas City and New York and how a female impersonator who got his start in San Francisco's clubs was central to that study.

Skip Arnold (given name Ralph, which he never used) was born in New Mexico in 1922 and eventually moved with his mother to Los Angeles. He served on the USS Saratoga in World War II. By April 1956 Arnold lived in San Francisco and performed at Ann's 440 (440 Broadway) with club owner Ann Dee and Finocchio's regular Carroll Davis.

Arnold wrote and directed pieces which included performers such as Charles Pierce and Joan Paulsen (Pat Paulsen's wife). By February 1958 he was working as a bartender at the Opera Club Lounge (621 Gough), owned by Tavern Guild president Bill Plath. While there he produced Ye Olde Auntie Mame, a takeoff on Auntie Mame. 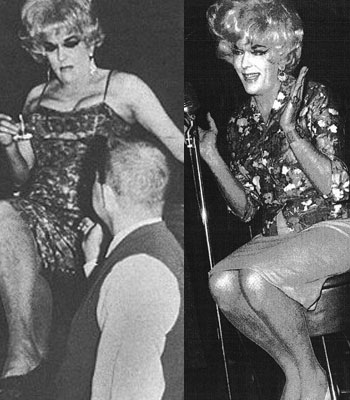 In June 1959 the San Francisco Mattachine Newsletter ran an article stating Arnold opened in Kansas City at the Colony Club (3325 Troost). From Kansas City, Arnold moved to Chicago, as Chicago Whispers: A History of LGBT Chicago Before Stonewall notes:

"In the summer of 1965 [Nick] Dallesandro hired Skip Arnold, a drag comedian who had recently relocated from Kansas City, where he worked in a straight drag club. Arnold caused a stir in Chicago with his hilarious songs and comedy routines."

"When I first saw Skip Arnold perform in a Chicago gay bar in 1965, I sensed he would change my life. Skip, who worked live, using his own voice and singing with a small band, appeared to be a huge woman figure in makeup, gown, wig and high heels. The audience of gay men laughed, shouted, clapped at Skip's smutty, witty political patter. It was interactive, live performance ... I had fleetingly seen drag queens and even lesbians dressed like men who worked as waiters at Club 82 in New York's East Village, where my former girlfriend Nannette had worked as a dancer, that summer of 1959."

While searching for a dissertation subject, Newton considered working in Kenya or Fiji, and writing a course paper about Chicago drag queens. Her mentor David Schneider, Chair of the Anthropology department, encouraged her to instead make drag queens the subject of her doctoral dissertation. Arnold was also on board. Between shows at The Annex she had talked with him and he told her, "I majored in anthropology in college...Love the subject."

From 1965 to 1967 Newton did field work in clubs In Chicago, Kansas City, New York and San Francisco. Her dissertation was published by Prentice-Hall as Mother Camp: Female Impersonators in America in 1972. The book gives a complex portrait of drag in the mid-Sixties.

"Role Models" is a chapter where Newton distinguishes between "actress" performers who idolize female entertainers, drag queens concerned with the appearance of gender transformation, and camp performers. Both the drag queen and the camp sections go into a detailed analysis of what drag and camp meant at that time.

Lynne Carter's segment describes his impersonations of Phyllis Diller, Mae West, Bette Davis and his signature Pearl Bailey impersonation. There is a marked distinction between audience interactions during the performances, because of the types of bars: Arnold was in a gay bar and Carter a tourist bar. 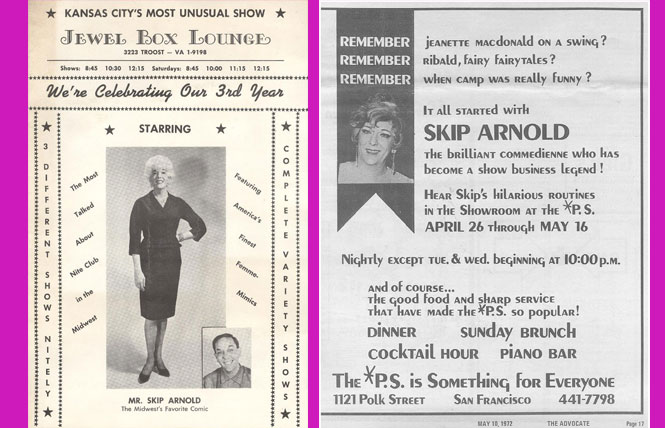 In "The Fast Fuck and the Quick Buck" chapter, Newton details differences between these bars. For Arnold's performance the sense of community is apparent, whereas in a tourist clubs Newton notes "sociability is not expected or encouraged." The difference between these audiences could be stark, as the book elaborates:

"In Chicago, one very popular performer came down off the stage as part of his act and held out his hands to the gay audience sitting along the bar. The people in the audience virtually climbed all over each other to touch him. In Kansas City, I saw the same performer come down into the straight audience, and the people at the tables as he walked among them visibly shrank back. At one point he accidentally touched a seated woman, and she actually screamed out, 'Get it away from me.'"

The chapter also vividly paints working conditions in the bars:

"Along the back wall were two windows that looked out on a back alley. One of these was broken and freely admitted icy blasts during the winter. Finally one performer put some cardboard over the break. The cold air was offset by the pipes in the heating system, which ran up through the backstage. Performers would often burn themselves on the naked pipes."
Regarding writing about labor conditions, Newton told me, "I think because of my left wing upbringing, all my work has stressed the economic conditions of the subject(s)."

In the "Field Methods" appendix she notes in a footnote when she knew she was fully accepted by the performers:
"In the last week of the first trip one of the performers [Skip Arnold] offered me what I considered to be a full 'courtesy stigma' ... When asked by a visiting impersonator who I was, he replied casually, 'Oh, she's my husband.'"

This prompted me to ask Newton if Arnold had ever mentioned his 1956 marriage to lesbian performer Pat Bond (mentioned in Charles Pierce's book From Drags to Riches: The Untold Story of Charles Pierce and confirmed in genealogical databases).

She responded, "No, I had no idea about this fascinating piece of history. He was clearly okay with lesbians though." 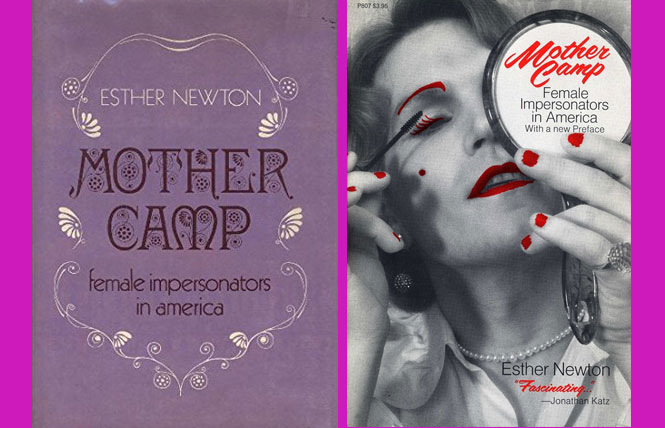 Anthropology of drag
Newton changed the names of the bars and some performers in her book. Chicago Whispers notes the Annex is called the Shed in Mother Camp and the Chesterfield is called Marlboro. At The Annex, Arnold had a prolonged conversation with another performer from the Chesterfield, called "Ronnie" in the book. Newton confirmed this was Roby Landers, a well-known Chicago performer of the era. Newton explained:

"When I was writing, everything was so hush-hush and scary, I wanted to protect the lives these men were living as much as possible, so I changed all names."

Arnold worked a joke mentioning the Mattachine Society into his Annex routine quoted in Mother Camp. Arnold is also mentioned in a Chicago Mattachine newsletter as introducing a talk on VD in 1965. I asked Newton about this and she told me:

"He was the only performer at that time who mentioned Mattachine and gay oppression in his act."

Mother Camp was released in 1972 and met mostly with silence. There were few reviews in the gay press, but a patronizing review in Canada's The Body Politic suggested Newton should apologize for the book since Gay Liberation had changed everything since Newton's study. It was ignored in the academic press. 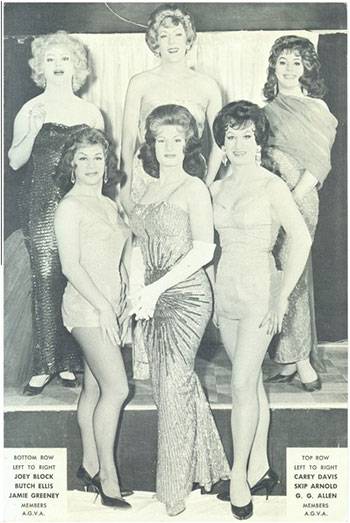 Skip Arnold as part of the Jewel Box line-up

I asked Newton about the publisher's support of the book and the differences from Humphrey's book, and she responded:
"Prentice-Hall did nothing whatsoever to support the book. I am sure they only published it because my mentor David Schneider wanted to put it in the series he was editing. Possibly Laud was able to push his book himself. I was clueless on that score."

In 1979 Mother Camp was re-released by the University of Chicago Press with an eye-catching cover. It has remained in print ever since. This was the version of the book I first was aware of when working in a bookstore in the Midwest that year.

I was not alone. In My Butch Career, Newton discusses a meeting of the American Anthropological Association in 1981, where she met several lesbian and gay colleagues familiar with Mother Camp. Another person impressed by her work was anthropologist Gayle Rubin.

Discussions with Rubin concerning S/M and butch/femme were enlightening to Newton regarding feminist thinking about drag dominant at the time, as she relates in My Butch Career:

"You were supposed to think that drag queens were sexist and degrading imitations of women, which I always knew wasn't true," said Rubin. "Not that drag queens couldn't be sexist, but so could politicians and taxi drivers. Female impersonation had to be seen in the context of the queer community, where it had its roots and fabulous foliage. The whole idea of the correct political line was dangerous."

Mother Camp is just the beginning of Esther Newton's amazing career. For a more complete view of her life in the '60s and '70s, when she knew both Jill Johnston (author of Lesbian Nation) and Monique Wittig (author of The Lesbian Body, among many other works) read her autobiography My Butch Career.

Aside from her career as a professor at SUNY Purchase and University of Michigan, she published Cherry Grove, Fire Island: Sixty Years in America's First Gay and Lesbian Town in 1993 and Margaret Mead Made Me Gay: Personal Essays, Public Ideas in 2000.

A documentary on her life, entitled Agility, is in its final edit (www.esther-newton.com).

Skip Arnold continued to perform throughout the U.S. and Canada, returning to San Francisco for an extended run at the *PS in 1972. He retired to Florida and died in 2005. Among his possessions was a well-worn copy of Mother Camp.

Mother Camp has been reclaimed by the world of Anthropology. It deserves to be recognized by LGBT readers as a non-fiction classic which transports us much like Christopher Isherwood's Christopher and his Kind. It tells the story of a distant time when brave people, drag queens and anthropologists alike, preserved their story for their LGBT progeny.