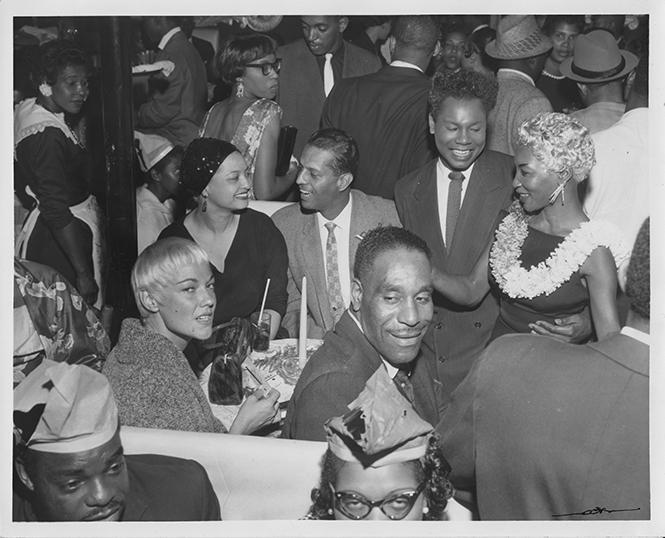 Leola King (seated in black hat) with Lottie "The Body" Claibourne (standing with lei) and unknown female impersonator referred to by Frank Jackson at Harlem of the West website (with arm around Lottie) at the Texas Playhouse on September 10, 1958. credit: Wesley Johnson III Collection

"We used to go to jazz clubs after 2:00 and drink liquor out of coffee cups. Relations between blacks and whites were excellent. They were glad to have us out in the Fillmore, out at the jazz clubs. We were treated like queens, and I don't mean in that sense [laughs]. I mean it was a whole different world then."

Teasing the LGBT history of the Fillmore district out of the existing records can be a tricky proposition. I came to this conclusion after reading Gay by the Bay: a History of Queer Culture in the San Francisco Bay Area by Susan Stryker and Jim Van Buskirk, which says (on page 24), "The first black-owned and oriented gay bar in the city, the Big Glass on Fillmore, did not open until 1964." This has subsequently been quoted in several other books and the San Francisco Chronicle. 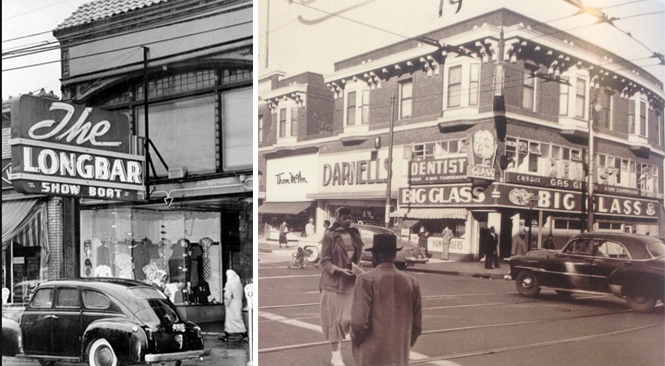 The Big Glass is listed in Polk directories as opening in 1949 at 1600 Fillmore, where it remained until 1959, when redevelopment forced a move to 1801 Fillmore. The owners from 1949 until it closed in 1968 were listed as Arthur and Ruth Rosinsky. A genealogical database shows that Arthur Rosinsky was Jewish, born in Russia and emigrated as a child in 1922, so the owners didn't appear to be either African-American or gay.

I contacted the authors of Gay by the Bay. As closely as Prof. Stryker could recall, the reference originated in conversations with founding GLBT Historical Society members Willie Walker and Eric Garber. The book was published 25 years ago and time had faded the memory.

There was, however, a reference to the Big Glass in a contest listing closed gay bars for the 21st anniversary of Club Dori, published in the SF Sentinel on Dec. 8, 1983. 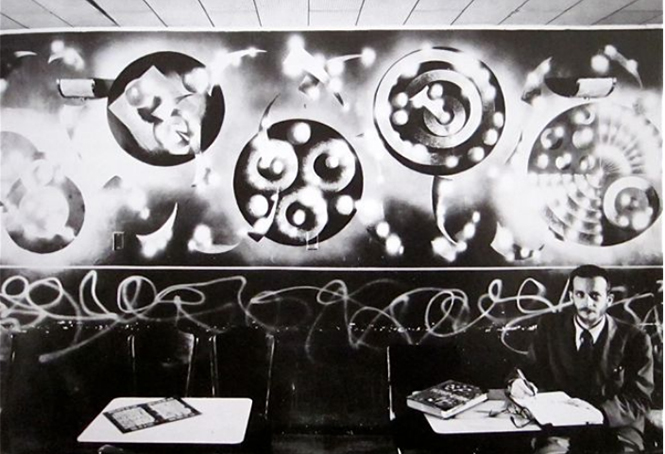 The historian Damon Scott mentioned the bar in his historical context statement Sexing the City: The Development of Sexual Identity—Based Subcultures in San Francisco, 1933—1979.

I contacted him concerning this mention. He said he has come to understand the Big Glass was not black-owned. Regarding gay patronage, however, he pointed me toward an interesting note in materials from José Sarria's supervisorial campaign, housed with Sarria's papers at the GLBT Historical Society's archives.

"Jose,
Why don't you go up to the Big Glass @ Sutter & Fillmore Sts. Its (sic) predomantly (sic) gay. You will have to talk to the people who own the place Ruth & Art. I'm awfully sorry that I don't have any wait (sic) there or I would intercede for you. At least if they permit you to leave a poster thats (sic) something! I'm telling everyone I know.
Hortense"

An article on the raid on Kellys Club, San Francisco Chronicle. September 22, 1956.

Not strictly gay
Scott told me that there was, however, no mention of the Big Glass in a list of campaign sites also in the Sarria papers. He also pointed me toward the GLBT Historical Society's oral histories, which discuss gay participation in the Fillmore's nightlife.

One such oral history was with Larry Howell by Martin Meeker and, referring to the Gourmet Breakfast Club (1650 Post) said:

"The Gourmet over on Fillmore Street, I used to dance there after hours in the early '50s. It was upstairs...the gays just flocked there at two in the morning... There was gay dancing... a lot of gay women went there too. It was fun!...It was on Post Street right off of Fillmore and nearby was another well-known place called the Plantation where jazz musicians used to play. Gays went there somewhat. It wasn't strictly gay."

The Gourmet Breakfast Club was closed by the State Board of Equalization after a raid for serving liquor after hours on March 29, 1953.

Another oral history with Gene Carles, recorded by Jim Duggins, discusses jazz performances in the Fillmore:

Gene Carles: There was a place called the Long Bar...there was always a few... a smattering of gay people in there. And then eventually they got this guy ... he was a black female impersonator."

"There was ... I can't remember the name of that bar, it was right on Fillmore and Billie Holiday appeared there several times in the '40s and we went to see her. it was a jazz bar. But, there was a huge gay crowd at our table and she knew it and it was perfectly acceptable."

Aside from the Gourmet Breakfast Club, there was also a predominately lesbian club in the neighborhood, Kelly's Club (also known as the Alamo Club, at 800 Fulton). It was raided and closed on September 22, 1956. In the SF Chronicle article about the raid, it says police reported: "They saw men dancing with men and women dancing with women." Thirty six women were arrested for "frequenting a house of ill repute" and only four plead not guilty.

The raid came just as the Daughters of Bilitis were beginning to publish The Ladder, and Del Martin wrote about the arrests and advocated "Don't Plead Guilty" in an article regarding what to do in case of arrest. The DOB also had an attorney speak to the organization on the topic on October 23, 1956.

Harlem of the West
A wonderful source for learning about the nightlife in the Fillmore during the 1950s and '60s is the book Harlem of the West - The San Francisco Fillmore Jazz Era by Elizabeth Pepin Silva and Lewis Watts, which has just entered its fourth edition.

The book has sumptuous photographs of clubs like Leola King's Blue Mirror and the Long Bar. It covers the era of the Japanese internment camps and the rise of the African-American neighborhood. There are photographs of Little Richard with Jimi Hendrix at the Fillmore in October 1964 and the murals created by gay artist Harry Smith at Jimbo's Bop City.

At the website associated with the book (www.harlemofthewestsf.com) there are interviews of interest as well. In one of the interviews musician Frank Jackson discusses a photo at the Texas Playhouse with Elizabeth Pepin Silva:

The Fillmore of the jazz era was an incredible place — a place that was ripped from the city by redevelopment. Its history is intersectional and as such is a history of African-American, Japanese, Jewish —and yes, LGBT— San Francisco.

Many of the bars in the Fillmore may not have been gay bars as we currently understand it, but there was definitely a LGBT presence in the neighborhood. As February is not only Black History Month, but the month in which we celebrate Valentine's Day, we can look back at this era with love and remember how the many groups in the neighborhood treated one another with kindness and mutual respect.

The author would like to thank Elizabeth Pepin Silva, Lewis Watts, Damon Scott and Peter Stein.

The authors of Harlem of the West will be at the Bayview Opera House on Feb. 29 at 6pm and Kaleidoscope Coffee in Point Richmond on March 27 at 7pm. Details at: https://heydaybooks.com/event/