Taking the Detour: Fond remembrances of a sexy cruise bar 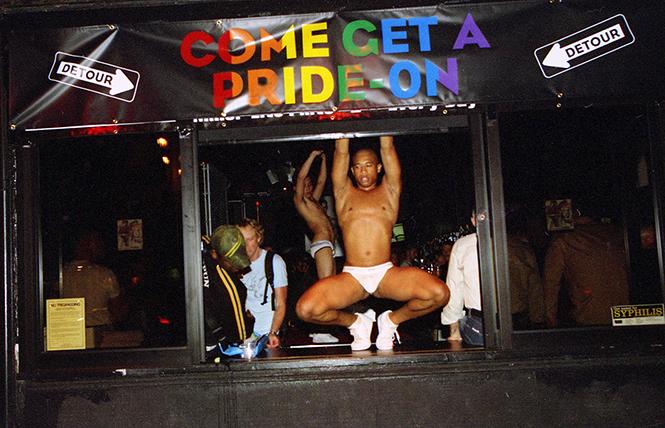 Dancers perform in the window of the Detour Bar in June 2005, the bar's last year. photo: Rick Gerharter

Faithful readers of the Bay Area Reporter noticed that an article about the video game bar Brewcade changing its name to the Detour got some pushback from our readers.

Karin Lee Jaffie: "If there's no chain-link fence and the floor ain't sticky, it's not the Detour. Lolz."

Matt Welch: "The Detour was such a big part of leather and kink culture in the Castro. It feels like bastardization to see the name now applied to pinball machines."

Matthew Ogden: "Blasphemy to use the name of Detour for a pinball bar. The Disneyland effect in the Castro. The original Detour was a smoking hot cruise bar! And, BTW, I don't know any gay men who play pinball...."

Reactions like these reveal that the Detour still (some fourteen years after its closing) evokes strong memories for long-term area residents who were patrons of the bar. To understand why the memory evokes such feelings, it's a good idea to look at the history of the bar. 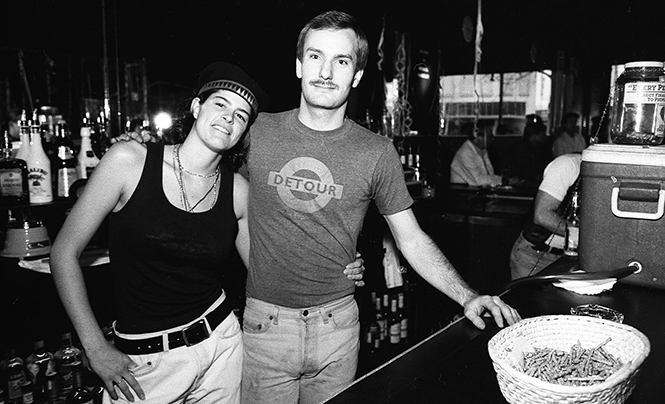 Nikki Rivera and Ron Turner were bartenders at the Detour Bar in 1989. photo: Rick Gerharter

Original Detour
The Detour, located at 2348 Market Street (in the same space as Beaux, which has the address of 2344 Market) is in the location of the earliest gay bar in the Castro, the Missouri Mule, which opened in 1963. Between the Missouri Mule and the Detour, the spot housed Hombre, Chops and Patsy's (the last of which had a Country & Western atmosphere).

The Detour, however, was something of a departure. Painted black, with a chain link fence wall inside, the club made quite the splash. Another feature includes a red laser which, when seen at a certain angle, displayed text, often raunchy and suggestive.

"I didn't get an invitation to the grand opening of the Detour on Upper Market, but wags all over town say it was a lascivious affair with lots of hunky leather men on hand for the premiere and of late the place is jam-packed. That black paint and storm fence syndrome will do it every time."

From the very beginning the bar had something of an outlaw feel, and a hyper-charged sexual environment that extended all the way to the urinal troughs with conveniently tilted mirrors for maximum cruising. 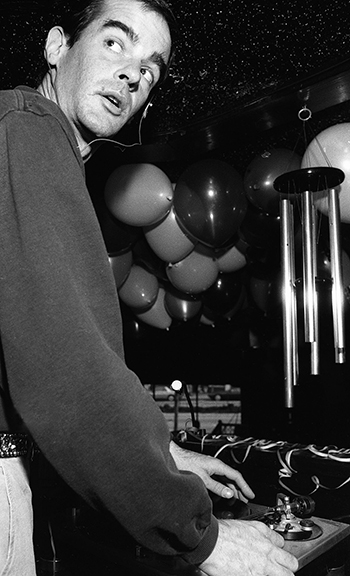 "Graffito seen in the tearoom at the new leathery Detour on Upper Market: "I want someone to piss in my mouth," under which someone else scrawled: "I wouldn't piss in your mouth if your teeth were on fire.""

The sexual atmosphere was not just for show, either. Karl Stewart recounted in his "My Knights In Leather" column in the B.A.R. on Dec. 23, 1982:

"The Detour has attracted a hot crowd of Castro toughs and leathermen alike. What a stunning group! It's funny, maybe because no one knows me there, but I've never left the Detour without a trick — and the pick of the Detour are always gorgeous."

Still, the designation of the Detour as a leather bar was somewhat contested, even at the beginning. In a Nov. 14, 1982 B.A.R. article, "Leather Bars in the Castro" Mike Hippler interviewed the bar's manager, Gary Bernier, who said, "We didn't set out to be a leather bar. That's not our main objective. It's not fair to define it in any one way. We're on neutral ground here in the Castro and don't appeal to any one segment of the population. Sometimes people get off the bus in a three-piece suit and feel uncomfortable in a leather bar. We just want to appeal to nice guys."

Sam Labelle, who was musical director for the Detour from 1985 to 2004, concurred. "We didn't really consider The Detour as a leather bar. We thought of The Detour as a man's bar."

That descriptor leads to the news report about an alleged discriminatory door policy during the 1980s. A January 12, 1984 B.A.R. article tells of protests by the Toklas Democratic Club and other local organizations after women reported being "triple-carded," asked to provide three forms of identification, unlike male patrons.

Dan Denman, The Detour's then-owner, countered that the women demanded to be admitted and were disruptive, saying, "We do not discriminate against women. Detour is a man's bar and has a large majority of male customers. They would feel more comfortable in another environment."

The door policy changed, and women were more easily admitted, including staff bartender Nikki Rivera in the late 1980s. It remained a mostly-male bar until the 1990s, when it became more 'queer,' with drag and gender-fluid patrons, like Bond and artist Jerome Caja. 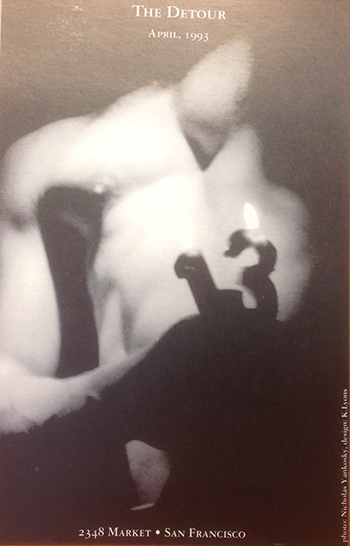 Whether leather
Whether or not the Detour was a leather bar, it was most certainly a highly-charged sexual environment. When asking about the bar, friends mentioned the gogo boys who performed there, and many B.A.R. personal ads refer to meetings at the bar.

Another distinguishing characteristic of the bar was its music, often dark, electronic and interesting. Greg Cruikshank, who was a DJ there, said, "There was complete freedom for the DJs, and that energy fed on itself."

Asked about the style of music at the bar, Sam Labelle said, "The DJs were alternative/rock. We played what we liked. Most of all the New Wave artists were presented; Depeche Mode, Cure, Nine Inch Nails, Siouxsie, Marianne Faithful."

The Detour was used as a set for two gay films, the Marc Huestis & Lawrence Helman-produced documentary Sex Is... (1993) and the 1995 narrative film Frisk, loosely based on the Dennis Cooper novel.

There were also live performances at the bar, including appearances by Lypsinka and Justin Vivian Bond. Historian and GLBT Historical Society founding member Gerard Koskovich recalled, "I saw a Justin Vivian Bond performance there that included Bond prancing down the bar and sending a cocktail or two flying."

Labelle concurred, "Justin was a friend of The Detour (at the bar just about every night). Justin's performances were very memorable." 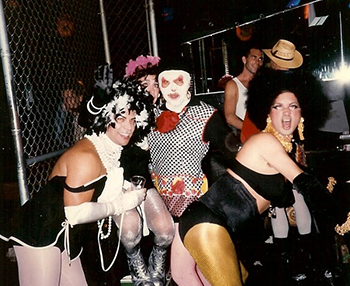 A drag Halloween gaggle of friends in the 1990s. photo: Eddie Valentine

AIDS had a huge impact on the bar. When the first AIDS memorial march, called Fighting For Our Lives, took place on May 2, 1983, the bar —together with other bars in the Castro— closed so that workers there could participate in the march. In 1986 the bar participated in benefits to fight the LaRouche quarantine proposition.

Cruikshank saw my mention of the bar's 'sex-positive' atmosphere in the midst of the AIDS epidemic as valid.

"I saw the Detour as a gathering place for the community that was bruised and battered by the plague," he said." I think the ominous darkness that you felt was partially informed by a palpable sense of grief."

The Detour had a remarkably long life in the neighborhood, lasting until 2005. It's easy to understand how a bar that brought so much joy and pleasure to so many would be fondly remembered.