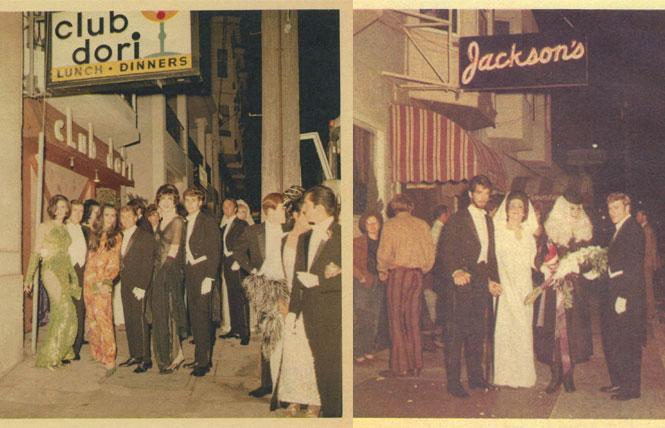 LEFT: A Halloween bus stops at Club Dori, in the late 1960s. Mel Domingo is third from left in the orange gown, and RIGHT: with flowers outside Jackson's. photos: courtesy Mel Domingo

Mention Halloween violence in the LGBT community, and most people think of events of the last decade, which ended the closing of Castro Street for the holiday. There is, however, a historical precedent that reminds us that history does often seem to repeat itself. That precedent is the explosion of violence that occurred on Polk Street in the late 1970s. 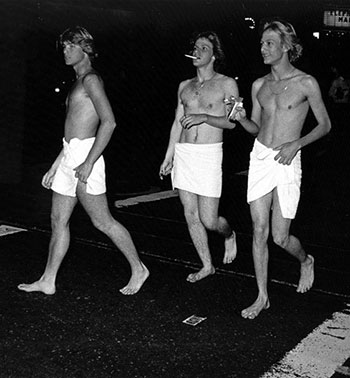 To understand what happened on Polk Street (and later Castro Street), it helps to look further back at Halloween traditions in our community. Back in the '50s, when people were arrested for cross-dressing, Halloween was considered a safe night when you could dress up and not face the threat of arrest. At the stroke of midnight, however, men in drag could be arrested for dressing in women's clothing "with the intent to deceive," as the law stated.
In The Empress Is A Man, the biography of José Sarria, author Michael Gorman wrote that Sarria consulted with lawyer Melvin Belli while working at the Black Cat and came up with the idea of making tags which men in drag would pin to their Halloween outfits which said, "I am a boy." As Gorman says, "That was the beginning of the end of the Halloween raids."
There was another problem related to drag and Halloween. How do you get to the bar and keep your outfit intact while having fun and staying safe? In Death Makes a Holiday: The Cultural History of Halloween, David J. Skal relates that drag queens would rent limousines and travel from bar to bar with their escorts. Eventually the tradition became so popular that people began to rent buses to travel in groups.

The first record of the Halloween buses that I was able to find was from 1961. Michelle, a popular entertainer, put an ad in the LCE News thanking the bars the Jumping Frog, the Hideaway, Talk of the Town and Jack's Waterfront for the hospitality shown to the theme bus "Michelle and the Hollywood Starlets." 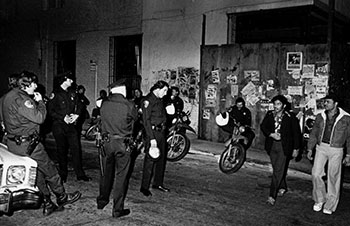 By 1961, Grey Line tour buses were rented. The Jumping Frog was one of the first Polk Street bars, so gays on Polk celebrated Halloween since 1961.

By the late Sixties and early Seventies, the concept of the buses had taken off. The Missouri Mule bar had a "Sentimental Journey" bus in 1973. The gay newspaper Kalendar sponsored a bus as well (and it usually won awards). Groups of friends would get together for themed buses.

"Bette and Friends" was a bus with a Bette Davis impersonator as its tour leader and in '76 they did a "Bette Davis on Canvas" theme where participants portrayed famous paintings.
Mel Domingo was part of a group called the "Universe Girls" which included Empress Willis V and Emperor Bob Cramer. Domingo remembered these events as part of his "best and happiest years in San Francisco."

The buses ran on a schedule, visited the bars (many, like the *PS, on Polk Street) and each entourage competed in costume contests.

Author Mark Abramson recalled, "I remember Zelda and the Pink Palace girls. Zelda carried a fly sprayer like farmers use to spray cows, but she filled it with amyl nitrate. She sprayed it over the heads of the judges."

These contests drew a large audience and contributed to the carnival-like atmosphere on Polk Street.

Perhaps the peak year for joyful festivities on Polk Street was 1975, when 50,000 revelers crowded the streets. The B.A.R. noted that the police escorted the buses to the bars for the judging to occur and that "everyone seemed to behave in an orderly manner." It was the last year this could be said.

In 1976 there were minor disturbances with 19 people being arrested, including 16 for public drunkenness. But word had gotten out that Polk Street was a good place to harass revelers. In 1977 the Board of Supervisors first decided against closing the street and then reversed itself. Much of the concern of the Board seemed to center around public displays of sexuality as opposed to public safety. The Chronicle quoted Alice B. Toklas Democratic Club president Frank Fitch as saying, "The only trouble we've had is from straights — usually teenagers — who think it's smart to come downtown to bully and bait people." 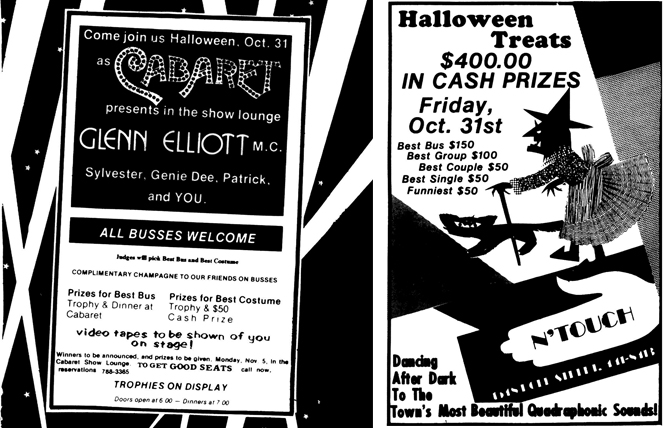 1977 was a peak year for trouble on Polk Street. In a November 1 article, under the headline "Thousands Frolic on Polk Street," the Chronicle reported, "At one point a celebrant tossed a tear gas cannister into the crowd, creating a brief panic as people struggled to flee the stinging cloud."

The article went on to say that a local television newsman forced his way through the crowd using his camera as a ram. The article quoted a gay reveler as saying, "I'm upset about all these straights here. There's no point to come here. All of the straights are just here to gawk at us."

The same day the paper ran an article on the murder of Robert Kerns, a 32-year-old waiter at The Grubstake, who had been stabbed to death in his apartment after coming home with someone from Polk Street. He was still wearing the ball gown he had worn to the event.

Although there were no murders attributed to events in 1978, it was not a peaceful gathering. 80,000 people had gathered on Polk and six store windows had been smashed. The Golden Knight clothing store at 1234 Polk was looted. The store owner was quoted in the Chronicle as saying, "I've been here 30 years and this is the first time something like this has happened."

By 1979, the community asked the Board of Supervisors to keep the street open. Cleve Jones, who was then a delinquency prevention commissioner, was quoted by the Chronicle as saying, "Polk Street had become a harsh and violent scene. People in costume stayed away and some people were beaten and stabbed. With Polk Street closed, everyone will be coming to Castro Street."

Jones prediction proved true. From 1979 on, the focus of Halloween festivities moved from Polk to Castro Street. And for a while at least it seemed as if the party would continue unabated — until history repeated itself. It was all very far from the parties on the Halloween buses which maintained a safe and happy atmosphere for well over a decade, until they ended in the late 1970s.

The author would like to thank Gerard Koskovich of the GLBT Historical Society and Mel Domingo.