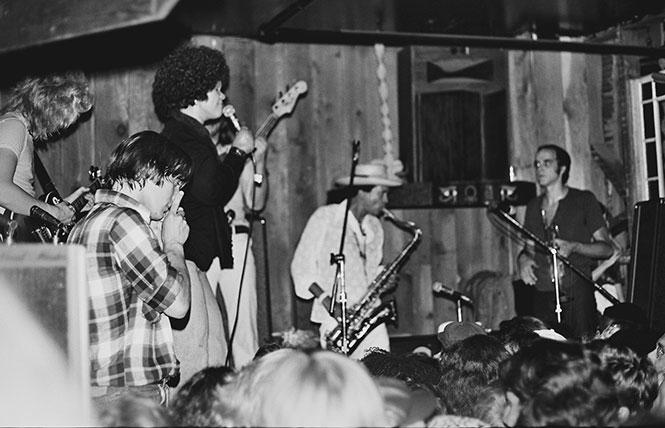 Etta James performs at The Stud in 1976. photo: Daniel Nicoletta

When we think of entertainment in our bars, the chances are that we think of drag performances or DJs more often than live music. But from the 1960s to the 1980s at the Stud (then at 1535 Folsom Street), live performances often ruled the night.

From its beginnings in 1966, the bar was thought of as the "gay hippie bar." In a 1982 column in the Bay Area Reporter, Mr. Marcus referred to it as "the haven for Gay hippies and all the counterculture groups in town." 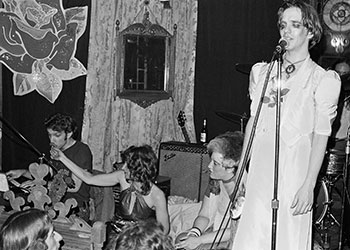 Tahara, one of the Cockettes, is quoted in The Fabulous Sylvester, a biography by Joshua Gamson, as saying it was a bar where "everyone far out went every night." So it's not surprising that it would have a thriving live music scene.

When the performances began is not easily determined. The first band listings I found were from August 17, 1974 in the Gay listings of the Bay Guardian. I asked members of the online history group San Francisco Remembered for input and a member from the neighborhood remembered live music there as far back as 1967.

It's also a bit difficult to determine the calendar of performances there, because by the '70s, the bar was getting a reputation as a good space for musicians to try out new material. Several spontaneous concerts were held at the bar.

Another member of San Francisco Remembered recalled a surprise Elvin Bishop performance there in 1973. Author Mark Abramson recalled that a friend was visiting San Francisco in the winter of '74 when Etta James "just popped up out of nowhere and sang" at The Stud. 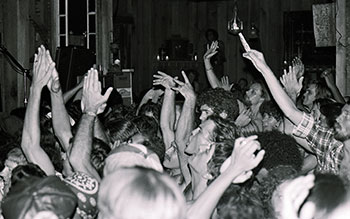 An enthusiastic crowd at an Etta James concert at The Stud in 1976. photo: Daniel Nicoletta

Regardless of the vagaries of early performances, we know from Gamson's book that Sylvester and many of the Cockettes were hanging out at the bar by 1970, when Sylvester moved from South Central L.A. to San Francisco.

By the mid-'70s, Sylvester was in the midst of a musical change. He had been dropped from his label Blue Thumb and had stopped performing with the Hot Band (his rock band) by the end of 1975.

By 1976 he began performing with Martha Wash and Izora Rhodes Armstead (a/k/a Two Tons of Fun). His first performance at The Stud with his new lineup was on August 15, 1976. They would return for performances in April and May of 1977.

Granted, The Stud was not the only gay bar Sylvester was performing at in this period, but it was one of the bars that supported his career before his first album came out on Fantasy records in the summer of 1977. 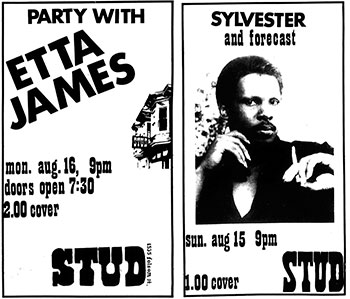 Sylvester was not the only ex-Cockette to appear onstage at The Stud. Pristine Condition had been in bands since at least 1973, when he was part of the group Paula Pucker and the Pioneers, who opened for the New York Dolls at the Matrix in San Francisco.

In one of his appearances at the Stud, on Valentine's Day 1976, Pristine appeared with Billy Philadelphia (who played with Commander Cody), Naomi Ruth Eisenberg (played with Dan Hicks and his Hot Licks), Patty Rodriguez, Pearl Heart and Jo Baker from Stoneground. Though he played other times there, that concert was captured on film by photographer Daniel Nicoletta.

The Stud was a vital stage for local talent. Women's bands Sweet Chariot and Pegasus performed there, as did the gay men's band Buena Vista, who were in the 1977 film Word Is Out.

Richard Dworkin, the drummer with the band (who would go on to play with Alex Chilton, James Chance and Michael Callen), said they played there three times in '76 and '77 and that they "are among some of my most memorable performing experiences."

The set of performances at The Stud that achieved legendary status were the shows by Etta James. From August 16, 1976 through February 14, 1984, she appeared at the bar on a regular basis (often on Valentine's Day and sometimes more than once a year). Often these concerts were not advertised in advance in the straight press - you had to read about it in the gay press or find out by word of mouth. 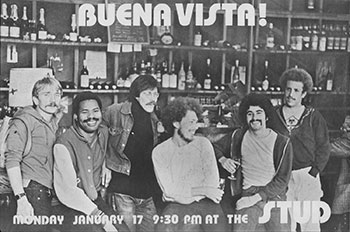 Ad for Buena Vista live at the Stud in January, 1977. courtesy: Richard Dworkin

For James, the city was a special place. Her mother brought her here as a child and she became a singer here. In the mid-'70s she was in recovery from addiction and in between albums. She talks about the special place the city had for him in her autobiography Rage To Survive: The Etta James Story:

"San Francisco was my only salvation. My strongest fans are there, many of them gay men and lesbians. I'm not sure how that happened. I like to think they're responding to my honest emotions. They know what bigotry's about. They understand hard times and heartache; they like it when someone lays it on the line."

Artist and activist Silvana Nova saw James perform in the mid-'70s and the experience has stayed with him till today:
"Imagine seeing a legend (and she was, even then) in such an intimate setting!," he wrote. "The stage was smaller than postage-stamp size. She was having a great time and seemed to be in her element. She talked about growing up in SF, and she was obviously very comfortable with a gay audience....The voice! It was as raw and as vibrant as any of her recordings, but live it was so much more. She was for real... and she was absolutely filthy. She went down on the mic, made all kinds of lewd comments, and (my favorite thing) she would turn around, hang her very ample and callipygous derriere over the edge of the "stage" and kind of wave it in front of the audience. It was both a taunt and a come-on; the audience, of course, went wild."

James's fans in the community obviously took notice. Writing in the B.A.R. in 1979 in his Up, Coming & Choice column, Adam Block said of an upcoming concert, "Etta is as gutsy, raunchy and moving as any singer alive, as any who saw her monumental performances at the Stud can testify."

There was a funky element to the organization of concerts: James' dressing room was across the street in the bathroom at Hamburger Mary's. Regardless, the experience caught her on an upswing in her career. In 1978 she recorded with Jerry Wexler for Atlantic and opened for The Rolling Stones the same year. Her performances from this period are documented in Etta James: Live from San Francisco, recorded at the Boarding House in 1981.

The creative energy still lingers on from the live musical performances at the Stud. It was the birth of the live music scene in South of Market. Whenever you see performances at clubs like Oasis and The Eagle today, you are fulfilling the promise of a club that saw Etta James and Sylvester through the hard times and gave local bands a chance. The spirit of live music at the Stud lives on in our clubs today.

The author would like to thank Richard Dworkin, Dan Nicoletta and Silvana Nova.

For a detailed history of the Stud see Mark Freeman's wonderful online article at https://markhfreeman.wordpress.com/the-stud-decade-by-decade/