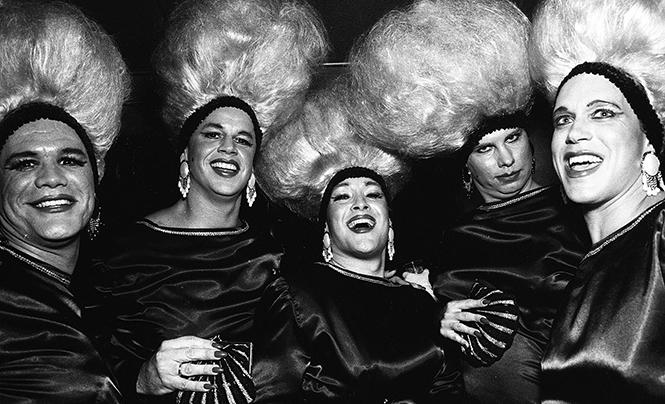 Members of the Muscle System gym, done up in drag for their annual Halloween drag party, celebrate at Cafe San Marcos in 1990  (Source:Rick Gerharter)

The late 1980s saw something of an explosion of women's venues, which was followed shortly thereafter with an implosion. Café San Marcos (2367-2369 Market, which in 1991 became The Café) found itself in an unusual situation during that period. The bar started drawing women around 1987. As other women's venues closed, the venue found itself in something of an identity crisis: was it a mixed bar or a women's bar? As I frequented the bar in this period, I had a ringside seat to the changes. 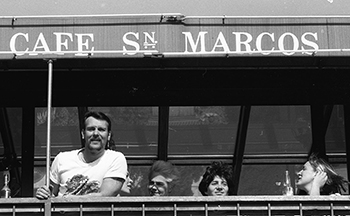 In research for this article I discovered advertisements for Café San Marcos in publications with a high percentage of women's readership (Coming Up!) as far back as 1985. It was first referred to as a mixed bar was in the Bay Area Reporter. An article about the bar from May 17, 1990 was entitled "Portrait of a 'Nice Mixed Bar.'" 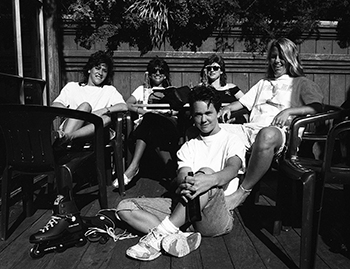 Patrons on the back sun porch of Cafe San Marcos in 1990. Photo: Rick Gerharter

To drive home the point, the article quoted then-manager Marcus Wonacott: "On Friday nights, for instance, he says the bar is 'filled with wall-to-wall women. It's important that people know that we support the women's community specifically.'"

By 1991, the bar began to refer to itself as "The Only Mixed Bar In The Castro" in its advertisements.

I began going to The Café in the late '80s. My friend and former coworker, the artist and writer Signe Cook, suggested we go there after Maud's (937 Cole) closed in 1989. The Café was a place to get together and talk on weekend afternoons. We may have been somewhat out of the mainstream in this, as in a 1988 article on Ollie's closing (4130 Telegraph, Oakland), Rikki Streicher said, "Talking bars are becoming obsolete. Talk isn't so important anymore; it's the look that's important." 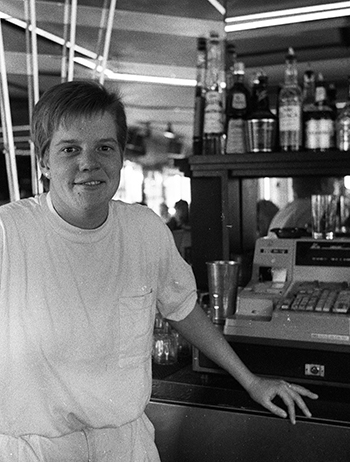 Streicher's comment was in reaction to change occurring in the women's community. Peg's Place (4737 Geary) had also closed in 1988. Meanwhile, a variety of weekly dance nights like Skirts (177 Townsend), Club Mystique (22 4th Street) and Club Rapture (1484 Market) opened around town. Some of these clubs were mixed too.

Lucie Faulknor, one of the founders of Skirts, discussed co-founder Mariah Hanson's philosophy in Coming Up!: "Mariah wanted a women's club where men are welcome as long as they know it's for women. Like at men's clubs, we're welcome even though it's understood it's for men."

Still, the place of "mixed bars" could be confusing. In November 1991 the San Francisco Bay Times reacted to Amelia's closing with a headline that stated "Last SF Lesbian Bar to Close." 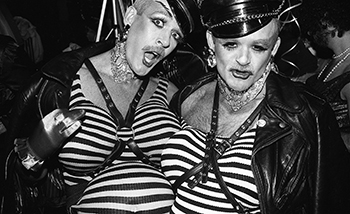 Members of the Muscle System gym, done up in drag for their annual Halloween drag party, celebrate at Cafe San Marcos in 1990. Photo: Rick Gerharter

The next month, however, it noted that Del Martin and Phyllis Lyon were celebrating the 20th anniversary of the publication of Lesbian Woman at the Café.

Roberta Achtenberg celebrated her victory in the "Lavender Sweep" at Café San Marcos on November 6, 1990. Although she is a lesbian, the victory was community-wide. I was reminded by my friend (and former bartender at Café) Lu of an animal rights event at the Café in the early '90s which Grace Slick attended, an event not geared toward any particular orientation or gender.

Among the bar's prominent events was the annual drag party sponsored by the Muscle System Gym. That event became so popular, in its later years, it was moved to Eureka Valley Recreation Center. 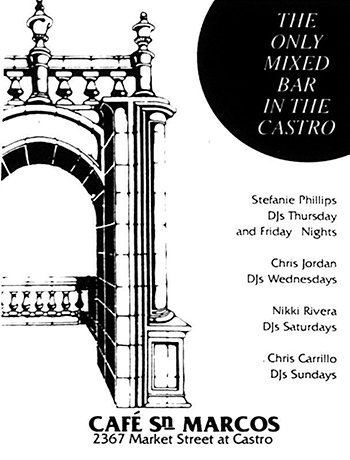 Café San Marcos ad in the

Café was mixed in another way: as well as being a mix of genders, it was a daytime talking bar and a nighttime dance bar. Though we were there mostly in the daytime hours, we occasionally stayed until the early evening when DJs like Stephanie Philips started their sets. It was this mix that generated conflict.
It didn't surface till 1994. In a February 1994 article, "Where Women Dance" in San Francisco Bay Times, author Anderson asked (regarding Friday nights), "What's with all the men?" She also asked, "Guys, please, can't we just have one night without you? It's not like we have the same options you do."
In an April 14, 1994 Bay Area Reporter column author and activist Rachel Pepper wrote, "The one Castro area women's bar and the only full-time bar identifying in the whole bloody city as lesbian, the Café, is trying to push out the women to go gay. As in gay men."
A spate of letters responded and a cover article from May 5, 1994 in the B.A.R. by Katherine Collins asked "Is The Café Trying to Get Rid of Women? Most People Say No."
In a letter to the paper (May 16, 1994) then Café manager Morgan Gorrano said, "The Café is a mixed bar. It is a bar for women and men, not one or the other. If you are a man and don't like women, don't come here. If you are a woman and don't like men around, don't come here. If you like the mix, want to dance and drink in pleasant and safe surroundings, you'll have a good time and be treated well by our staff." 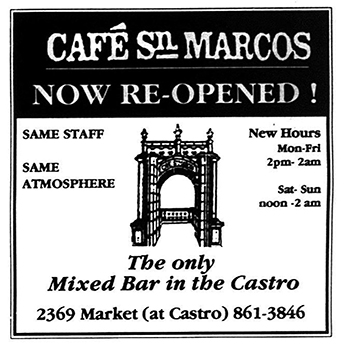 I didn't know about the tension and was told by my friends about the letters. I don't think I was being oblivious as I was in the bar mostly during the day, when it was less crowded. I was there to visit with my lesbian friends and not to cruise men, so the issue went right over my head.
In 1996 Signe moved to Southern California, and I stopped visiting the bar nearly as often. By 1997 the Lexington Club opened. As the Café was no longer the only bar in town that functioned as a women's bar, the issue seemed to fade away.
Our community's attitude toward mixed bars is complex. Mixed bars like Wild Side West still exist, but tend to be ignored when bars like the Lexington Club close. As this March is not only Women's History Month, but the sixth anniversary of my friend Signe's death, I would advise you to treasure the time you have together and enjoy the company of your friends in places where you have a good time together. That is what the memory of Café in the '90s will always be for me.

When Marlene played the Bay: Dietrich's Concerts were a sensation
Sign up!