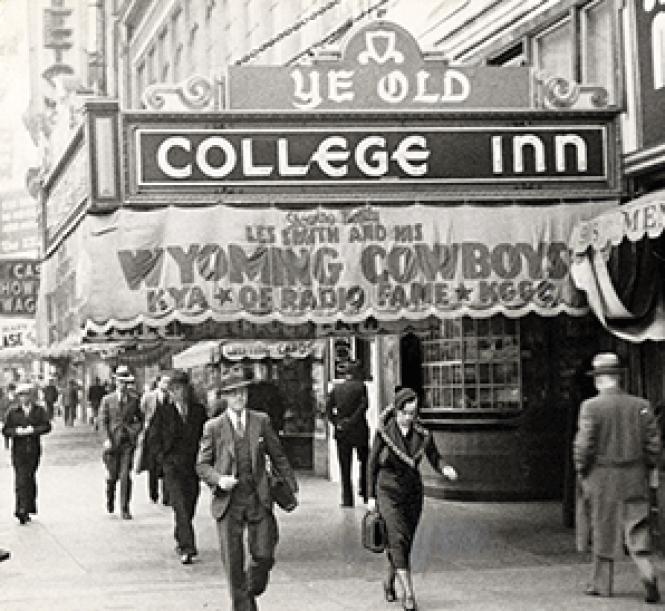 Late in 2016, the press buzzed with word of tunnels beneath the 900 block of Market Street that provided escape routes from bars. These bars were the Old Crow (962 Market), The Silver Rail (974 Market/67 Turk), The Pirates Cave (972 Market) and the College Inn (920 Market).

There was more underground about these bars than tunnels, however. They were a hotbed of trade that predated the bars, which eventually led to the fame the Old Crow achieved as a hustler bar that spawned several films of David Hurles, aka Old Reliable, in the 1970s.

Trade is a word with a history. The Oxford English Dictionary defines it as "A man, esp. one who does not identify as homosexual and who is not penetrated sexually, who is sought, and sometimes paid, as a casual sexual partner by another man; sexual intercourse with such a man; such men collectively."

The OED traces the use of the word in the U.S. as far back as 1919. Historian and author Rictor Norton says the word comes from English prostitution slang:

"'Trade' is the standard word for prostitution in the 18th century, and there are several instances when it was applied to sex between men, e.g. John Dunton in The He-Strumpets: A Satyr on the Sodomite-Club, 1707, says that female prostitutes are so affected by the clap 'That now Mens Tails have all the trade.'"

Trade was certainly familiar in San Francisco before the Old Crow. In 1974 the B.A.R. published a series of articles entitled "The Golden Age of Queens" by an author named Toto le Grand. He was identified by the GLBT Historical Society's newsletter as Lou Rand Hogan, author of The Gay Cookbook (1965) and The Gay Detective (1961, later renamed Rough Trade.) Hogan moved to San Francisco in the late 1920s and his series in the B.A.R. described life during prohibition.

"Market Street was the focal point of all the action; remember, up until 1932 there were no bars...you met on the street... and Gawd! Was Market St. gay! Local belles all had to make the scene each evening. The promenade was marvelous to behold. Recall a mad 'girl' called Anne Pennington who would stop anything male on the pave and purr, "Would you like a fancy boy tonight?" Of course nine out of ten ignored her, but that tenth!"

Hogan also recalled how the Unique Theatre (757 Market), which existed till the mid-'30s was used for 'dates'.

"It was a 24-hour movie and 'flop' house... at times, however, one could pick up an occasional middle-of-the-night trick. In fact, the house was kept so dark (to hide its grime) that one could do the trick right in his seat."

Into this world the bars of Mid-Market were born. On April 15, 1933 (one week after 3.2 percent beer became legal) the College Inn opened and on May 13 the Pirates' Cave opened (the Old Crow did not open till 1935, before that it was the Rainbow Tavern). From the moment the bars were opened they were in trouble, although most of the trouble was related to sailors and women.

On July 14, 1933 the San Francisco Beverage Commission ruled that no female feet were allowed on the brass rail (which meant that women could only get table service for drinks and not be served at the bar). The following week the Commission ruled that women were permanently barred from the College Inn, the Pirates' Cave and the Rainbow Tavern. It's unclear how long the ban remained in effect.

On February 26, 1934 six sailors were arrested at the Pirates' Cave for disturbing the peace and later that year the bar had its liquor license suspended. Again in 1935 the Pirates' Cave and College Inn were closed for "vice conditions."

By October, 1938 Police Chief Quinn was urging the liquor license for the College Inn be recalled because it was "frequented by people of troublesome and immoral character." In May, 1941 the College Inn gave up its fight and was replaced by a clothing store.

These bars were not gay in the sense of modern bars. They would probably be considered "mixed" today. In an article entitled "Down Memory Lane," B.A.R. publisher Bob Ross recalled the bars (note that both the College Inn and Pirates' Cave were occasionally called "den"):

"There was the Pirate's Den on Market Street, and next door to that place was the College Inn which housed an all-girl orchestra with lots of sailors in attendance; and where the sailors went, the gays went also."

The Silver Dollar (64 Eddy) opened in 1937 and the Silver Rail in 1941 and by then the scene regarding servicemen and trade was pretty well developed. On July 3, 1942 both bars and the Pirates' Cave were put on the "off limits" list for Army personnel and military police were stationed outside the bars to warn away members of the armed forces. It was the last straw for the Pirates' Cave, which went out of business that year.

It is particularly odd that in the same year that the Silver Rail was being put off-limits that the USO decided to open up the block at 989 Market. It remained open till 1947, when it was reported that it had served 4.5 million servicemen. There is no word on how many were served at the Silver Rail and Old Crow.

Notorious as they were, the first overt mention of homosexuality wasn't connected to the bars in the press till 1953. Prior to that they were called thing like "notorious places of contact for venereal diseases."

In a short article on Dec. 17, 1953 the Examiner mourned the passing of the Silver Rail by saying, "The Silver Rail, one of the gamier Market Street dives, is now out of business. The Silver Dollar outlasted it by seven years, closing in 1960."

The Old Crow was the last bar to close in the 900 block of Market in 1980. In '74, Hogan said, "The Old Cow (it'll never be Crow to thousands) is still going strong, though we wouldn't trust ourselves inside."

Voicing a different opinion was Bob Ross who, in an oral history with the GLBT Historical Society, said, "the Old Crow was just a great pickup place for hustlers. And that went on many years."

Did the bars leave a legacy aside from tunnels? Perhaps. There was an oft quoted phrase which Hugh Selby used in Last Exit to Brooklyn and John Rechy used in City of Night: "Today's trade is tomorrow's competition."