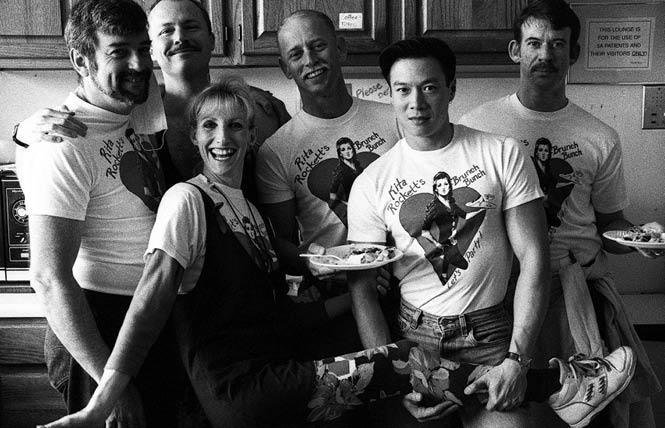 Rita Rockett with some of her Sunday Brunch volunteers in April 1992  (Source:Rick Gerharter)

The roots of our holiday traditions in the gay community run deep. I have written articles which traced these traditions all the way back to the publications of the Mattachine Society in the 1950s and toy drives for orphans and children in hospitals at Crossroads (109 Steuart Street) in 1961. It should come as no surprise that when the darkest days of the AIDS crisis hit, we responded in the spirit of the season.

Inspiration came from unexpected places. On October 27, 1985 Steven Russell and Frank Burt chained themselves to the door of the Federal Building in United Nations Plaza. Thus began the encampment known as the AIDS/ARC vigil. It lasted ten years.

On Thanksgiving Day 1985, the vigil was inundated with food when members of the Metropolitan Community Church congregation came down to the plaza to share dinner. A Christmas tree was sent to the vigil from Germany and carolers came down to sing to the people on the plaza.

Rita Rockett began her brunches on Ward 5-B (and later on 5-A) beginning around Easter 1984. She had been working at bars like The Balcony (2166 Market) and Castro Station (456 Castro) since the 1970s. Dennis Yount, who bartended at The Eagle, was a close friend of Rockett's. She planned a party to cheer him up. Unfortunately, Yount died before the party, but Rockett was undeterred and began a series of legendary brunches that stretched on for years.

In 1986 she told the Bay Area Reporter's Mike Hippler, "If you come from the South, whenever anything is wrong, you bring food. If somebody is sick or has died, somehow that always makes it right. It brings people together."

Around this time of year, Rockett's brunches naturally involved the holidays.

As Hippler noted, "Cooking and serving are not the only thing Rita does at her brunches. She also entertains. At Easter, she was the Easter Bunny; at Christmas she was Mrs. Claus. Sometimes she invites local entertainers like the Vocal Majority to perform, and she herself tap-dances."

In the days before life-saving medications, the difference between life and death could be something as simple as being motivated to eat. In a 1987 article about another series of dinners for people with AIDS and ARC given by the late Victor Rodriguez (also known as Rod or Roxie from the Elephant Walk) Rockett told the B.A.R:

"People are motivated to eat if they're not by themselves. That's one of the hard things about this disease, being alone. No one wants to be by yourself, especially if you're sick."

Turning the crisis into benefit parties gave people a way to contribute to people who were sick, and to celebrate community at the same time.

On Wednesday Dec. 12, 1986, Rockett took over the High Chaparal (2140 Market - now Lucky 13) for her fifth annual Family Reunion and Christmas party. The event was also a benefit for the Ward 5-A Brunches and their 1986 Christmas Party. At the well-attended event, Ruth Brinker (founder of Project Open Hand) and San Francisco Chronicle columnist Herb Caen stopped by, and attendees brought gifts for people on the Ward.

Benefits during the holidays became increasingly popular through the 1980s. Many of them were for Ward 5-B.

The bar Sutter's Mill had a Christmas party in 1987 for the staff of the ward and for Shanti.

In 1985, The Eagle hosted "An Eagle Christmas" with a buffet and a tree lighting benefit for Ward 5B. It must have been successful, because in 1988 "Lights for Life" invited people to donate five dollars to light Christmas tree lights for the AIDS Emergency Fund. 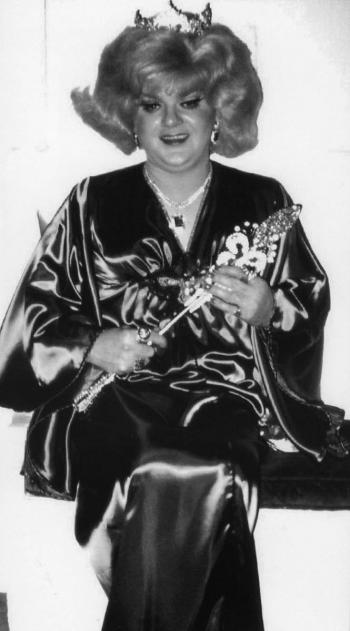 Tessie's Times
In 1974, drag queen Tessie (aka Polk district bartender Perry Spink) received several spare turkeys that holiday season, so he cooked and served them to Tenderloin residents. Elected the Red Rose Empress XV, as Tessie, Spink became known for a dedication to feeding the hungry. The Tenderloin Tessie dinners continue today at Easter, Thanksgiving, and Christmas, staffed with volunteers that include Imperial and Ducal Court royals.

Other acts of goodwill filled the community with a creative spirit.

The Eureka Valley Merchant's Association and the Names Project sponsored a Christmas Tree lighting in 1987, where community members brought ornaments with the name of a friend who had died from AIDS.

Gary Brown (a.k.a. Brad Mason in adult videos) dressed as Santa and collected money to buy AZT for AIDS patients at the corner of 18th and Castro.

An article on "Every Penny Counts," the AIDS Emergency Fund effort to get pennies from bar customers, was featured in a late November article in the B.A.R. in 1987 with bartenders from the Elephant Walk.

During this period you could not go a week without reading about benefits in Mr. Marcus, Sweet Lips and Mark Friese's columns in the B.A.R. In the face of sickness and tragedy, the LGBT community and their allies stood up, joined together, celebrated and raised money for a multitude of causes. In the Reagan years they had to do this. When help was slow in coming from the national government, the people of the city filled the gap.

Having just come from a benefit for Camp Sunburst for children with HIV/AIDS at Aunt Charlie's, I can tell you that this is a tradition that continues today. The message of hope and joy from those dark times continues to inspire to this day. Remember and treasure this generosity, no matter how you celebrate the holidays. 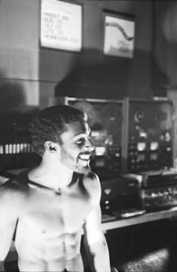