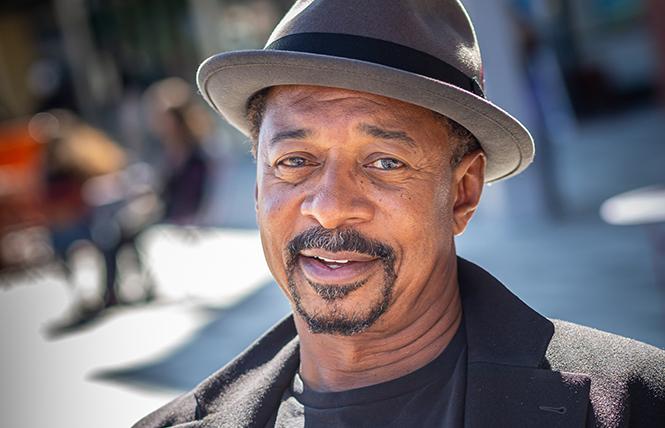 Shooting hoops with gang members in a Chicago housing project. Performing Shakespeare for an audience of pimps. Making trouble on the set of classic gang flick "The Warriors." Working with lifelong idols like Sidney Poitier and Diahann Carroll. Robert Townsend, who helped pioneer 1980s independent cinema with "Hollywood Shuffle," has a file cabinet's worth of autobiographical anecdotes. Being a well-known actor-director, he's told them hundreds of times. He's woven them into stand-up comedy routines, recounted them on talk shows and press interviews, and served them up on the lecture circuit. But unlike many celebrities who replay their life story's greatest hits with the automated efficiency of a jukebox, Townsend spins even his oldest oldies fully juiced.

In his generous, joyful solo performance "Living the Shuffle," running at the Marsh in Berkeley on weekends through Dec. 1, Townsend's tales don't feel so much remembered as relived before the audience's eyes. He's a physically confident actor, deliberately prowling and pacing the small stage as he chronicles his path from inner-city childhood to showbiz success. Townsend's elastic voice brings a surprising array of supporting characters into the spotlight with him, from Alfred Hitchcock to Eddie Murphy.

"Look, I'm a natural performer," he says. "When I'm directing a TV show, I'm making the crew laugh really hard. When I'm pitching to a network or a studio, it's a storytelling performance."

During both his show and an interview with the Bay Area Reporter after a preview performance, Townsend, 62, exudes well-earned pride in his career and his championing of other African-American talents. But "Living the Shuffle" never feels like auto-hagiography.

"I'm telling stories I've told my whole life," says Townsend, "but I've tried to structure it in a way that lets the audience in. It's not about watching me, it's about feeling these experiences with me.

"I really want it to feel inspirational to a new generation of creative people," Townsend says of the show, which is a testament to self-determination. "Never see obstacles. See opportunities."

Townsend says he felt a particular satisfaction when the first Marsh preview audience spontaneously applauded as he began to tell a behind-the-scenes story about "The Five Heartbeats," his 1991 feature film about a 1960s R&B vocal group modeled on The Temptations. "The studio didn't know how to market it, and it wasn't a hit in theaters. But people started to discover it after it began playing on television, and it just had this incredible word-of-mouth. Now over 300 million people have shared clips on social media."

In "Living the Shuffle," Townsend waxes nostalgic about growing up nicknamed "TV Guide" because he was known for memorizing the complete evening schedules for the three channels available on his family's set, along with the dialogue from many of the shows. But today, he's an advocate for the proliferation of media outlets, having created work for platforms from MTV, where he directed a young Beyonce in 2001's "Carmen: A Hip-Hopera"; to TBS, directing episodes of Tracy Morgan's "The Last OG"; to MBC, HBO, the WB, Netflix and The Black Family Channel, where he served as President of Production for four years beginning in 2003.

"The beautiful thing about where we are with content and social media," says Townsend, who recalls being told in the 1980s that "Hollywood only makes one black film a year," "is that the best things really do have a chance to rise to the top. There are things you're going to find out about and watch because of your friends, family, people you really trust. A movie studio can't buy that kind of word-of-mouth."