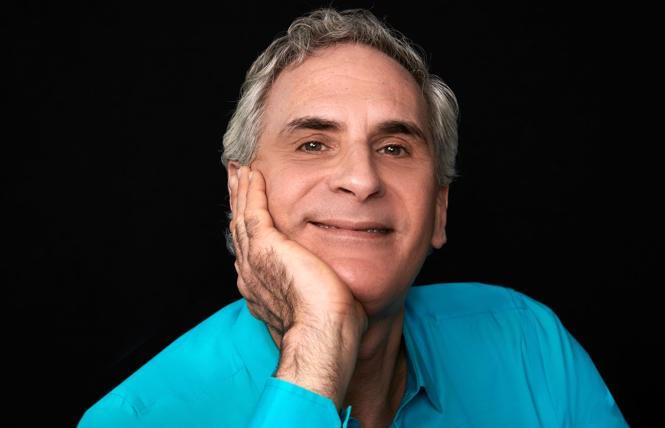 Alas, that project never came to fruity fruition. But this week, San Francisco's Theater Rhinoceros hosts the debut of an altogether different Hart to Hart project from gay cabaret ace Mark Nadler, abrim with its own bonanza of queer bonafides.

A product of Nadler's own extensive archival and biographical detective work, "Hart's Desire" is a sort of Golden Age mash-up that draws on the legacy of its unrelated titular duo.

Lorenz Hart (1895-1943) was the diminutive, lovelorn gay collaborator of Richard Rodgers. His evergreen lyrics for songs including "Isn't It Romantic," "Blue Moon," "My Funny Valentine" and dozens more are infused with his own frustrated longing.

Moss Hart was a bisexual, psychotherapy-immersed playwright and husband of actress and quiz show panelist Kitty Carlisle. His barbed humor and snappy dialogue, co-written with George Kaufman, animated Broadway hits including "The Man Who Came to Dinner" and the Pulitzer-winning "You Can't Take It With You."

Pastiche born of pandemic
When Nadler found himself with time on his hands during the pandemic, he turned his attention to this long aborning project.

Said Nadler, in a recent interview with the Bay Area Reporter, "I always thought it would have been wonderful if these two men who had to hide their sexuality during their lives had the opportunity to write a musical together with an openly gay storyline."

Nadler, a renowned interpreter of the Great American Songbook, has headlined the Algonquin, Town Hall, Carnegie Hall; appeared on Broadway accompanying Dame Edna Everage; and won a 2009 Bay Area Critics' Award for Outstanding Solo Performance for his Gershwin show "His Lovely Wife, Ira." For "Hart's Desire," he has created a theatrical mix tape.

"I've assembled excerpts of dialogue that Moss wrote for many different plays and paired it with Rodgers & Hart songs," he said. "Hopefully, it feels as if the two Harts actually worked together on it."

Nadler will be debuting "Hart's Desire" as a solo performance. "Because it's technically cabaret, I don't have the rights issues to deal with that a full production would require," explained Nadler. "And frankly, I don't think the Hart estates would ever approve the songs being used for this gay plot line.

"But it's a real musical!" he explained. "I'll be playing eight characters, male and female ... and the orchestra. I'll even be doing a tap number. The challenge is to make it clear for the audience which character I am at any given time."

Deep research, deep feelings
The plot is not a biography of either Hart. Instead, it leans into the storyline of Moss' play "Light Up The Sky," a farcical backstage drama full of crisscrossing unrequited male-male romances. Set in 1943, it includes not only classic tunes like "The Lady is a Tramp" and "Bewitched, Bothered and Bewildered," but treasures that Nadler uncovered in his research.

"In the Library of Congress," he recalled, "I found the chicken-scratched melody by Richard Rodgers for lyrics that I'd found in a book on Lorenz Hart. The song is called "Good Bad Woman" and it had never been performed. The melody didn't exactly scan with the lyrics, so I added my own chords. Another song, 'Smart People,' existed only as lyrics, so I wrote the music trying to approximate Rodgers' style."

While he's never written a book musical before, Nadler, 61, brings not only his expertise on the Harts and performance experience to bear, but also a period studying sit-com writing under the tutelage of Bill Idelson, who wrote for "The Dick Van Dyke Show" and television's "Odd Couple."

Nadler says he feels personally connected to some of the deeper themes in the lives of Hart and Hart that the show lightly touches on.

"I think that gay men often have this fantasy and this pressure that they should always upgrade and get something better than what they already have in terms of romance," he said. "But in this show, you have an older gay man who is really in touch with his limitations, but falling in love with someone in his twenties. You have to think about the extent to which, as the song says, you're "Falling in Love With Love."

Supporting queer creativity
The creative seed for "Hart's Desire" was planted over a decade ago when Nadler provided piano accompaniment for Theatre Rhino artistic director John Fisher's own play about Oscar Levant and Arnold Schoenberg.

"Back then," said Nadler, "John encouraged me to develop a one-man show about Larry Hart. That started me thinking about how much I love Moss Hart's bitchy, snappy repartee, and how the two of them had a lot in common."

Theatergoers who appreciate Theatre Rhinoceros' support of such inventive, original, homocentric endeavors may want to provide their own support for the Rhino by attending not only "Hart's Desire," but the one-performance-only Rhino Extravaganza benefit that will take over the Gateway Theater following Nadler's final matinee performance on Sunday, May 15. The show will feature song, dance, drag and comedy from Bay Area talent along with food, drink and prize drawings.

Theatre Rhino charges ahead in new season
Sign up!