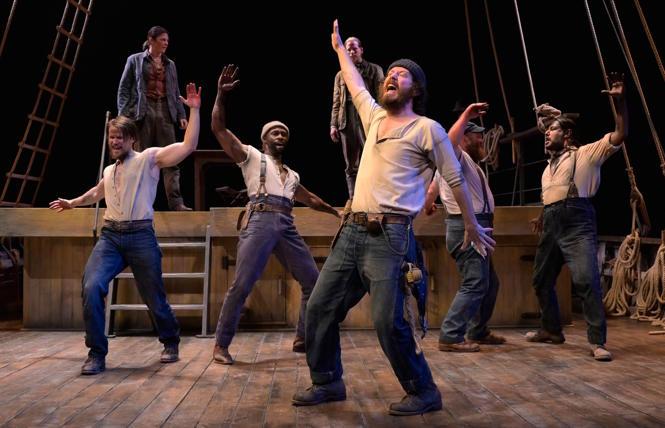 The cast of 'Swept Away' at Berkeley Rep.   (Source:Kevin Berne/Berkeley Repertory Theatre)

There are sparkling bits of beauty bobbing on the surface. There are treasures that one hopes will eventually be salvaged.

But like the 1888 shipwreck and its aftermath that are chronicled in Swept Away, an earnest, eventually engrossing new musical with songs by the Avett Brothers now in its world premiere at Berkeley Rep, the production in its current form feels like a tragic mishap.

This may not immediately occur to you in the wake of the show's closing moments, because, in and of itself, the intermission-less staging's second half —four survivors adrift on a lifeboat, reckoning with mortality— largely succeeds as a dark experimental chamber musical.

Director Michael Mayer (American Idiot, Head Over Heels) exacts meticulous physical performances from his castaways through this passage. Played by John Gallagher, Jr., Wayne Duvall, Stark Sands and a revelatory Adrian Blake Enscoe, they subtly shift their dwindling weight and rearrange their limbs in the close quarters of their small wooden limbo, a floating human jigsaw puzzle. When Little Brother (Enscoe), growing weaker before our eyes, leans back over the gunwale, arcing his slender neck toward heaven, we feel the sorrow of a sea-born pieta.

To keep us visually engaged with this near-tableau, Rachel Hauck's stunning scenic design places the survivors' boat atop an unseen vertical axle that slowly rotates 360 degrees, exposing the men's agony from every angle. Kevin Adams' lighting, too, focuses our attention, setting the fragile craft amid an endless expanse of subtly shifting blues.

Given the foursome's long days and nights of introspection, terror and, surely, boredom, singing makes sense as a way to pass time and vent emotion. And the Avett Brothers intricately crafted Americana —played by an offstage ensemble of violin, banjo, cello, guitars and drums— feels appropriate to the show's 19th-century period.

But with very few exceptions, the lyrics of these songs, plucked from throughout the Avett catalog by prolific book writer John Logan (last represented in San Francisco by Sting's marine muddle The Last Ship), don't align with an increasingly harrowing plot, and the intricate picking and often lively tempos are more reflective of the Avett's overall sound than individual characters' moods or personalities. 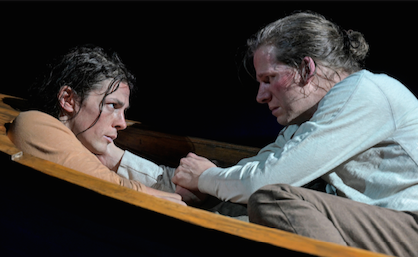 Still, Gallagher's hallucinatory, soul-bearing rendition of "Satan Pulls The Strings" demonstrates the full theatrical potential of an Avett song more tightly yoked to a character; the quartet's intertwined harmonies carry metaphorical as well as musical weight; and the reedy plaint of Enscoe's tenor evokes a beacon cutting through the men's dark night of the soul.

For an unreasonable portion of the show's running time, the crewmen toss gunnysacks, sing shanties, haze newbies and dance jigs to no particular end. The tonal shift that follows is a disaster, like Pirates of Penzance colliding with The Old Man and the Sea, or Broadway piling on to the Brooklyn Academy of Music.

The talent involved is impressive even in these early sequences. Choreographer David Neumann elegantly evokes the sway of the sea in performers' shifting postures, and there's an intriguing hint of homoeroticism amidst deceptively casual footwork by the strapping all-male cast of eight (If you're a fan of dancing bears, you'll certainly be entertained). The lighting, sets and maritime sound design, by Kai Harada, are all polished to a sheen.

The rift between Swept Away's two modes is marked by a spectacular feat of stagecraft, which literally tears the musical asunder, obliterating a life-sized whaling ship and casting our protagonists to sea.

The most talked-about moment among audience members on opening night, it also suggests two possible futures for this still-in-development production. Swept Away is either irreparably broken or will find coherence and make its way to shore. For now, it's fascinating flotsam.

'On Broadway' - documentary raises the curtain on theater history
Sign up!