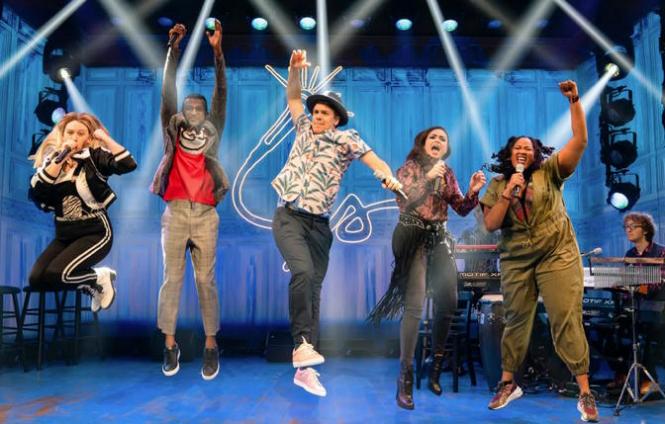 The cast of 'Freestyle Love Supreme'

San Francisco stages are now hosting two of the more unorthodox musicals to hit big on Broadway in recent years. Eschewing musical comedy tropes, The Band's Visit reaches out to audiences more subtly and poetically than much Broadway fare, while the Lin-Manuel Miranda imprimatured Freestyle Love Supreme takes a nearly opposite tack, grabbing attendees by the collar and inviting audience participation in the closest thing to an open-mic night that's ever played The Great White Way.

Band on the run
Haled, a super chill, slightly silly trumpet player in the Alexandria Ceremonial Police Orchestra, has a go-to pickup line: "Do you know Chet Baker?"

In The Band's Visit, playing at the Golden Gate Theater through January 30, the young Egyptian musician, played by Joe Joseph with a swoon-inducing balance of ingenuousness and suavity, first tries his come-on with a pretty ticket seller at an Israeli bus terminal.

He and his bandmates, in sky-blue pseudo-military uniforms that make them look as much like ice cream men as government emissaries, are trying to catch a ride to a small town where they've been booked to perform at the local Arab cultural center. 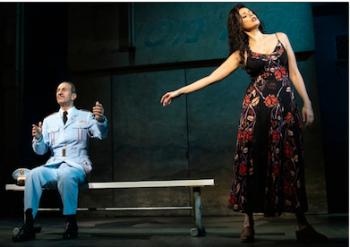 Sasson Gabay and Janet Dacal in 'The Band's Visit'

Flummoxed by the woman's disinterested response to his flirtation, Haled is unable to focus on her attempt to clarify which of two similarly named towns is his group's destination. He buys the wrong tickets. They end up in the wrong place. A night of low-jinks ensues (No brassy Broadway escapades here; just intimate conversations, familiar domestic scenes, gentle jokes). The next morning they get on another bus and head out.

That's the plot of The Band's Visit.

If you know Chet Baker and you dig Chet Baker, you'll find Haled and the whole of this show as seductive as a summer breeze. As in Baker's late career vocals, there's a tender bruise pulsing beneath every note of David Yazbek's utterly immersive score. The Band's Visit evokes a feeling even more than it tells a story; it grants permission to feel heartache, to feel human.

The nocturnal soundscape conjured by Jamshied Sharifi's orchestrations is fragile and romantic, with musical motifs evanescing then recurring, persistent tendrils of emotion interpolated through multiple songs.

Yazbek's compositions weave elements of traditional Arabic music and frolicsome klezmer together with invocations of a romanticized silver screen Middle East. When Dina (Janet Dacal) —a café operator and de facto Israeli envoy to the accidental interlopers— sings her moviegoing memories of "Omar Sharif," Yazbek and book writer Itamar Moses are acknowledging the presence of pop-cultural fantasy in mundane lives even as they tone down Broadway bravado to honor delicate quotidian moments on stage.

As the citizens of this desolate village open their homes, break bread and share stories with band members over the course of a single evening's wanderings, we are invited listen in on bittersweet snatches of their stories: Dina's long-ago career as a dancer, young parents' struggles with the responsibilities of adulthood, a clarinetist's hopes to become a composer, a family's loss of a mother and wife, a neurotic wallflower's crippling shyness around women.

Musician-actors in 'The Band's Visit.'

Even Tewfiq, the buttoned-up band leader (played by Sasson Gabay, who originated the role in the film from which the musical is adapted) reveals unexpected complexity with the story of a son's suicide; the script intimates that the young man, rejected by his father, was gay.

There are no hard-won truths in The Band's Visit, no morals to the story. And rather than showstoppers, the songs here are eavesdroppers, inviting us to listen in on these strangers and perhaps hear a bit of ourselves. The Band's Visit sings a funny Valentine to us all. 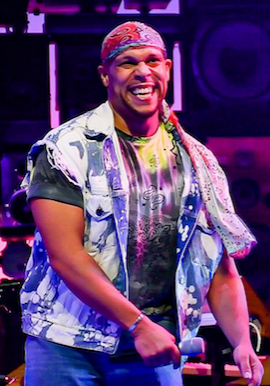 Hip hop poetry
"I always used to freestyle at my lunch table in high school," says Jay C. Ellis, a featured vocalist in the company of Freestyle Love Supreme, the improvised hip-hop poetry jam of a musical beginning its national tour at the American Conservatory Theater in San Francisco this week.

"But I went to a Jesuit private school," said the queer Toledo, Ohio native in a recent phone interview with the Bay Area Reporter. "So I was clever, but a little inhibited."

"Then in college I discovered beer," Ellis jokes. "And then marijuana! I started to make really good raps."

While attending Baldwin Wallace University Conservatory for musical theater, says Ellis, what truly enriched his rapping was a fuller embrace of his own identity as a gay Black man.

"Let me tell you something," he says, promising San Francisco audiences an ample dose of queer in his Freestyle Love Supreme performances, "I speak what I know and I speak what I love. I don't shy away from my truth in this show, and nobody has ever asked me to. Telling my own story is what I do best."

The youngest sibling of five brothers and one sister, Ellis says that his "toxic masculine rust-belt Dad" pushed them all towards athletics as children despite his personal preference for "watching Flowers in the Attic on Lifetime with my mom."

Nonetheless, it was not until an injury sidelined him from team sports as a high school sophomore that Ellis began to pursue the performing arts. Smitten with musicals since first seeing The Wizard of Oz on TV, Ellis had long sung in his church choir and made his secondary school stage debut as Old Deuteronomy in Cats.

After graduating conservatory with a degree in musical theater in 2015, Ellis moved to New York where he won several off-Broadway and touring roles over the next few years. He also met Kyle, his partner of six years, a train engineer. But in 2018, the same injury that had allowed him to chase his Broadway dream came back and bit hard.

"I had developed really bad arthritis and had to have a total knee replacement," he recalled.

Among Ellis' post-surgery pursuits was to sign up for classes at the Freestyle Love Supreme Academy, a project of Anthony Veneziale, who, along with Lin-Manuel Miranda was part of the original Off-Broadway and Broadway incarnations of the improvisational rap show.

"I went in there as a student to learn and hone a craft," Ellis said, "I aspired to be around people who were at the apex of this craft."

In relatively short order, Veneziale recognized Ellis' talents and invited him to become an instructor and a performer in the Academy's custom presentations for corporate clients. During the pandemic, Ellis continued to teach Academy students on Zoom.

This past fall, he auditioned for Thomas Kail, director of Freestyle Love Supreme on Broadway (also the director of Hamilton) and made his Broadway debut as a stand-in before being selected for the national tour that begins here and runs through August 20.

"Its going to be a long time missing my man and our dog," says Ellis. "But we'll make time to see each other at points when there are short breaks in the tour. And Kyle is coming out for the San Francisco opening. We only have a queen-size bed at home, so I'm looking forward to that hotel king."