'The Woman in Black' at The Strand 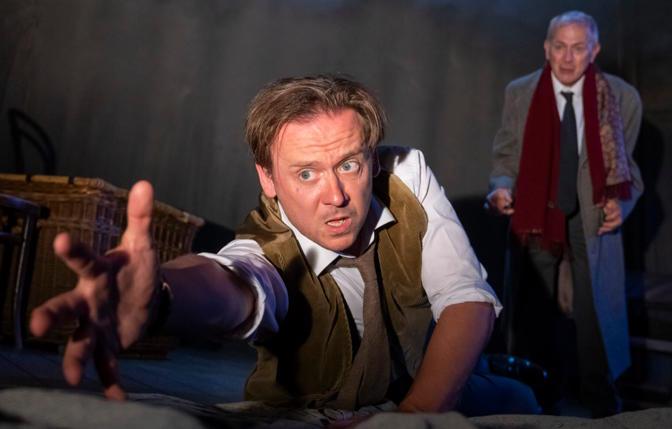 Antony Eden (front) and in Robin Herford in 'The Woman in Black'
(Source: Tristram Kenton)

The Woman In Black, a ghost story, is now on stage at A.C.T.'s Strand Theater.
My review: Boo! And I'm sticking to it like ectoplasm on a bed sheet.

Undoubtedly, I'll be cursed by tens of thousands of goosebump-loving audience members who have made this play a huge hit in London —where it's run continuously on the West End since 1989— and in subsequent productions worldwide.

This is a play for haunted house afficionados, a jump scare jamboree. If you're happily rattled when the darkness is riven by lightning bolts or a tense stretch of silence is pierced by a scream, the deliciously sinister stagecraft of designers Anshuman Bhatia (lighting), Michael Holt (set) and Sebastian Frost (sound) will tickle your spooky bone. And the two-man British cast of Anthony Eden and Robin Herford brings an inarguably impressive balance of playfulness and conviction to their performances.

Let me be clear: I'm no fan of entertainments that require suspension of disbelief in the supernatural. Debunking is more my style. If a latex mask is ultimately peeled away to reveal a scamming gaslighter behind the ghouls (and perhaps a big pile of Scooby snacks), I'm all in.

I'll even grumblingly accept the paranormal in a parable (Available down the street from the Strand in A Christmas Carol, at the Golden Gate Theatre, through Sunday). But when the plot's outcome doesn't discount the existence of visitors from the afterlife, I feel like I'm the one who's been gas-lit.

For more than half of its length, Stephen Mallatratt's script (adapted from a novel by Susan Hill) allows Eden to play a sensibly skeptical fellow. He's a Victorian-era estate lawyer investigating the affairs of a recently deceased client, the grand dame of a dreary heathside town called Crythin Gifford, whose citizenry lives in a fog of morose anxiety given their belief in the titular phantom and her curse: If you're present at one of her occasional appearances, you will later witness the accidental death of a child.

In fact, the villagers' glumness and nerves come off as anything but uniform, thanks to a terrifically dexterous performance by Herford, who plays the roles of every townsperson. His naturally tall and skeletal Ichabody slumps, jitters and cranes to bring distinct personalities to characters from a fey pub waiter to a stiff-collared public servant to a carriage driver scared to spasticity.

Alas, the advocate's investigations of the crumbling mansion that looms over the town don't lead him to discover any trickery afoot. He encounters the woman in black for himself —Eden admirably seeming as genuinely startled as the audience every time she pops up— and is quickly convinced that she's real.

The evil ghost was indeed an evil ghost. Yawn. And oh yes, without getting into the details of the distracting meta-narrative huggermugger of the play's opening minutes, let it be known that at evening's end, we're assured that the evil ghost still walks among us. In fact, we've just seen her. Which means that upon stepping out of the Strand and into mid-Market Street's hellscape, the true believers among us can look forward to seeing a kid get killed.