Poetic points of perplexion: 'Plot Points in Our Sexual Development' at NCTC 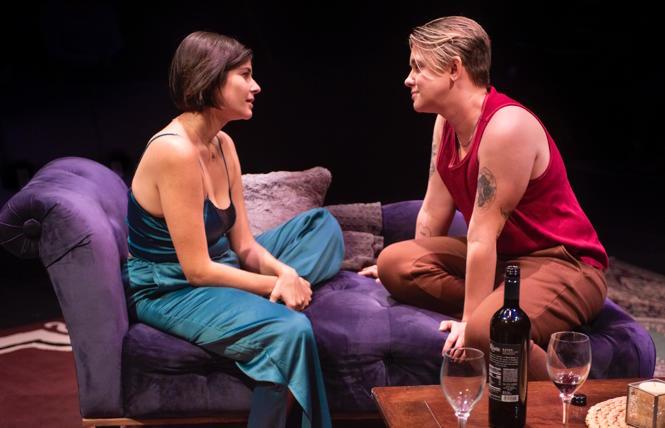 Rarely has a play about gender identity and sexual orientation felt so disorienting. Writer Miranda Rose Hall's Plot Points in Our Sexual Development, now making its regional debut in a polished production at the New Conservatory Theatre Company, is a superficially familiar hour-long relationship drama with a surprising grenade toss of an ending.

These are the kind of 'autobiographical greatest hits' narratives that each of us has a small storehouse of, and it's a credit to both Hall —whose unornamented language throbs with underlying poetry— the actors, and director Leigh Rondon-Davis that they land in a believably engaging sweet spot between casual conversation and over-polished performance. 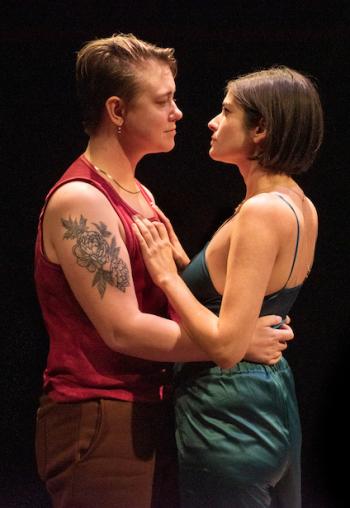 We eventually learn that Cecily and Theo are trading their backstories as a therapeutic exercise to work through an impasse in their relationship.

But as the characters' friction is finally revealed and the monologues shift to dialogue, it's a bit hard to believe that these stories —and their emotional residue— wouldn't have been shared earlier in the pair's acquaintance (The script doesn't tell us just how long they've been a couple. Are we three dates in here? Or a year down the road?).

Carlos Aceves' handsome, in-the-round set design doesn't discourage this blur. With its inviting upholstered daybed, oriental rugs and dark walls hung with shadowboxed bric-a-brac, we could easily be in a psychotherapist's office, but the program describes the space as Theo's Apartment.

The very specific conflict at hand turns out to concern the physical details of Cecily and Theo's lovemaking. Cecily does not want to feel violated. Theo, who still has a physical vagina, wants to "actualize" his deep-seated psychic "boner" with a synthetic stand-in.

The queer community has long argued that sex can just be sex, that our broader identities aren't inherently tied to the mechanics of our lovemaking. But playwright Hall points out interpersonal complications that accompany societal progress. She offers no resolution, but leaves audiences with a provocative question: Is it possible to uncouple penetration from patriarchy?