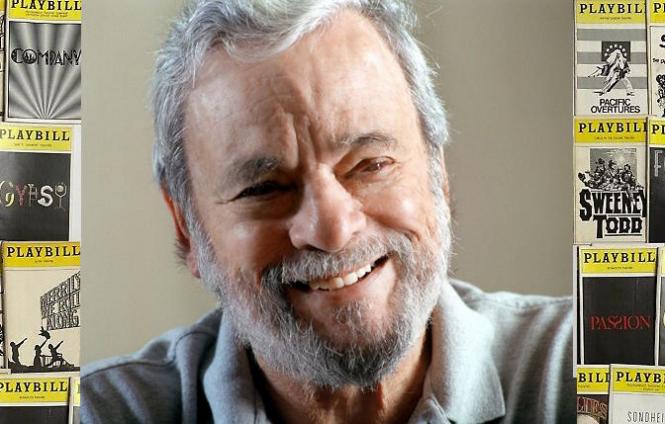 Stephen Sondheim, the legendary American musical theater composer-lyricist and with the possible exception of Cole Porter, the greatest gay American lyricist, died suddenly November 26 at the age of 91.

It is no exaggeration to say he reinvented the Broadway musical and became the quintessential musical dramatist of our age, a genius proficient at both words and scores. He was the most influential composer-lyricist of the second half of the 20th century, but only in this century has his brilliance been appreciated and celebrated.

At his death there is a new off-Broadway revival of his musical Assassins (1990, portraying a group of historical figures who attempted successfully or not, to shoot U.S. Presidents) and opening on December 9, a reimagined Broadway revival of 1970's Company (with a woman playing the traditional male lead, which debuted in London 2019). The Steven Spielberg-Tony Kushner film adaptation of the classic West Side Story (1961) will be released on December 10. 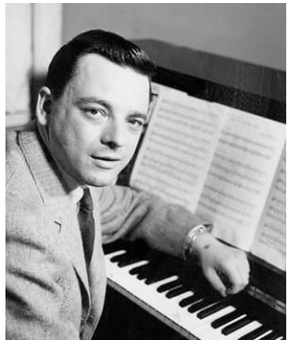 Stephen Sondheim in the early 1960s

Recently Sondheim had praised the film's imaginativeness. And next May, New York City Center as part of its Encores! program, is planning a relaunch of Into the Woods (1987, showcasing dark interpretations of several Brothers Grimm fairy tales).

Last year, to commemorate Sondheim's 90th birthday, a virtual concert, Take Me to the World, was streamed on YouTube, featuring Broadway stars singing his songs. He remained busy until his final hours, even conducting his last interview with the New York Times just four days before his death, noting how lucky he had been throughout his career. He claimed to be writing a new musical, Square One, adapted from two movies directed by Luis Bunuel.

Let me entertain you
His original most successful works, aside from the ones mentioned above, were: Gypsy (1959, but only as lyricist, presenting the advent of striptease artist Gypsy Rose Lee and her mother Rose who pushed her into show business); A Funny Thing Happened on the Way to the Forum (1962, his only comedy and longest running show, concerning a bawdy ancient Roman tale of a slave attempting to win his freedom by helping his master romance a girl); Follies (1971, about two couples who performed in a music revue in between the two World Wars, reuniting forty years later).

A Little Night Music (1973) was based on the 1955 Ingmar Bergman film Smiles of a Summer Night, on the romantic lives of several couples, especially Desiree Armfeldt, an aging actress trying to rekindle an old suitor.

Other works include Pacific Overtures (1976, about 19th-century Japan's westernization in 1853 after American ships opened it to the world); Sweeney Todd (1979, featuring a 19th-century London barber, who as revenge, murders his customers and the crazy shopkeeper who baked their grinded body parts into her successful "meat" pies). 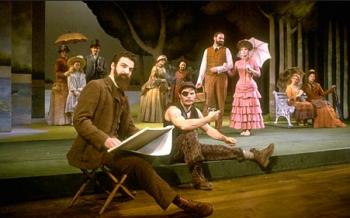 Sunday in the Park with George (1984) explored how 19th-century French painter Georges Seurat developed his masterpiece 'A Sunday Afternoon on the Island of La Grande Jatte'), and Passion (1994) was about an epileptic woman who falls obsessively in love with a young soldier having an affair with a married woman in 19th-century Italy.

Sondheim considered his songs as short dramas set to music, labeling himself more a playwright than a songwriter, which was why actors loved to perform his work. The intricately crafted songs were character-driven, literate lyrics expressing emotional ambivalence or discord.

Unlike traditional Broadway musicals with popular tunes in a threadbare often hackneyed plot, his lyrics provided insight into the psychological complexity of the protagonists. He was the maestro of melancholy and wistfulness. His verbal agility gave him staggering versatility as to the breadth of songs he composed, not to mention his elaborate rhymes. His serious subject matter stretched what was then deemed suitable material for a musical.

When one attended a Sondheim musical, you wouldn't be coming home humming a tune like "My Favorite Things." He wrote only one hit song to make the Billboard charts, "Send in the Clowns" (from A Little Night Music), which won a 1975 Grammy as Song of the Year based on singer Judy Collins' recording. His song "Sooner or Later" in the film Dick Tracy won him an Academy Award. 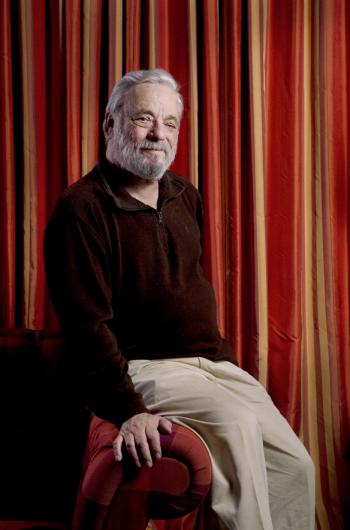 His musicals, while often critically praised, in their original runs rarely made any money or ran for very long. Sondheim musicals never had happy endings or could be described as feel-good, but were often grim in their outlook. The mid-1980s Andrew Lloyd Webber and French spectacle-driven opus (i.e. Phantom of the Opera, Les Miserables) invasion overshadowed Sondheim's accomplishments, effectively ending his Golden Age (1970-1987). He was never in sync with the times and often critiqued social mores, but artistry, not popularity, was always his goal.

Halfway through the woods
Born in 1930, through his mother, as a teen, he met the preeminent lyricist Oscar Hammerstein II, who was his greatest professional mentor, but also served as a surrogate father after his parents divorced when he was ten. Recognizing a prodigy, Hammerstein assigned him writing exercises and allowed Sondheim to watch him originating some outstanding Broadway musicals with his composer partner Richard Rodgers (later teaming up unhappily with Sondheim in 1962 to create the failure Do I Hear a Waltz?).

Hammerstein encouraged him to work as lyricist along with librettist Arthur Laurents, composer Leonard Bernstein, director/choreographer Jerome Robbins, in their modern Puerto Rican/Irish gang variation of Romeo and Juliet, in the form of the doomed love affair between Maria and Tony, in West Side Story. 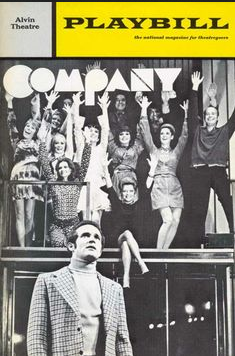 All these participants, along with the star Larry Kert, were gay and their collective virtuosity created a groundbreaking show. Sondheim later commented they were the only openly gay men he had met up until that time. The same team (Jule Styne replacing Bernstein) would generate another hit musical Gypsy two years later, only with Ethel Merman as the star in her peak performance as Rose (who in real life was allegedly a lesbian).

However, it was Company (1970), with its depiction of modern marriage/relationships and openness about sexuality, that became Sondheim's landmark achievement. The plot centered on 35-year-old Bobby and his brief affairs with women, but whose attraction lay with married couples, suggesting a ménage-a-trois. Many commentators thought Bobby was a closeted gay or bisexual, a notion vigorously denied by Sondheim.

D. A. Pennebaker's renowned 1970 documentary on the making of the original cast album, which has just been released on Blu-ray by Criterion, reveals Sondheim's perfectionism that pushed the actors to their limits, especially Elaine Stritch, who fought exhaustion to record her iconic rendition of "The Ladies Who Lunch," and is well worth watching (as is Audra McDonald, Meryl Streep and Christine Baransky's YouTube version as part of last year's Take Me to the World). Although demanding, he loved to collaborate and he reached his artistic peak with straight directors Hal Prince and James Lapine.

Witty and gay
Sondheim's coming to terms with his sexuality was a decades-long rather torturous process. His emotionally unbalanced mother was called Foxy. Just before major heart surgery in the early 1970s, knowing he was gay, she wrote a letter to Sondheim saying, "The only regret I have in life is giving you birth," despite him having financially supported her for decades.

He disclosed to a confidante at age 19 that he was attracted to men. But his close friend Arthur Laurents in his memoir Original Story wrote that Sondheim in the 1950s and '60s was frightened of his sexuality and at one point even contemplated marriage to actress Lee Remick. From a Freudian perspective, perhaps he sublimated his (closeted) sexuality into his creative oeuvre. 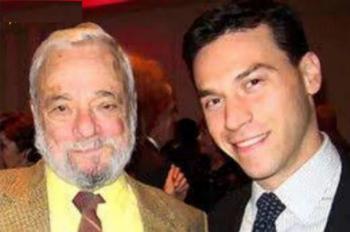 Sondheim confessed he was a late bloomer sexually and didn't have his first serious boyfriend till age forty-one and his first live-in partner until age sixty-one with Peter Jones, a man thirty years younger. It was this love affair that inspired Sondheim to write Passions (1994) featuring his most romantic score. It was his last great musical.

Sondheim formally came out publicly at age 68 to Meryl Secrest in her 1998 biography of him. It's only been in the last decade that he embraced his gay identity, such that in 2013 he was willing to rewrite the lyrics for the Roundabout Theatre Company's production of Company as a gay version, though they decided not to perform it. In 2004 he started a new relationship with actor Jeff Romley, fifty years his junior. They married in 2017.

Finishing the hat
Sondheim might be the most lauded composer/lyricist ever. He won five Tony Awards for best musical, six for original score, and three more for revivals of his shows. His Sunday in the Park (generally appraised his greatest musical, though some argue for Sweeney Todd) was given the 1985 Pulitzer Prize for drama. He received both the 1993 Kennedy Center and 2008 Tony Award for lifetime achievement. President Obama awarded him the Presidential Medal of Freedom in 2015. And in 2010 the ultimate accolade, a Broadway theater was renamed in his honor.

On November 28, more than a hundred performers gathered in Times Square to sing "Sunday," from Sunday in the Park With George.

But one suspects Sondheim would have been most pleased by the tribute given him at Marie's Crisis Café, a primarily gay piano bar in Greenwich Village with a passion for show tune music featuring musical theater performers.

On Friday night, fans gathered there to process and mourn his passing by celebrating his life and work. For five hours only Sondheim tunes were played. At Friday's Assassins revival and Company Broadway previews, announcements were made to the audiences about Sondheim's death, commenting what a sad day it was for the American theater and dedicating those evening performances to him.

Like his character Carlotta Campion in Follies bellowing out her famous survival anthem "I'm Still Here" (and National Theatre's Tracie Bennett's interpretation at the Olivier Awards on YouTube is a must-see), Sondheim lived long enough to journey from cultural curiosity to cultural icon.

In perhaps the best summation of Sondheim's legacy, Boston gay voice teacher and music director Eric Anderson, visiting New York for the Thanksgiving holiday, got a last-minute ticket for Company, and in a New York Times article remarked, "Our industry and our art form owes everything to him. I teach him to all my students. He is the history of American musical theater in one person."