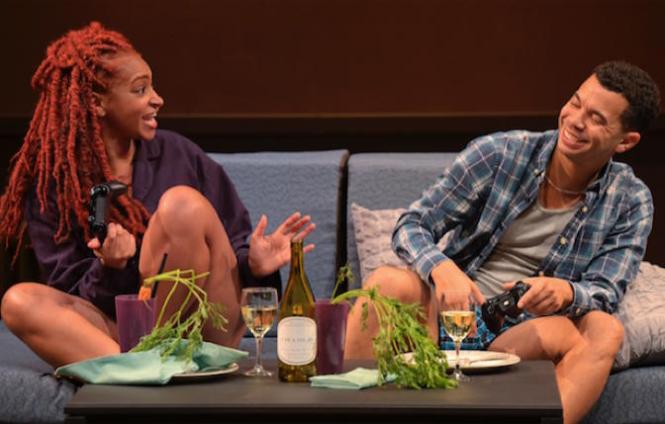 Want to show how passionate you are about supporting our Bay Area theater companies as curtains finally begin to rise again? Give tickets as holiday gifts. Make end-of-year donations if you can afford them. And by all means, binge on local productions.

On the latter front, consider heading over to 2000 block of Berkeley's Addison Street on an upcoming Saturday or Sunday. With tickets to a matinee and an evening performance, you can pack two bracingly creative explorations of family and romance into a single marathon day of intellectual and emotional stimulation.

Berkeley Rep is mounting a giddily kinetic production of Wintertime, Charles Mee's comic take on a home-for-the-holidays extended family gathering. And the Aurora Theatre offers the world premiere of Kait Kerrigan's Father/Daughter, an intimate, intricate two-hander about the unconscious enmeshment of parents and children.

Individually, these shows are well worth your time. Together they provide an exhilarating demonstration of how radically different playwriting and performance styles can be applied to related subject matter. 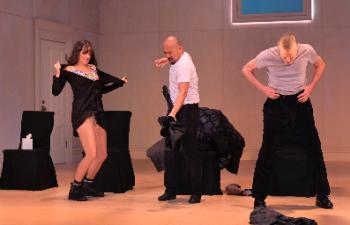 Spectacularity
In Wintertime, everything is big. From the crackerjack ten-player cast (across-the-board excellent, with a stand-out turn by Thomas J. Ryan as an incorrigible French ladies' man); to the enormous, gleaming white set (Annie Smart); to the farcical slamming doors; to the impromptu underwear dance party; to the noisy Nile of tears one character cries for minutes on end as others react with amusingly cartoonish eye rolls. The apparent chaos is deftly controlled by director Les Waters.

In his trademark style, playwright Mee navigates the interpersonal affairs of a contemporary American family (the young adult son of split-and-repartnered parents is planning to propose to his girlfriend) not by taking a sober, focused domestic drama route but by rendering the situation as operatic spectacle. Imagine a Jonathan Franzen novel reimagined as a Superbowl halftime show.

Where another writer —like Kait Kerrigan, down the block— might zoom in on the nuanced details of these characters' relationships, meticulously untangling their psychological knots and moral contradictions, Mee pulls way back and lets us watch the recursive folly of human behavior from afar. The distance reveals eternal comedy more than acute angst.

"Get over your cheap self!" this show rails. "Celebrate life and all its petty confetti!" 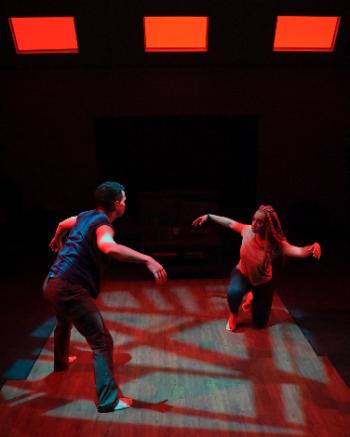 Family affair
Father/Daughter, on the other hand, endorses deep excavation of the inner self. Like Wintertime, it deals with models of romance set for children by their parents (Wintertime begins with a planned proposal, Father/Daughter moves inexorably toward one), but it does so in tight docudrama close-ups, pulsing with emotion.

All four of these characters are appealing and lovable (both women are played by Sam Jackson; the men by William Thomas Hodgson), but gradually, it becomes clear that Miranda has unknowingly adapted some of her father's most problematic character traits even as she harshly criticizes Baldwin for them.

Scene-by-scene playwright Kerrigan invites us to be emotional eavesdroppers, sneaking us into these couples' living rooms and bedrooms with our antennae tuned to private jokes, pillow talk and quietly forming fissures in their relationships. The lines are crisp, insightful and often funny. But the relationships are not as easy to compare and contrast as they should be.

Especially in some of the earlier scenes, when we haven't yet spent much time with each of the four characters, director M. Graham Smith doesn't provide crisp enough transitions and clear enough cues about which pair we're watching.

Audience members will sort it out quickly enough, but even seconds of uncertainty create a serious distraction, momentarily turning the play into a puzzle. Some instantly identifiable costume elements (Why do all four characters go through most of the show barefooted?) or consistently executed lighting changes (distinctly tinted filters associated with each couple, perhaps?) would provide significant improvement.

And then there's this: Sam Jackson is an incredibly charismatic performer who I look forward to seeing whenever she appears on area stages. She has a compelling magnetism that transcends her individual roles. Frankly, its star power. And frankly, that may not be a quality that's suited to playing two roles in the same play.

Curtains up, and out: Theater through the decades
Sign up!