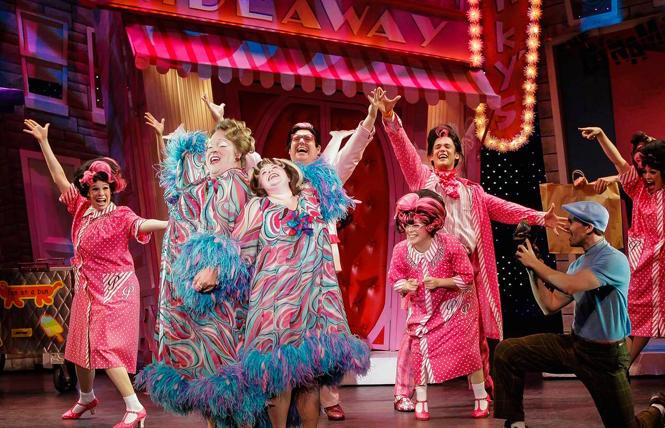 The touring production of 'Hairspray'

Hairspray, the Tony Award-winning musical, will perform November 23-28 at San Jose's Center For the Performing Arts.

RuPaul's Drag Race star Nina West heads the cast as Edna Turnblad, the role played by John Travolta in the 2007 musical film adaptation of the show, and by the legendary Divine in John Waters' original screen outing back in 1988.

Also featured in the current cast is Toneisha Harris of The Voice as Motormouth Maybelle, Billy Dawson as Corny Collins, and Niki Metcalf as Tracy Turnblad.

Hairspray is Waters' most accessible film. Most of the "trash auteur's" output had been risqué fare with cult followings prior to 1988. Hairspray was PG-rated, and appealed to mainstream audiences. It tells the story of Tracy Turnblad, a plus-size teen in 1962 Baltimore who pursues stardom on a local TV dance show while rallying against racial segregation on that same show.

In 2002, Waters' film was adapted into a Broadway musical which ran for 2,642 performances and won eight Tony Awards, including Best Musical. The 2007 film of the musical starring Travolta was a huge hit, ensuring that Hairspray would remain a successful franchise for many years to come. The current tour of the show is helmed by original director Jack O'Brien and choreographer Jerry Mitchell.

West, whose real name is Andrew Levitt, first came to national prominence on season 11 of RuPaul's Drag Race, where he placed sixth and won Miss Congeniality. Levitt told the Bay Area Reporter that he auditioned for Drag Race nine times.

"I didn't give up, and they put me on," he said with a laugh. "It was the thing that turned the key and opened up a whole different world for me."

Levitt added that he loves Drag Race hostess RuPaul, who he called an "incredible businessman."

"He teaches by example," Levitt said. "He has allowed for me and many, many other people who've been on the show how to stand in his example and figure out how to best navigate our own careers. I wouldn't have this opportunity or talk to you today if it wasn't for RuPaul. He's really a generous, kind, caring person who has given a lot to his contestants and I'm grateful for it."

Levitt has a background in theater. He is from Ohio, and currently lives in Columbus. Originally, he planned to move to New York City, but after 9/11 he decided to stay in Ohio.

"Drag somehow found me in all of that," he said. "In the interim period where I was trying to save money to move to New York, I had done a couple of shows in drag and recognized that it was a way for me to create and express myself creatively, and I went on to an almost 21-year career in drag."

He describes Nina West as a comedy camp queen who has her basis in her theatrical roots, but who is also a character of community. As West, he has spent a good deal of time raising funds for causes and organizations that are important to him. 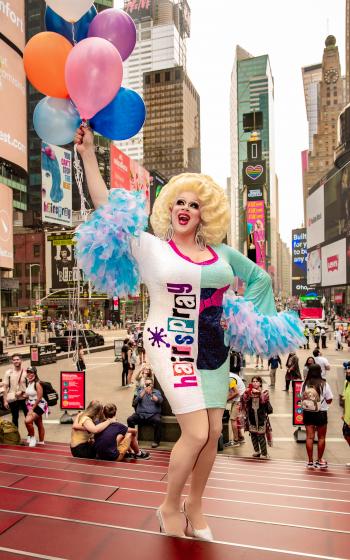 One of his favorite causes is Kaleidescope Youth Center, a center for LGBTQ youth in Columbus. He also supports The Trevor Project, SAGE, a New York City-based organization which looks after queer elders, and the Ali Forney Center, also in New York, which helps homeless LGBTQ youth.

Levitt spoke of how he views Edna Turnblad, his Hairspray character.

"Edna is this very complex multi-faceted character in this large, beautiful John Waters world," he said. "She's the mother of Tracy, is through and through a woman at her core, and she is trying to succeed at being the best mom and the best wife that she possibly can be, while also being agoraphobic to its most crippling level, unable to leave her own home to go out into the real world and experience its beauty and vibrancy. And so we get to see her in this show in a certain period of her life where she is going through a lot of change."

Hairspray is considered by some to be the only John Waters film to carry a serious message, with its cries against racism and racial segregation.

"John is providing commentary even through his own subversive lens, from things in the world that are probably more serious than we may be willing to look at," Levitt said.

"Hairspray is so applicable to today. The story is resonating today, how it is today. I would say that Hairspray is more relevant today because we're all willing to have a conversation. These issues have been deep-seated in our nation for a very long time."

But, he points out, in addition to raising serious issues, Hairspray is a lot of fun. He refers to the show as "bubble gum technicolor."

He hopes that people will see the show's message.

Hairspray runs Nov. 23-28, at the Center for the Performing Arts, 255 Almaden Blvd., San Jose. $38-$98. broadwaysanjose.com Proof of vaccination and masks are required in order to see shows at the San Jose Center.

The stage's broad reach: 'The Absolute Brightness of Leonard Pelkey' at Cinnabar Theater
Sign up!