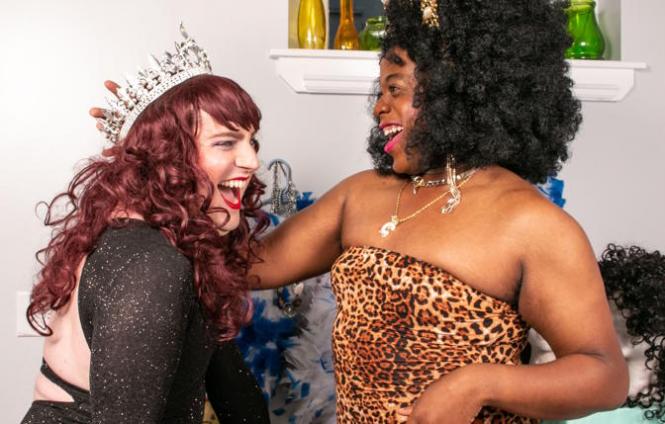 Just a day after Bob the Drag Queen, GottMik and a handful of other celebrity lip syncers put on a slick Halloween extravaganza at the Warfield last week, I had a phone conversation with Terry Guest, the Chicago-based playwright of At The Wake of a Dead Drag Queen, being presented by Theatre Rhinoceros through November 14.

"Different people have different reasons for doing drag," Guest remarked. "Today, there are lots of people who get started because they want to get on RuPaul's Drag Race. But that wasn't at all the case for my uncle. Drag was simply a way for him to express himself in a way he couldn't otherwise."

Guest's uncle Anthony —who is the central character in Wake and whose stage name was Courtney Berringers (note the lack of kitschy puns)— did drag shows every weekend in Albany, Georgia, a small flood-prone city three hours south of Atlanta whose largest employers include a Miller Brewing factory and a customer service telephone hub.

"This was small town drag from the 1990s to 2005," explains Guest. "You weren't trying to sell anything, or to get on TV. You were just doing it to be you. There are no tourists coming to town to see the show. These are very poor people living close to the bone. You're playing for the same people this week as last week. You're doing it for yourself as much as for anyone else."

In the Rhino production, directed by Tanikaa Baptiste, Anthony/Courtney is played by company veteran Devin Cunningham and his partner Hunter/Vickie is played by Mario Mazzeti, who this critic praised as "genderbendingly brilliant" in Custom Made Theatre's 2019 production of Cloud 9. 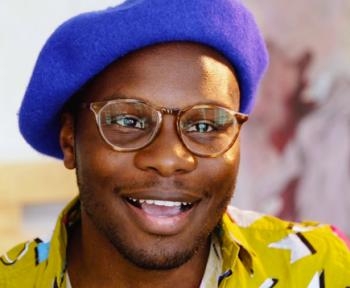 Guest was 15 and just beginning to begin exploring his own homosexuality when his uncle came out to him about a year prior to dying of AIDS. "I didn't have any concept of what being gay or queer meant," Guest recalls. While neither Guest or his uncle articulated the younger man's queerness at the time, the playwright recalls that "He became a really important figure in my life when he died. It haunted my growth, sexually."

It's less of a haunt and more of a hoot when post-mortem Anthony/Courtney addresses audiences from beyond the grave in Wake, which, while bittersweet at times, is largely a laugh-out-loud celebration of overlooked lives that are due reconsideration. Anthony died in the 1990s, but Wake arrives in the era of Woke.

"A lot of the play is me trying to fill in the mysteries of my uncle's life," says Guest. "I knew him very well as a kid, but I didn't see him in drag. We didn't talk about his relationships. I have some letters that he left to me, but I didn't do much research beyond talking to my mom and my grandmother. But you know, even when I write about my life, it's sometimes hard to be sure what's real and what's imagined. Do I really remember that scene from my childhood, or is it because my mother told me a story about it or showed me a photo of it?"

In its humor, celebration of African-American traditions, and respect for small town southern lives, Guest feels that in Wake he's infused his uncle's life with joy and perspective that may not have been accessible to Anthony in the 1990s.

"But I feel very connected," says Guests. "Maybe he has found a way to speak through me."

Among the intriguing questions raised by the momentous social changes that have passed between the period of the events portrayed in Wake and today is whether, were he alive in the present day, the real-life Anthony/Courtney might have considered themself trans or nonbinary rather than a drag queen.

"This is impossible to know," says playwright Guest, "I mean the word 'trans' existed in 2005, but not with the context it has now. My uncle always used 'he' pronouns except on stage, but my mother has even asked me if I think he would have chosen to live his life as a woman if that had felt like a possibility."