Queen O'Ween at the Warfield 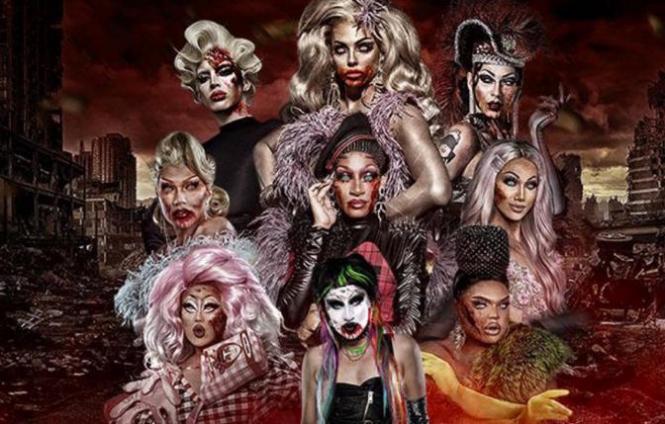 The queens of 'Night of the Living Drag'

When Ross McCorkle was growing up in Scotland, he was "obsessed with witches. I was a stunning little witch."

And while the present-day New Yorker (He moved to the U.S. at age 10) largely traded witchery for bitchery in developing his drag persona Rosé, featured in the 13th season of RuPaul's Drag Race, he still finds himself caught up in the spell of the spooky season.

The wien may be tucked, but the 'ween is still worshipped.

"Halloween costumes are absolutely a form of drag," McCorkle/Rosé wrote in response to questions from the Bay Area Reporter about their upcoming appearance —along with seven other RPDR vets— in Night of the Living Drag , a pumpkin month performance tour that makes its San Francisco stop at the Warfield Theater next Monday night at 8 p.m.

"I loved dressing up for Halloween as a kid for the same reasons I love dressing up today," they explained. "To make lots and lots of money. Just kidding. There is an invincibility that comes with dressing up, either fantastically or just as something completely different than what you normally are."

And there's no doubt about Rosé's most memorable Halloween costume.

"It was my sophomore year of college, and it was the first time I ever did full drag. One of my theater professors saw a picture the following week and said, 'You know, you could really consider making this a part of your career.' I scoffed and laughed because, well, that would be ridiculous!"

Despite the fact that wearing make-up and costumes is now an essential part of making a living, Rosé would never skip getting specially dolled up for All Hallow's Eve.

"It's actually a duty to go even harder on Halloween. If everyone is dressed up, the queens need to be looking absolutely wild."

Rosé and Aquaria in 'Night of the Living Drag'

"I absolutely love Halloween for the costumes," agrees Rosé's co-star Aquaria. But while famous for her Season 10 zinger, "Any hole is a goal," Aquaria has sewn shut the orifice of the goody bag she carried as young Giovanni Palandrani, who grew up trick-or-treating in the Philadelphia suburbs.

"I really don't have much of a sweet tooth anymore," notes the rail-thin sometime-model, "but my favorite candies growing up were Skittles, Reese's and Butterfingers. I still do have a sneaky midnight snack every once in a while." Butterfingers, one imagines.

While another touring queen, San Francisco favorite Kim Chi, notes that her only real phobia is "fascism," the show's overall conceit focuses on typically ooky, spooky holiday scares, with cobwebs, skeletons and zombies figuring into the onstage décor and couture. The loose thematic plot features host Violet Chachki recounting fantasies of her colleagues' premature demises, which are then enacted on stage with plenty of wardrobe, music and dance.

Meeting their bitter ends along with Rosé, Aquaria and Kim Chi will be Alyssa Edwards, Jaida Essence Hall, GottMilk, Kandy Muse and Plastique. Death drop, anyone?