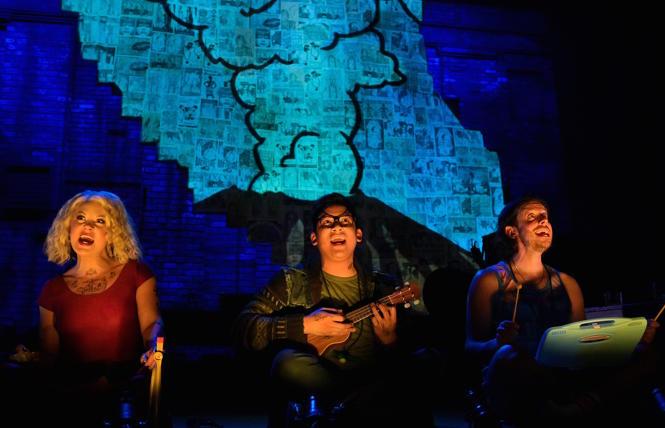 Justin Huertas brings all of the above to the table, not to mention his queerness and Filipino heritage. He has written that his mission "is to create hero stories that put Black and Brown people, queer people, and women and non-binary/gender non-conforming folks at the center of the narrative."

Huertas, 33, wrote the lyrics, composed the music and is one third of the cast in Lizard Boy, his cheeky-but-sincere superhero/sci-fi musical which opened its debut Bay Area engagement at TheatreWorks Silicon Valley in Mountain View October 6.

The show, in which the actors perform their own instrumental accompaniment on stage, and crack wise about everything from Grindr to Yoda, has demonstrated broad appeal in two enormously successful prior runs: In 2015, Lizard Boy debuted in Huertas' hometown at the high-profile mainstream Seattle Rep. It was remounted the next year at San Diego's Diversionary Theatre, which specifically programs for queer audiences. 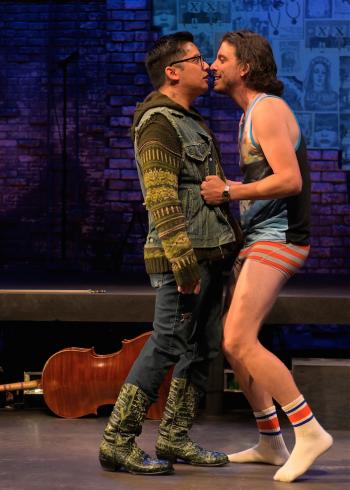 Lizard Boy is a fable-like tale about Trevor, a young man who feels like a permanent social outsider due to his scaly green complexion, the result of a childhood freak accident. While gay audiences will hardly be surprised when the protagonist's perceived defect evolves into his unique superpower, this metaphorical tale about becoming comfortable in one's own skin will delight them nonetheless, thanks to inventive staging, sharp humor and Huertas' folk-pop music, which surprisingly succeeds in blending echoes of Jonathan Larsen, Lin-Manuel Miranda, Indigo Girls and Barenaked Ladies.

While Lizard Boy, the superhero, has a fantastic origin story, the origins of Lizard Boy the musical are almost as hard to believe. An accomplished cellist in his childhood, Huertas went to Pacific Lutheran College to pursue his study of the instrument, but —to his parents' chagrin— he dropped out of that major and switched to acting. Upon graduation, he swiftly won a role at the Seattle Rep, under the direction of Jerry Manning, then also the company's artistic director (Manning died in 2014).

A few days before opening night of his Rep debut, Huertas was dumped by his boyfriend.

"I was just a wreck. Everyone could see," he recalled in an interview with the Bay Area Reporter. "After rehearsal, Jerry took me out for a whiskey."

A friendship and mentorship began.

Huertas, still a novice, didn't have steady acting work; in the gaps between shows one of his money-making jobs was playing cello gigs. Manning, who had no idea that Huertas was a talented musician, coincidentally happened to attend an event where his young friend was playing.

Huertas was soon summoned to Manning's office at the rep.

Drawing on some old journal entries, Huertas began to develop an autobiographically-fueled comic book-style story, about a boy "who always felt like he was the ugliest person in the room" and became a superhero.

In another serendipitous coincidence, it turned out that Manning was also a huge comics fan. "He had the first 100 issues of The Fantastic Four," Huertas still marvels.

Manning oversaw the first, rough 45-minute version of Lizard Boy before handing the reins to Brandon Ivie, who then worked with Huertas to build out the show, along with his cast-mate collaborators Kirsten "Kiki" de Lohr Helland and William Williams.

At TheatreWorks, six years after Lizard Boy premiered, the show's first and only cast will again play the roles they originated. In part, this is due to the fact that Huertas has never committed his songs to sheet music.

"We've been playing this show together since the beginning and we've been making the orchestrations more complex as we've gone along. I can't imagine what it would be like for an understudy trying to come in. My big dream for Lizard Boy," says Huertas, who is working on that sheet music, "is that sometime in the near future, high school and college students everywhere will have a chance to play these parts."

There's certainly a demand. The Lizard Boy cast recording has built an avid online fandom of young listeners who, for the most part, have never seen the show.

"The people who have found Lizard Boy through streaming are amazing," says Huertas. "They send me the most moving notes and even art inspired by the show."

Despite an ongoing love affair with his reptilian alter-ego, Huestas is hardly resting on his lizard laurels. He's had two more original musicals commissioned and produced in Seattle, The Last World Octopus Wrestling Champion and Lydia and the Troll; written the songs for a stage adaptation of Howl's Moving Castle; and is currently under commission to collaborate on a children's musical at the John F. Kennedy Center for the Performing Arts.

Sign My Name to Freedom
The East Bay's Betty Reid Soskin, the oldest active ranger in the U.S. National Park Service, turned 100 last month. Over the past decade, Soskin, has been the subject of much public attention for the talks she's given at the Rosie the Riveter/World War II Home Front National Park in Richmond.

She also won new attention for the experience of African-American women and men during the war, who served the country here and abroad at the same time they were subject to institutionalized segregation, discrimination and other forms of racism. 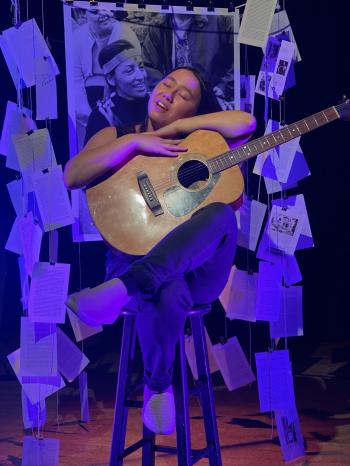 Lesser known though, is Soskin's lifelong interest in music. In the late 1940s, with her first husband, Mel Reid, she opened a record shop in Berkeley with her first husband. They sold blues and R&B and recordings then known as "race music" and not carried by most white-owned music shops. In the 1960s, while coping with raising four children amid failing marriage, she began making music herself, learning to play guitar and writing songs.

Soskin's songs have now been recovered, rearranged and made the center of a new work of musical theater, Sign My Name to Freedom, spearheaded by Jamie Zimmer, a queer Chinese-American 2020 graduate of the California Jazz Conservatory.

The work-in-development will have its first public performance Oct. 16 and 17 as part of the New Roots Theatre Festival at the Mission's Brava Theater.

The festival, produced by the San Francisco Bay Area Theatre Company (BATCO), features an array of other intriguing offerings, including an Afro-Futurist take on the myth of Phaeton and a celebration of regional Mexican dance styles.