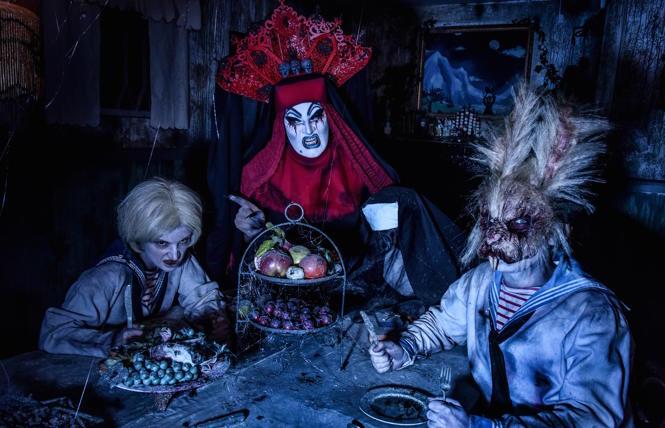 Peaches Christ (center) with some creepy characters from 'The Immortal Reckoning.'   (Source:photo: Jose A Guzman-Colon)

Beginning September 23 until October 31 the San Francisco Mint will play host to The Immortal Reckoning, a live, fully immersive haunted adventure. The event comes to San Francisco courtesy of Into the Dark, a production company which has risen from the depths of the minds of David Flower Productions, Non Plus Ultra, and Peaches Christ, the drag world's Queen of Horror.

The Immortal Reckoning combines live theater with haunted mazes and special effects. Attendees will be invited to view an exhibition of rare artifacts related to the occult and the supernatural, but then something goes terribly wrong and the gates of hell unlock. Guests will come to the realization that their guide is not what they seem to be, and The Mint quickly becomes a portal to an alternate dimension where vampires, witches, and ghosts are all too real.

Groups of up to eight at a time will be admitted, with performances starting every 15 minutes. Due to the ongoing pandemic, all patrons must show proof of vaccination before entering and masks must be worn at all times. 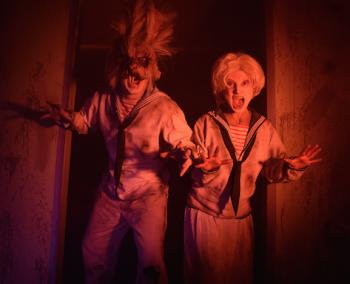 Creepy characters from 'The Immortal Reckoning.'  (Source:photo: Jose A Guzman-Colon)

In the blood
Peaches Christ, who wrote the show, spoke to Bay Area Reporter about her love of the horror genre.

"From the time I was a toddler and could be excited about anything it was always Halloween, it was always spooky stuff, it was always ghosts and monsters, that was the stuff I was naturally drawn to," she said. "I guess maybe it was in my DNA. I've always been into anything dark or spooky or macabre. I mean Halloween has always been my favorite holiday."

The drag entrepreneur said that she remains enamored of the films she grew up with in the 1970s and '80s, classics such as The Texas Chainsaw Massacre, A Nightmare on Elm Street, Poltergeist, Hitchcock's Psycho, and Night of the Living Dead, which she encourages people to rewatch.

"Because it's a horror movie with a social message," she said. "In the era of Black Lives Matter, it was so ahead of its time to have a Black male lead in a horror movie who ends up getting shot by police. I rewatched it during the pandemic and was like, oh my God, this movie is just incredible."

Christ said that her purpose in co-creating (with David Flower) The Immortal Reckoning was to create a haunted attraction that they themselves would want to go to.

"And so we sat and talked about if we were to do a horror show in San Francisco, what would it be like?" Christ said. "And we just knew that it was going to mash up our love of storytelling, immersive theater, and old school haunted houses. So it has all of that in it, but unlike a traditional haunted maze, this has a linear story."

That story involves the audience, who become characters in the show.

"The show is about a family called The Blackwells who have the world's largest collection of occult artifacts," Christ explains. "And they've been able to store them safely by renting out the San Francisco Mint building. Legend has it that some of the artifacts might be dangerous. So you as the guest are invited to this exhibit that's open to the public for the first time ever."

Christ warns that one of the artifacts opens a portal to another dimension.

"And you have to cross over and help accomplish some goals before the show is finished," she said. "So the audience is immersed into another dimension."

Some of the artifacts in the story include items from a new wave goth bar in SoMa that burned down in the '80s, and was run by vampires.

The nuns, according to Christ, worshipped a rabbit named Lord Lepus.

"They had a bastardized version of Catholicism where Jesus was a rabbit," she said. "So much in the same way I'm consistent with liking horror, I also really love sacrilege."

Monster mash
Christ noted that the show also features full male nudity and topless women. Only people aged 21 or older will be admitted.

"It's very adult, very San Francisco," she said. "It has sexuality and adult content. But additionally, we serve cocktails throughout the attraction, because we're also a bar."

As with the company's previous popular show, Terror Vault, patrons will have the choice to be either more or less interactive when they attend the show. When they enter the show, patrons will be given a red necklace. If a patron chooses to wear the necklace, it signals the cast that they give their consent to be more engaged. They might be put into a private room and locked in a coffin. They could be grabbed or touched.

Guests are invited to begin and end their journey at Fang Bang, an '80s new wave/goth vampire themed bar located in the vault of San Francisco Mint. Fang Bang will be open to the public during show operating hours. A ticket to The Immortal Reckoning is not required to visit Fang Bang, or to visit CreepShop, a pop-up retail shop co-produced by Kreepsville666. CreepShop is the show's spooky gift shop.

On October 30, guests can also attend Terror Ball, the first ever Halloween party that will take place throughout San Francisco Mint with Christ serving as hostess. Guests will be treated to live entertainment, DJs, food and drink, a costume contest, plus more surprises.

For anyone who fears that the show might be too frightening for them, Christ has a bit of advace.

"We are going to try to scare you, that's the whole point," Christ said. "Most of the people who were very nervous to go through it, I would say that 90 percent are just giggling and laughing, and yeah, they may have screamed, but they all agree that they would want to do it again, and that they had a great time. So, we're here to scare you, but we're entertainers. We're not here to torture anybody. We're show people who want to put on a great show and entertain you. So at the end of the day, that's what we're doing." 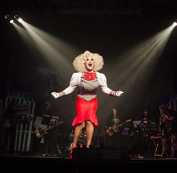