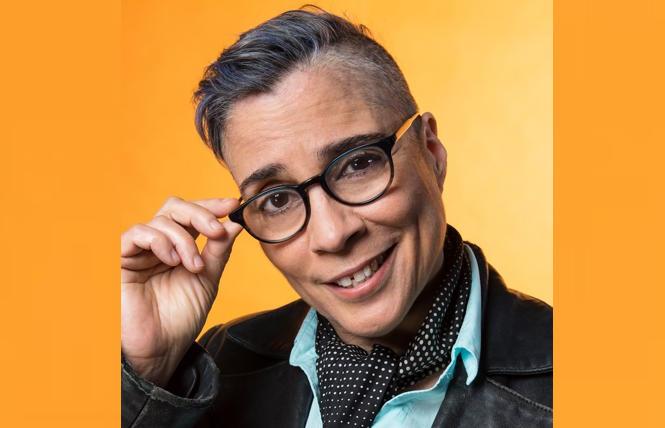 It may not be brand spanking new, but seen live on stage at The Marsh, Marga Gomez's Spanking Machine promises to feel fresh as a daisy. Marking the local icon's full-fledged return to in-person performance after 18 months spent reaching out to audiences from behind the chilly scrim of monitor glass.

Gomez developed the piece —her 13th solo show— at the Marsh and Stagewerx during 2019, but the finished work's premiere engagement was scheduled to open at the Brava Theatre in March 2020, the very week of the initial COVID shutdown. With dress rehearsals just completed, that run was postponed and relegated to Zoom, as was an engagement at New York's Dixon Place.

A game improviser thanks to years of stand-up comedy experience, Gomez took last March's postponement as an opportunity to hone her technological skills and on-camera performance technique, revising the show so she could effectively present it on her own, from the confines of her apartment.

"I geeked out watching hours of tech tutorials on YouTube," she told the Bay Area Reporter last September, before the reblocked and reconfigured production was presented live online, "My living room looks like a public access studio now. When shelter-in-place started, I invested a chunk of money into live streaming gear."

That investment paid off in more ways than one. The online iteration of Spanking Machine was well attended and critically well-received: "...Beautifully balanced between gut-busting laughs and life-altering heartbreak", wrote David John Chavez in Bay Area Plays; The SF Chronicle's Little Man was wide-eyed, applauding. And, ever the impresario, Gomez spun her new streaming skills into a side gig consulting with other performers who were uncertainly wading into the waters of online production. 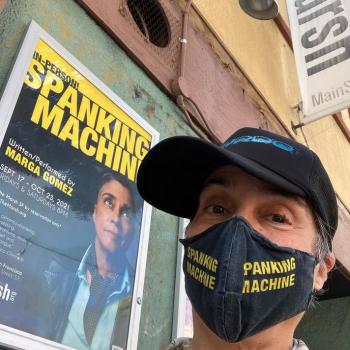 Marga Gomez at The Marsh

Still, as engaging as they were, the streamed version of Spanking Machine pointedly revealed its own short-fallings. Interspersed with Gomez' live-to-camera performance were videotaped clips of last year's final live dress rehearsal, presented for an invited audience. The attendees' laughter and murmurs of recognition captured in those snippets reminded viewers of the performer-audience feedback loop that gives live theater its unmatchable tension and energy.

And that unique frisson of mutually fueled emotion is perhaps more critical to the success of one-person shows than any other form of live performance. Even when performed for only a camera, concerts, dance performances and plays can generate some connective charge through the exchange of energy among the players themselves.

But for most solo shows, including Spanking Machine, the audience is more than audience. It is the receiver of confession, the performer's only sounding board, the relatively silent partner in what is nonetheless a dialogue.

Where multi-character plays can choose to either toy with or ignore the so-called "fourth wall," a solo show has only one wall to play with and when, instead of being a metaphor, that wall becomes the hard glass of a computer screen there's an unavoidable loss.

So, after a year and a half of necessary compromise, it should be a thrill to see Gomez make like Jim Morrison and break on through to the other side to once again grip us in the way she's always intended.

Ironically, Spanking Machine offers another dimension of post-pandemic perspective. The show —which grows a tangle of free-associative tendrils from Gomez' reunion with a childhood boyfriend, who like the performer herself eventually came out as queer— is a reflection on the relationship between pain and pleasure, punishment and release.

The titular torture device —a rumor from Gomez's Catholic school days, kinky sex, and childhood bullying— are woven into her reminiscences and to an ultimate acknowledgement of personal progress and work yet to be done.

For the past 18 months, we've all experienced a spanking machine of sorts. And for many of us its led to meditating on how best to move forward. That will surely add an extra layer of meaning to the in-person experience of Marga Gomez's latest gem.