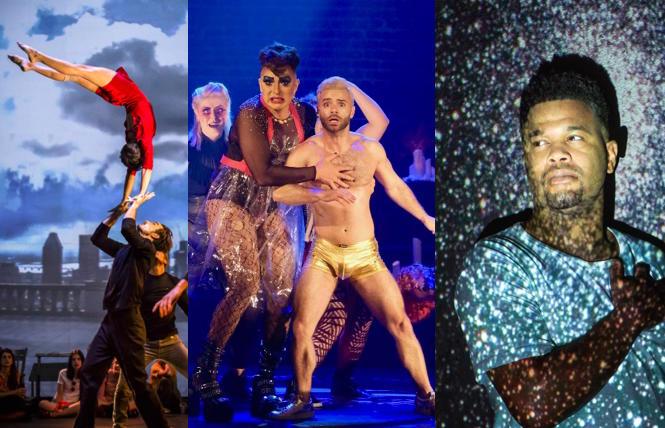 While companies continued to postpone their season openers throughout the past month, at press time the productions below are impatiently waiting in the wings, ready for their entrances. Here, listed by month, are my picks for the most intriguing shows of the fall season, along with a selection of other noteworthy productions. 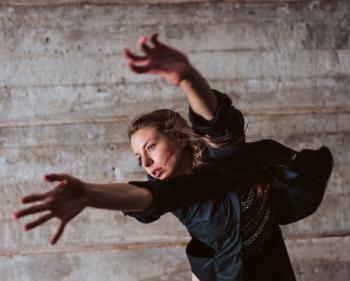 September
"The blessed gods
Purge all infection from the air
Whilst you
Do climate here."

So says King Leontes when charming prince Florizel arrives in the Sicily of The Winter's Tale. And while no mere mortal can vouch for a 100% absence of coronavirus, the fact that CalShakes performs at Orinda's lovely outdoor Bruns Amphitheater makes their new production of Shakespeare's comic romance a pretty safe bet if you still feel a bit anxious about attending your first post-pandemic performance.

The queer centerpiece of this year's multi-venue CounterPulse Festival is Split, a literally singular movement work created by Charles Slender White. Inspired, in part, by The Picture of Dorian Gray, the piece pairs each audience member with a single dancer. The live performances will be follow viewings of a thematically related portrait gallery /and video installation. Another intriguing festival entry is curbAlert's UN•REST which features drag king Lotus Boy in the cast and will be performed in an unused parking lot at the Oakland Estuary Park.
The Winter's Tale, Through September 26. www.calshakes.org
CounterPulse Festival, Sept. 9-18. www.counterpulse.org

While there are no big musicals opening in the city this month, John Lloyd Young, the original Broadway star of San Francisco favorite, Jersey Boys, brings his solo concert to Feinstein's at the Nikko on September 9 and 10.

The San Francisco Playhouse continues its two-month run of Starting Here, Starting Now, a revue of the intelligent, emotion-drenched story-songs of Richard Maltby and David Shire.

Risk is always part of circus' allure. And, in this season's biggest theatrical gamble, North Beach's Club Fugazi is undergoing a massive bespoke remodel in anticipation of a lengthy open-ended engagement for Dear San Francisco, an acrobatic and poetic celebration of the city. The creative team is led by S.F. natives Gypsy Snider and Shana Carroll, who began their careers here with The Pickle Family Circus and went on to found world renowned Montreal-based nouveau cirque The 7 Fingers. Their venue's last theatrical tenant was Beach Blanket Babylon, which played for a fleeting 45 years.
John Lloyd Young in concert. Sept. 10 and 11. www.feinsteinssf.com
Starting Here, Starting Now. Through Oct. 2. www.sfplayhouse.org
Dear San Francisco. Previews begin Sept. 22. www.clubfugazisf.com

October
Let's do the Time Warp again. Ray of Light Theatre's production of The Rocky Horror Show promises to reimagine and reanimate the cult classic, taking audience participation to a new level. An immersive, ambulatory Sleep No More-influenced take, it will wind a rocky road through a series of chamber performances at Oasis, whose proprietrix, D'Arcy Drollinger, has been cast yet again as Frank N. Furter. Hot patootie!

With tens of thousands of Afghan refugees seeking asylum, Shotgun Players' first production for in-person audiences in over a year couldn't be more timely. Tim Cowbury's The Claim, set in England, features a stark Kafkaesque scenario in which an immigrant is interviewed by state authorities. The interviewee speaks French, as does one of his two interrogators, who ends up facilitating a sort of whisper-down-the-lane between his colleague and the immigrant, who may literally end up lost in translation. It's a satirical, scary piece.
The Rocky Horror Show. October 7-31. www.rayoflighttheatre.com
The Claim. October 14-30. www.shotgunplayers.org

Harrison Rivers' Interlude was commissioned by New Conservatory Theatre Center and first produced during the pandemic as a recorded audiovisual presentation. Now, this poetic psychological portrait of a Black San Franciscan, who returns to his childhood home in Kansas during the pandemic, has been adapted for the stage. This is a delicate, intimate piece that will likely be enhanced by the collective engagement of an audience in the room. 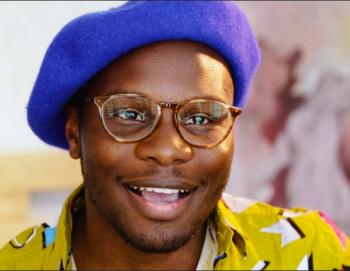 'At The Wake of a Dead Drag Queen' playwright Terry Guest

There's more queer drama on tap with Theatre Rhinoceros' At The Wake of a Dead Drag Queen. Playwright Terry Guest has written a 90-minute, two-player shoestring extravaganza that seems custom-made for a star turn by Billy Porter. It's a collage-like examination of inherited racial and sexual trauma that hopscotches its way from African ancestry to AIDS shaming to Beyoncé fandom.

Beyond Rocky Horror, this month brings another cultish resurrection as Jesus Christ Superstar takes the stage of the Golden Gate Theatre as part of a 50th anniversary tour. It's a spare, muscular rock concert iteration whose UK production won an Olivier Award for best musical revival in 2017. Still, despite a few earworms, there's more bombast than bliss in Andrew Lloyd Webber's score. I don't know how to love it.

After wrapping up its San Francisco run this weekend, the company of Hamilton heads down the peninsula for the show's first-ever San Jose engagement. Several repeat-attendees /of Hamilton say that this particular cast is not only the best that's played the Orpheum, but may even have better chemistry than the original Broadway ensemble. Simon Longnight's turn as Lafayette is a knockout.
Interlude. Oct. 8 — Nov. 7. www.nctcsf.org
At the Wake of A Dead Drag Queen. Oct. 27-Nov.14. www.therhino.org
Jesus Christ Superstar. Oct. 13 — Nov. 7. www.broadwaysf.com
Hamilton. October 12-31. www.broadwaysanjose.com

November
Berkeley Repertory had been set to reopen in September with a different play, now rescheduled, but Wintertime, by the manic magpie playwright Charles Mee, seems a wonderful way to invite us back to the theater. It's a zany, overstuffed romantic farce full of sexual zigzags, family melodrama and clever references to other works of art and literature. This is theater lovers' theater; a big, juicy welcome back kiss.

Theo, one of the lovers at the center of Plot Points in Our Sexual Development describes themself as a "genderqueer trans person who is not a woman and is not a man, but is kind of a man, who loves lesbian jokes." The other lover, Cecily, is a lesbian, not at all comfortable being the butt of any joke. Such are the complexities of love in the time of gender fluidity. Playwright Miranda Rose Hall gives her characters —and audiences— a tangled thicket of issues to work through in an effort to better understand and empathize with one another. Plan on a long conversation over drinks afterward at New Conservatory Theatre Center.

Aurora Theater returns to the live stage with another relationship play: Father/Daughter by Kait Kerrigan. This formally inventive player piece braids a pair of family stories that take place 23 years apart. In one, the actors play a divorced father and his lover. In the second, they play the divorcee's grown daughter and her lover. Audiences are challenged to ponder how a child's relationship with parents impacts that child's later romantic relationships, and vice versa.
Wintertime. Nov. 12 — Dec. 19. www.berkeleyrep.org
Plot Points in Our Sexual Development. Nov. 12-12/19. www.nctcsf.org
Father/Daughter. Nov. 12 — Dec. 12. www.auroratheatre.org

Two problematic yet beloved shows return to San Francisco stages in productions that make an effort at corrections. At the Curran, Harry Potter and The Cursed Child returns from hiatus debloated. The former two-parter has now been squooshed into a single event. While hardcore Potterphiles will surely obsess over what's been cut, I doubt anything will really be missed. The plot isn't changing, and the show will be more affordable and accessible.

My Fair Lady dances into The Orpheum with everybody's grandma close behind. But director Bartlett Sher's new staging is said to feature a modernized feminist flair, with Eliza Doolittle showing as much backbone as leg. Still, one wonders, in today's social climate, can any faithful version of Lerner and Loewe's 1956 musical spin on Shaw possibly overcome male chauvinist Pygmalion?

Marin Theatre Company springs back into action with holiday comfort fare. Georgiana and Kitty: Christmas at Pemberley is the third installment of playwrights Margot Melcon and Lauren Gunderson's romantic expansion of Pride and Prejudice. Fans of last season's MTC production of Gunderson's ferociously topical The Catastrophist will get a real sense of her versatility here. And if Harry Potter and Marvel can have their own full-blown universes, surely Jane Austen deserves one as well.
Harry Potter and The Cursed Child. Begins January 11, 2022. sf.harrypottertheplay.com
My Fair Lady. Nov. 2- 28. www.broadwaysf.com
Georgiana and Kitty: Christmas at Pemberley. Nov. 18—Dec. 19. www.marintheatre.org

December
A welcome alternative to Christmas carols (By the way, a version of Dickens' will be playing the Golden Gate), The Cassandra Sessions at Shotgun Players is a theatrical concert that renders the Trojan priestess' prophecies of the future through the songs of American folk and blues legend Malvina Reynolds, whose compositions include the Daly City-inspired "Little Boxes."

Conceived and performed by Beth Wilmurt with striking sound design by Jake Rodriguez, most details about the show are still under wraps. Even so, it's the holiday season's most intriguing theatrical gift.
The Cassandra Sessions. Dec. 2 — 19. www.shotgunplayers.org