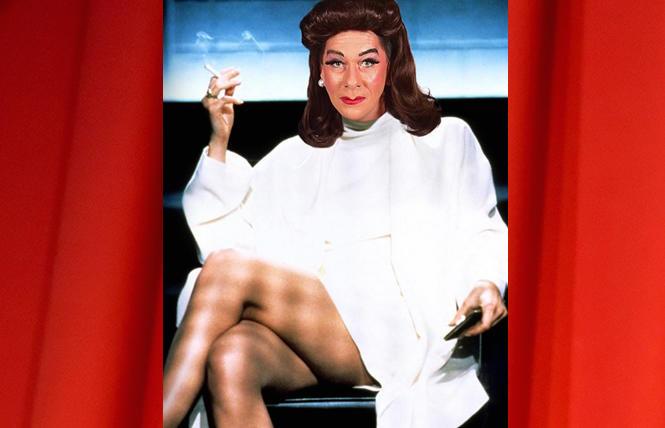 A reasonable facsimile of Joan Crawford comes to life when actor Matthew Martin takes to the stage of the now reopened Oasis in The Hand That Rocks the Crawford, a wild re-imagining of thrillers like The Hand that /Rocks the Cradle, Fatal Attraction, and Basic Instinct, all performed as though Mommie Dearest herself had starred in them.

Martin is well known for his affectionate nods to Crawford, having starred a few years back in Trog Live, a staged parody of Crawford's legendarily bad last movie. As always, Martin will play Crawford (playing Glenn Close, Sharon Stone, etc.) with tongue planted firmly in cheek, but also with the respect and reverence worthy of one of his favorite actresses.

The show is written by Martin's good friend, playwright Michael Phillis, who collaborated with Martin on Trog. The show can be seen at Oasis from July 22-August 7.

The actor has also performed in Billy Clift's filmed parody of the classic Whatever Happened to Baby Jane? Titled simply Baby Jane?, Matthew performed as another screen icon, Bette Davis. 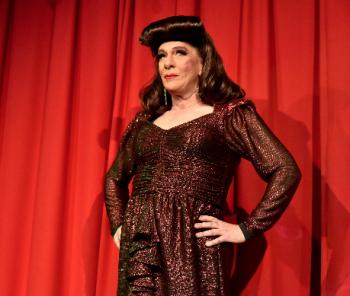 Matthew Martin in 'Trog Live' at Oasis in 2018. Photo: Gooch

"Ask a lot of the kids today about Bette Davis and Joan Crawford, and they're like, 'Bette who?' and 'Joan what?'" said Martin to the Bay Area Reporter. "So it was more relatable referencing with these movies but then putting Joan into the mix, as the villainess of all three, and it's a send-up of all three."

Martin recalls that when the cast did the first read through of the play's script, they were crying with laughter.

"Because it's so well written, and it's so ridiculously funny," Martin said. "And then you have five juggernaut talents, Michael, myself, Sara Moore, Steven LeMay and J. Conrad Frank, and they're all playing the various roles. And we're all friends, so it's like working with family."

Martin describes the show as "couture comedy," as everyone in the cast is playing roles that were written especially for them. He refers to the time we're now in as "the end of the war," an obvious reference to the end of the pandemic lockdowns.

"The troops need to be entertained," he said. "People are so deprived, and I think not only are they going to laugh, but they're also going to laugh their asses off and fall off their chairs. It's just that funny. I think it's going to go over really well. It's more than just a funny show. It's brilliantly, ridiculously funny and well-crafted."

The Hand That Rocks the Crawford is the first show that Oasis is putting on since the pandemic lockdowns caused the club to shutter its doors for an extended period. Martin said he was honored to be the star of the club's return engagement.

"I can't wait to do it," he said. "I'm off book, if I had to I could do it tonight. And of course there's a musical number thrown in. It's in my contract! We're having a blast."

Martin promises that the infamous, legendary interrogation scene from Basic Instinct will be included in the show. As the scene played out in the original film, Sharon Stone seductively shocked members of the San Francisco Police detective squad as they questioned her about a murder. In the scene Stone crossed her legs, showing perhaps a bit more than the officers expected to see.

"I get to play an unhinged psycho bitch," Martin said. "Which is like an actor's field day." 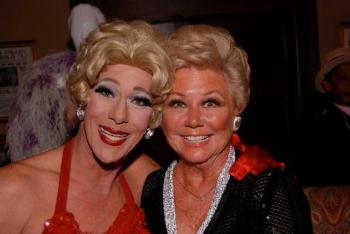 One similar role that Martin has wanted to play is the Jessica Walter character in the 1971 Clint Eastwood film Play Misty For Me. In that stalker chiller, a forerunner to films like Fatal Attraction, Walter gave what Martin calls a "tour de force performance."

"Actually, Joan Crawford wrote her a fan letter after seeing that," said Martin. "That was shot in Carmel, and it was the first time Eastwood had been down there. He fell in love with it and relocated there. I remember when Fatal Attraction came out in 1987, and I thought this was a complete rip-off of Play Misty For Me, in a way. So I always wanted to do a stage production of that, but maybe make it Play Mitzi For Me, as in Mitzi Gaynor."

Martin feels that doing shows like this can turn audiences on to the work of whichever star he's impersonating. He recalls doing a show in which he played jazz great Peggy Lee. His neighbors saw the show. When they got home, they Googled Lee.

"It made me happy," he said. "It was a teachable moment, I turned someone on to Peggy Lee. It's the same way with old movies and Joan Crawford and recommending people to watch it. She's an iconic representation just as Bette Davis is of Hollywood, an endurable Hollywood star with a career starting in silent films and unfortunately her last one was Trog, which was kind of a sad ending. Such an absurd movie that it begged to be sent up."

He remembers watching Trog and thinking that Crawford was playing it as though it was The Miracle Worker, the film for which Anne Bancroft, another screen legend, won an Oscar.

"That's what I love about her," Martin said of Crawford. "Regardless of some of the material that she played or had to play, she always gave a great performance to the best of her ability. And so when you talk about movie stars, Joan Crawford is definitely in the pantheon."

To anyone on the fence about attending The Hand that Rocks the Crawford, someone who might not be familiar with Joan Crawford's work, Martin has a simple message regarding the show.

"It's funny as hell," he said. "And you don't need to now the source material to appreciate it. So if I can turn someone on, if that inspires someone to go see the source material, great. It's timeless material, I mean if everything is based on everything, then I say steal from the greats, that's what they did. If something is well done and funny, then it doesn't matter if you're 16 or 61, if it's well done, it should be appreciated."

The Hand That Rocks the Crawford, Thu-Sat 7pm, July 22-Aug 7. Get tickets at www.sfoasis.com 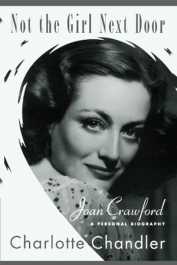