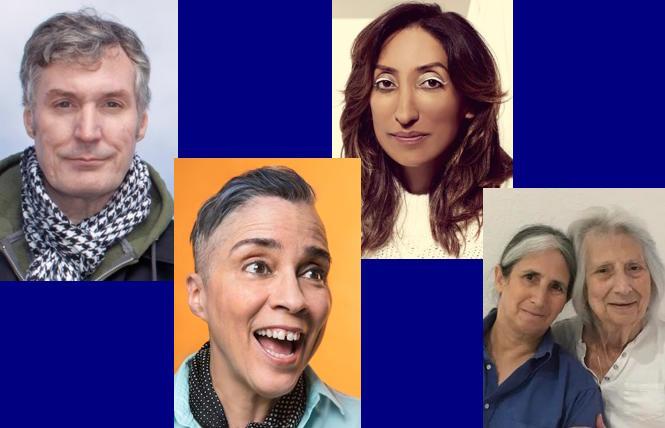 Lisa Geduldig's monthly online comedy show Lockdown Comedy celebrates its one-year anniversary on July 15 with a rollicking night of comics from around the world. Geduldig, who produced monthly comedy shows at El Rio during the pre-pandemic days, will host and perform from Florida with her mom, special guest performer Arline Geduldig. The elder Geduldig made her comedy debut with Lockdown Comedy last year and was the surprise hit of the season.

"I thought it was going to be a one-off that she'd just perform on the first show, July 2020," Lisa Geduldig said in an email interview with the Bay Area Reporter. "But she did really well, enjoyed it, got laughs, and the audience loved her so I thought why not? And I've been living with her and producing a comedy show from her guest room."

Her mom writes her own material, and Geduldig helps her mom fine-tune the material.

"Everything goes into a comedy notebook that I started for her," said Geduldig. "Who would've thought that one day I'd be prepping my mom for her comedy sets?"

Geduldig reports that her audience comes largely from the Bay Area but that there are people who log on from around the country and around the world. Every month viewers are invited to stay on and "schmooze" after the show, and there is a core group of around twenty people who do so.

In addition to the Geduldigs, performers for the anniversary show include Bay Area lesbian comic legend Marga Gomez, Jim Short from Australia, and Shazia Mirza from London. Each replied to a few emailed questions.

Mirza is a well-known comic who has performed worldwide. Her envelope-pushing routines have led to her being called "one of the bravest, funniest comedians in the world," a label she disagrees with.

"I would never call myself brave," said Mirza. "I haven't saved anyone's life or been swimming with sharks. People may think I'm brave to talk about whatever I talk about on stage, but I'm just telling the truth about my life."

The truth about her life can be hilariously shocking, as she doesn't hesitate to address issues such as race or her Muslim heritage. She has even dropped a few zingers about suicide bombers.

"I never intend to deliberately offend people," she said. "However, it is my right to offend and it is anyone else's right to be offended."

Whatever she talks about, a Mirza performance never fails to make the audience laugh.
"It will be funny," Mirza said of her Lockdown show. "There will be a bit about how I survived the lockdown and what I watched on TV and what the future looks like and what my mum still expects of me."

Short describes his comedy as a "ramble." He enjoys having "a chat" with an audience.

"People have told me that it's like I'm talking directly to them," he said. "As though it's just a few of us sitting about telling tales. Getting people to laugh motivates me, but I'm inspired to take an audience on a journey."

For his part, Short isn't quite ready to return to touring. He's still holed up in Australia and keeps himself busy by reading a few good books. After having been on tour for decades, he said that it feels nice to just sit at home and read, though he is looking forward to doing the Lockdown Comedy show.

"I will be sharing some adventures from New Zealand, and possibly a few other locations," he said. "The show is going to be so exciting, and I can't wait to see everyone. I'm thrilled to be part of this amazing event."

Though the online shows will continue, Geduldig has announced that on Thursday September 2 she will return to El Rio, the place where her comedy reputation took off, to produce a live show on the venue's patio. She is about to start booking the comedians and promises that the show will be livestreamed so that her online audience can tune in as well.

Geduldig noted that she's a bit surprised to be celebrating Lockdown Comedy's one-year anniversary. When she first launched the online shows in July 2020, she had no idea how long they would last nor any idea how long the pandemic would last. She's been producing shows and doing PR for 30 years, and so her reputation has paid off.

"I didn't think that Kung Pao Kosher Comedy would be around for thirty years but Lockdown Comedy won't be, I will be almost 90," she said. "Lockdown Comedy will continue for as long as we have an audience. Venues are opening and people are starting to go back to live performance but for a multitude of reasons there are still people watching shows on Zoom. It's great for agoraphobes. Agoraphobes unite!"