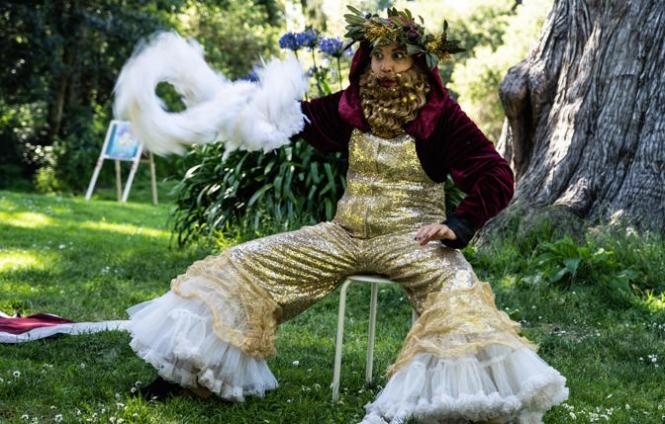 Tina D'Elia as Hibiscus in Golden Gate Park in 'Out of Site: Haight-Ashbury'  (Source:Robbie Sweeny )

"Raise your hand if this is your first time taking LSD," jokes Seth Eisen to a dozen curious theatergoers gathered at the corner of Ashbury and Page Streets on a bright June Saturday.

Eisen, clad in a sunshiny orange leisure suit this morning, is the impresario behind Eye Zen Presents (Can I get an "Oy vey?"), which since 2007 has been mounting multi-disciplinary theatrical adventures rooted in queer culture. His latest drop (I see your lousy puns and raise you several, sir!) is Out of Site: Haight-Ashbury, an acid-free preservation and celebration of hippie-era queerdom.

The production, the third in an ongoing Out of Site series, is a blend of walking tour, puppet show and playlets that introduce attendees to the life stories and lifestyles of two epically eccentric San Francisco figures: Peggy Caserta, a clothing designer, den mother and sometime lover of the Grateful Dead and Janis Joplin whose Haight Street boutique, Mnasidika, served as an ad hoc HQ for the epoch; and Hibiscus (né George Edgerly Harris III), the glitter-bearded, floral-gowned founder of queer performance collective The Cockettes.

Both of these self-invented characters are not so much played as embodied by Tina D'Elia, who initially appears as Caserta outside the first-floor storefront of the Doolan-Larson Building where her shop was located for three years beginning in 1965.

In Caserta's rambling anecdotes about her casual creativity and its ultimate exploitation by more business-minded forces, D'Elia strikes a skillful balance between toughness and tenderness, thick skin and bruised fruit. Women's lib and free love were no easygoing couple, and as much as Caserta comes off as emblematic of her time, D'Elia and scriptwriter Michelle Carter also make it apparent that she was precariously ahead of it.

From Haight Street, Eisen and his motley band of collaborators lead their audience on a stroll through the neighborhood to a sun-dappled little grove in Golden Gate Park where D'Elia re-emerges as Hibiscus with his freak flag flapping full force. 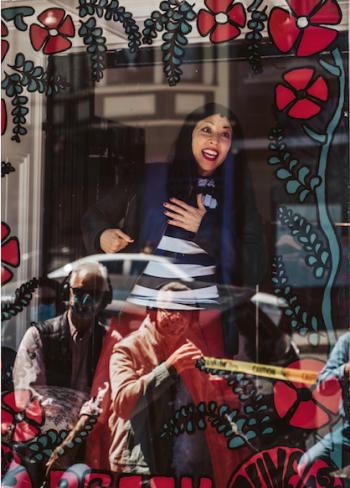 Tina D'Elia as Peggy Caserta in the Mnasidika storefront window in Out of Site: Haight-Ashbury  (Source:Robbie Sweeny)

A mutant descendent of East Coast WASPS, Hibiscus was a proto-Radical Faerie par excellence and D'Elia —whirling, twirling and nailing his weirdly singular unidentifiable accent— gives us all his glory, pulling together an ad hoc storytelling session with help from audience members who, at this particular performance, uninhibitedly giggled aloud. When was the last time you were swept up enough to do that?

For the most part, D'Elia's dynamo energy and Eisen's ingeniously simple stagecraft (unscrolling storyboards, costume changes behind a dropcloth, a rod-manipulated puppet) carry this final portion of the show.

It's a delightfully meta experience: We're at a loosey-goosey be-in learning about loosey-goosey be-ins past; we're being elbowed into an improvised spectacle just like Hibiscus' Cockette colleagues once were. It feels good and silly and smart.

Go with the feeling. Because if you try to go with the storytelling, things also get meta, but in a muddled, befuddled, less satisfying way. As Caserta re-emerges, Carter's script and Eisen's direction begin a non-chronological wobble between the two characters' stories and the show's narrative thread gets a bit lost.

There's insufficient detail to make sense of what's going on unless you've done previous research on these characters. There are fleeting glimmers of echo and recursion, but not enough to get a grip on. It's like the less rewarding aspects of an overall happy acid trip.

But a passage of bummer amidst a barrage of bliss shouldn't hold you back. It may even be intentional. There's a synesthetic quality to the entire production that I found wonderfully transporting; trippy even, as Eisen's opening joke foreshone. During the walk between Haight Street and the park, audience members wear headphones and listen to a broadcast transmitted from a wagon pulled along by crew members.

There is period-appropriate music and snatches of interviews that Eisen conducted with people who lived and loved in the buildings that you're passing. You're walking the past. You're waking the past. Time and sound and sunlight collapse into a unified whole. You're living history. Can I get a "Bravo"?

Out of Site: Haight-Ashbury
Saturdays and Sundays through July, 11am and 3pm. Meets at Ashbury and Page Streets. Tickets: $15-$125, sliding scale. www.eyezen.org

Magical History Tour: Out of Site's virtual history of South of Market