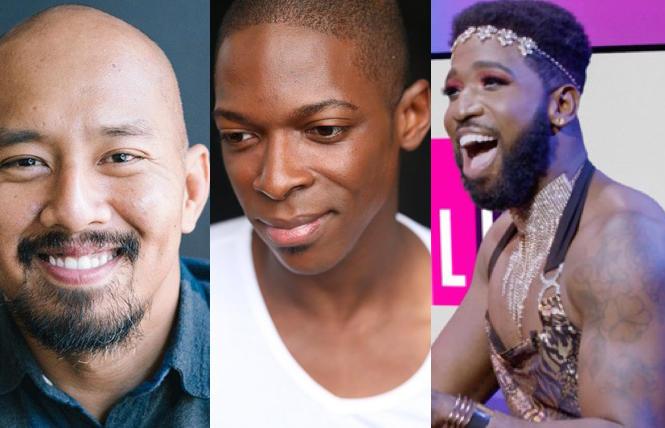 With apologies to Gabe Kaplan, who did a much-loved turn as a high school teacher back in the 1970s, there are few people from whom I'd rather get my American history and humanities lessons than Jomar Tagatac. And to get them in-person rather than through distanced learning makes it all the sweeter.

Tagatac, one of the Bay Area's most versatile actors, has played toughs and ciphers and romantic leads. With light-footed grace, he touches on all of those and more in the San Francisco Playhouse production of Hold These Truths, playwright Jeanne Sakata's one-actor/multi-character dramatization of the life and trials of Gordon Hirabayashi, directed by Jeffrey Loo.

Hirabayashi's parents and siblings were among the tens of thousands of U.S. residents of Japanese ancestry —many of whom were American-born U.S. citizens— evicted from their homes and herded to geographically remote internment camps during WWII under President Franklin Roosevelt's infamous Executive Order 9066.

At age 23, having already registered as a conscientious objector to the U.S. military draft on grounds of religious pacifism, Hirabayashi leaned even further into his conscience. He openly refused the order of internment, arguing that it was unconstitutional, based only on racial prejudice rather than any real military need.

After turning himself in to the FBI, he was sent to jail where he began a convoluted trip through the American justice system that led to the Supreme Court's upholding the charges against him in 1943, but ultimately, in 1987, a dramatic overturning of his conviction.

During our ugly current confrontation with anti-Asian and anti-Black prejudice, Hirabayashi's activist refusal to back down provides a powerful example. For theater buffs whose familiarity with the Japanese internment is based primarily on Allegiance, the George Takei-produced musical, Hold These Truths offers an important counterpoint to that show's prevailing air of victimization.

That said, for all its earnestness, Sakata's writing often feels like a civics primer. Granted, this particular civics lesson is sorely needed. And audiences of this production are in luck, because Tagatac gamely excavates emotions from Hirabayashi's story that are not fully evident in a script that is generally plain and sometimes platitudinous. 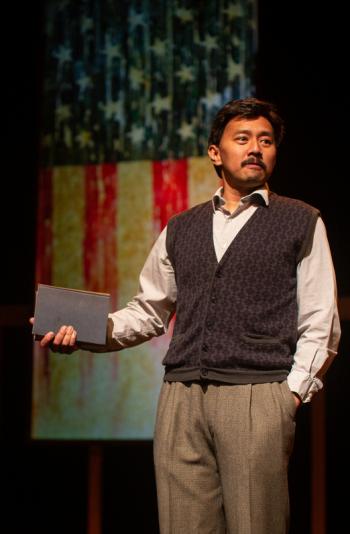 Jomar Tagatac in 'Hold These Truths'

He's the kind of performer who goes above and beyond a playwright's words to draw music out of characters' souls. Who reaches right off the stage with a vibrant energy we've been missing.

Watch the mischief in Tagatac's eyes when his Hirabayashi sharpens legal strategy, the way his body softens in tender pride when he speaks as Hirabayashi's mother, the bushy-tailed energy he brings to a gang of college kids.

And watch his sheer joy in doing the work he loves —sharing meaningful stories with a live audience— when Tagatac yanks off Hirabayashi's goofy mid-century hairdo at the end of the evening and directly acknowledges the crowd. His smile is well earned yet deeply grateful. It says, "Welcome back" right back to us.

One itchy question I've got to ask. Versions of Hold These Truths have been mounted since 2008. Along the way, Sakara has made revisions to her script, as playwrights are wont to do. But I was stopped cold and set squirming when Hirabayashi, after losing an important legal battle, moaned "I can't breathe." Was that line added after May 25, 2020? If so, it should be reconsidered.

Juneteenth...with teeth
This Saturday is the annual commemoration of the end of slavery in the United States, a time to celebrate, certainly, but also to meditate over the current state of black lives in America. Three productions available on COVID-hangover video this weekend showcase powerful perspectives from African-American theater makers in the Bay Area and Los Angeles.

Manifesto is a puckish take on the post-pandemic cusp by Rotimi Agbabiaka, a queer Bay Area performer of Tagatackian ubiquity who has brought distinctive shamanic sparkle to productions for companies from The San Francisco Mime Troupe to the California Shakespeare Company, where he played a memorable shade-throwing harem overseer in House of Joy.

Agbabiaka wrote and performs this series of quick-cut sketches and musical interludes that make up Manifesto, which was originally created as a solo stage show but has been significantly reimagined to take advantage of video production, with jump cuts and flashy edits that feel perfectly suited to the material.

"As we return to public gatherings and live theatre," Rotimi has written, "I wanted to revisit...the would-be stars, the gatekeepers, and creative ancestors like James Baldwin and Nina Simone. What would they have to say about theatre's recent past and what guidance could they give for its future?"

The show is packed with big laughs and big issues. It's celebratory and cerebral, as befits the moment.

Pillow Talk shrewdly borrows the title of one of the whitest, least sincere movies of all time, in which Doris Day succumbs to Rock Hudson's glib machismo, for what looks to be a sharp, sensitive take on intimacy between Black men. Theatre Rhinoceros' new commission is written by Kheven Lagrone, who hails from Oakland and sets his play there in the 1990s.

It centers on the relationship between Baby Boy, a young street hustler, and Chuck (Ramond Thomas), an upwardly mobile older man who may become Oakland's first police chief. There's a precarious dance between tension and affection as the two men strain to harmonize their commonalities with their differences. Devin A. Cunningham, an Oakland native, beams in from Savannah, Georgia to play Baby Boy, and his video introduction to the character makes you look forward to spending more time with him. Tankia Baptiste directs.

Livestreaming Friday and Saturday, 8pm; Sunday 3pm. On demand Sunday, 5pm-Midnight. Pay what you can. www.therhino.org 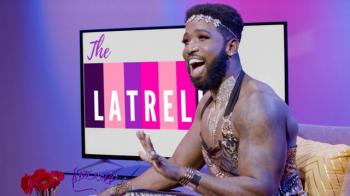 The Latrell Show, from Los Angeles' IAMA theater, is a campstravaganza on the surface with a dark undertow beneath. The brainchild of writer/performer Brandon Kyle Goodman, it begins as flaming, fast-talking TV-chat show parody —title character Latrell is the Billy Porteresque host— and evolves into a more complex examination of gay Black identity in contemporary America as

Goodman takes on a second character, Jeremiah, a troubled office worker whose natural lack of showboating fabulosity renders him near-invisible. The piece's structure doesn't entirely work dramatically, but it shines as a showcase for Goodman's talents: Effortlessly charismatic but simmering with subversiveness. Latrell is a super-smart hybrid of In Living Color laughs, Justin Sayre satire, and Sorry To Bother You surrealism. Catch Brandon Kyle Goodman now. You'll say you knew him when.