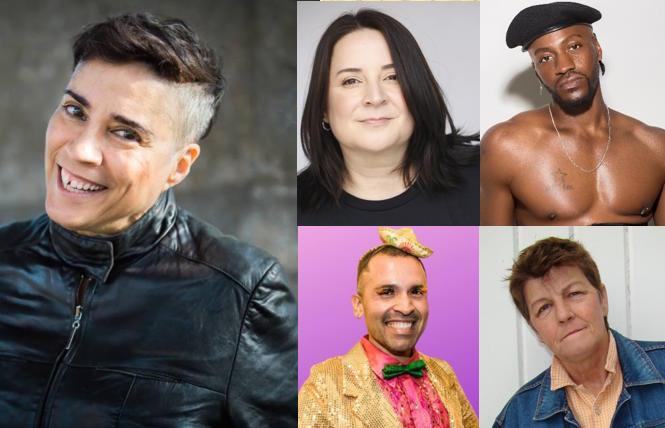 On June 17 lesbian comedy legend and host Marga Gomez will offer Who's Your Mami Comedy: Pride Edition. The show is part of a series of stand up shows that Gomez has been doing in conjunction with Brava Theater since 2019. The show will be zoomin' on Zoom at 7pm and is, according to Gomez, the final time this series will be presented online, although she does plan to continue it in some fashion whenever Brava Theater reopens.

Who's Your Mami promises to offer a line-up of hilarious laugh makers. Scheduled to perform are co-headliners Sampson McCormick and Sandra Valls, who will be heating up your computer screens with some sizzling gay comedy. Also on hand will be another lesbian comic legend, Karen Ripley, and Jesus U. BettaWork, who was voted Best Comic in the Bay Area Reporter's Bestie Awards for 2020.

The pandemic was hard for Gomez, as it was for everybody, but she made the best of it. She had a show opening on March 13, which turned out to be the first day of shelter in place.
"And then it dawned on me that we were in a pandemic," she recalls.

And so, like many performers, Gomez took to live-streaming. Before all the brick and mortar stores closed, she went to the Guitar Center on Van Ness Avenue and bought herself some podcasting equipment. She began watching YouTube tutorials and got a webcam. The show that was due to open was live-streamed to the Brava Theater audience and got picked up by theater festivals in New York and San Diego.

"A lot of great performers didn't want to do the live-streaming route," she said. "They've just been waiting for over a year. I haven't. I've been developing stuff the whole time."

And though she wants to return to performing live in clubs, Gomez plans to continue live-streaming.

"I mean I spent a lot of money on my equipment," she said. "Look, YouTube got big before the pandemic, so there are people who like to watch videos. Just because something is DYI, doesn't mean it's gonna suck. It can be really good, and if you like an artist you get to see them more intimately."

It can be difficult to find humor amid the pandemic, but, according to Gomez, you get whatever little nugget you can. Sometimes, she points out, comedians can be curmudgeons who complain about the people who won't wear masks, who can be a source of comedy.

"We feed on stupidity," she said. "And there's been a lot of that."

Gomez explained the origins of Who's Your Mami (pronounced Mommy). In the New York barrio where she grew up, Mami used to be a catcall that straight men would hurl at women as they walked down the street. But now Latina women use the term with each other as a term of endearment.

"I love the way women have taken that word and turned it into something loving and respectful," Gomez said.

Gomez added that to her, Pride is about connecting the dots: homophobia, classism, and racism.

"It's about the struggle of people who are underrepresented or underserved to get equity," she said. "Pride is a celebration, but it's also a commitment to stay honest, to think of ourselves as part of a community, and to think of our community as part of other communities that also are maligned or exploited. To me Pride is change."

She promises that the four comedians she's presenting will complement each other. First to be presented will be Jesus U. BettaWork, who Gomez describes as a unique and funny performer.
"He's very campy and clever," she said. "He's like a queer Bugs Bunny."

Karen Ripley is the queen of deadpan and one-liners, according to Gomez.

"She has been doing stand-up comedy since 1977, out as a lesbian," Gomez said. "I call her a dyke-on, you know, like an icon. She's a dyke-on. And she's really raunchy, really dirty."

Sandra Valls will be streaming from Los Angeles. "She's a Mexican American comedian," said Gomez. "She talks about the Chicana experience. She's a fantastic performer. We all like sex, so she'll probably get into some sexy stuff too. It's going to be a very sexy, fun show."

Gomez discovered Sampson McCormick on YouTube. "His videos go viral all the time," she said. "They're about gay sex, about the hypocrisy of the church towards gay people when the clergy is gay. I don't know what he's going to talk about but it's always wonderful. He's a great storyteller, and a very funny comedian. And he's easy on the eyes."

Tickets are $10 and Zoom doors will open at 6:30. And to those who are not sure if they want to check this show out, Gomez offers some simple advice.

"Go to the website and look at the credits on these people," she said. "HBO, BET, Viceland, Logo, all these television networks can't be wrong. They've won awards. I would love for people who have never heard of us come. Google them, and check out their videos."