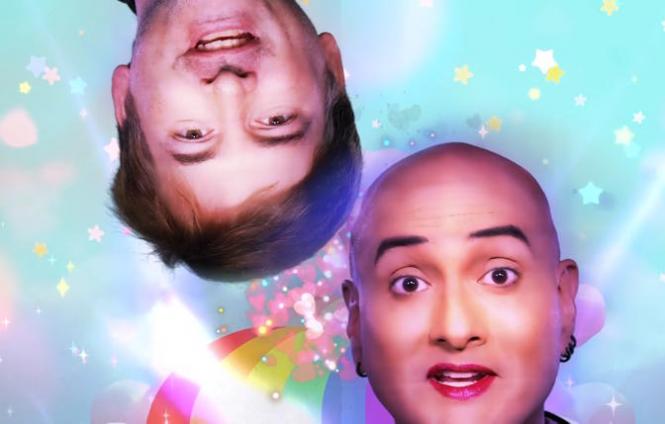 Peter Budinger (upside down) and DC Scarpelli in 'Don't Touch That Dial!'

It's time to change channels.

After more than a year of kneecapped theater watched from couches and desktops, Bay Area stages are coming back to life. There will be limited, socially distanced seating for a while longer, but there will also —finally— be the buzz and breath of audiences and performers sharing a room, the feedback loop of laughter and gasps, that damn guy snoring in the row behind you. Ah, the humanity!

It's strangely fitting that one of the last major virtual productions to emerge in the San FrancisCovid-era is a cheeky salute to at-home entertainment. Don't Touch That Dial!, which will stream every weekend in June, is a lighthearted, slickly produced musical revue celebrating that earwormiest of genres, the television theme song.

Created and hosted by local stage stalwarts DC Scarpelli and Peter Budinger, the 70-minute program features more than two dozen performers setting aside the likes of Sondheim for less-esteemed musical oeuvres created under the auspices of Norman Lear (All in the Family, The Jeffersons, Maude), Garry Marshall (Happy Days, Laverne and Shirley) and other primetime producers. Sung in full and in medleys, there are a whopping 22 theme songs in Don't Touch That Dial, stretching from The Patty Duke Show to The Fresh Prince of Bel Air.

"We'd been playing with the idea of doing a show like this for a long time," said Budinger in a recent interview with the Bay Area Reporter, "When the pandemic hit and productions we were scheduled to perform in were cancelled or postponed, we decided to go for it."

Budinger and Scarpelli, a couple who first met as members of an undergrad improv comedy group at Yale University, are hardcore theater lovers today. But they both admit to spending much of their late '70s/early '80s suburban childhoods transfixed by the tube.

"We were such vidiots," recalls Scarpelli with a laugh. "I was so pathologically attached to my favorite shows; I remember running into the kitchen yelling the big news when I first saw that Phylicia Ayers-Allen had changed her name to Phylicia Rashad in the credits of The Cosby Show."

In casting their show, Budinger and Scarpelli, both in their late 40s, quickly realized that their personal Golden Age of television was ancient history to many of the cast members still in their 20s and 30s.

"There's not much that makes you feel your age," admits Scarpelli, "Like someone who has never heard The Brady Bunch theme."

Of course, such unawareness of the source material can lead to interesting interpretations, like what Budinger describes as "a kind of punk version of the theme from The Greatest American Hero."

In a painstaking multi-step production process, the show's songs were all re-orchestrated and recorded as guide tracks by music director Daniel Thomas, then distributed to performers who used them to create vocal tracks which were then mixed with fully produced instrumentals. Sequences were filmed on stage at the Gateway Theater, in Budinger and Scarpelli's ad hoc garage-based green screen studio and in some individual performers home spaces. 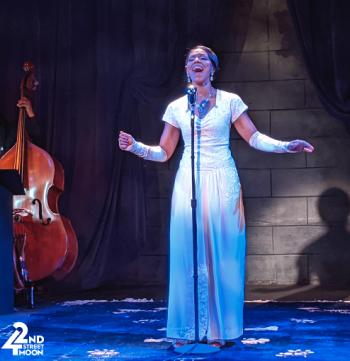 While their TV tribute is the capstone of 16 months offstage, Budinger and Scarpelli —like so many artists and audience members— are looking forward to finally getting back to live performance later this year. They've both been cast in the 42nd Street Moon production of Sondheim's Merrily We Roll Along. As Sonny Curtis once sang to footage of downtown Minneapolis: "We're gonna make it after all."

She's a Lady
Before Don't Touch That Dial premieres next month, there's still time to catch 42nd Street Moon's accomplished video production of Lady Day at Emerson's Bar and Grill featuring an impressive musical performance by Doris Bumpus as Billie Holiday. If this year's Oscar-nominated The United States vs. Billie Holiday was among the films you streamed over the course of the pandemic, Lady Day will provide a compelling alternate perspective on Holiday's story.

In Cabaret
The final streaming production this column will cover in 2021 is one of the most valuable. The New Conservatory Theatre Company's latest offering, The TransNational Cabaret, which runs through June 10, was conceived by NCTC artistic director Ed Decker to provide a spotlight for transgender performing artists.

The cast of 'The TransNational Cabaret'

It's a highly polished collection of six short presentations including dance, animated film, spoken word, comedy and music, all of which focus on what co-curator Chris Steele calls "trans joy."

Steele, a drag performer who serves as emcee, says "Honestly, this is a piece by and for a trans audience. Other people are welcome to share and enjoy, but it's not about explaining ourselves, it's about celebrating ourselves."

The Bay Area, says Steele, is one of the few places in the world that is a real stronghold for trans people. It's also home base to half of the show's performers. But the very fact that such a program might not be mounted in most other cities is part of what makes online streaming a good match for TransNational.

"People are tuning in from all over the world," says Steele, "Working in the digital medium really opens up the accessibility of art to audiences who couldn't otherwise see it."