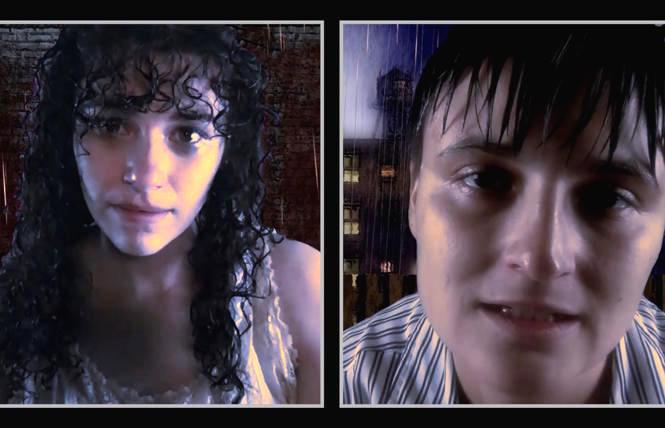 The 1906 play God of Vengeance, written by Sholem Asch, caused a sensation when it was first performed across Europe. When the play was translated into English and performed on Broadway in 1923, the cast was arrested on obscenity charges due to its lesbian kiss, possibly the first in theater history.

From May 2 through May 31, a new production of God of Vengeance will be available for streaming in a translation by Caraid O'Brien. Originally planned as a live theater piece, director Bruce Bierman brought the play to Zoom after the pandemic hit, with each actor performing their lines from their own homes. The result is a remarkable production in which the actors strongly connect with each other, an impressive feat considering that they were never in the same room.

God of Vengeance touches upon many themes and leaves the viewer with much to think about. As the play begins, Yankl and Soreh (Roni Alperin, Jill Eickmann), an observant Jewish couple, are paying for a Torah scroll to be inscribed so they can show their community how pious they are. They hope to arrange a marriage for their daughter Rivkeleh (Elena Faverio). But Yankl and Soreh aren't quite as pious as they seem. They've made their fortune by running a brothel in the basement of their building.

Rivkeleh is forbidden to go down there, but what her parents don't know is that Rivkeleh has fallen in love with Mankeh (Zissel Piazza), one of the sex workers. And herein lies one of the most impressive aspects of this production. The kiss the two young women share is tender and intimate, which is all the more impressive since the two actors have never met in person.

The acting is superb, with Faverio and Piazza offering riveting performances as two young women in love. Alperin is also quite good as Rivkeleh's abusive father, and there's an appearance from Bay Area theater legend Naomi Newman, who appears in a male supporting role.

Love story
Bierman, who has directed a number of shows around the Bay, tells the Bay Area Reporter that the lesbian relationship in the story is why he wanted to do this play.

"I still think it's the most beautiful thing in the play," he said. "Unbelievable that this tender passionate loving scene was written in 1906."

He noted that in Asch's original script that the lesbian relationship comes in at the end of act one, and that it was intended to shock the audience.

"In my version I wanted to change that," he said. "I wanted to develop the relationship. Everything is building up to that last kiss. In the beginning I show them as great friends, they're playful, laughing, and then as the play progresses Mankeh keeps getting closer and closer until that last kiss that she elicits from Rivkeleh. So that's how I changed it in this version." 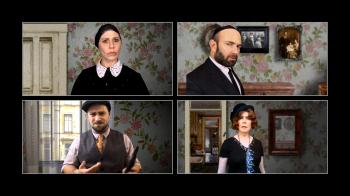 The director, who is queer, also points out that in Asch's original script Mankeh is a bit manipulative, trying to get Rivkeleh to come to the new brothel that she's going to and to use her as a pawn.

"And I wanted to erase that," he said. "I want it to be one beautiful thing that shines in the whole story with this relationship, the purity of it. And I also changed something else. Asch's original play revolves all around Yankl; every great actor wanted to play Yankl. I always felt that Rivkeleh and her mother Soreh were pushed to the side a little bit, so in this version I was able to really put my camera on Rivkeleh, and tell the story through her eyes."

Rivkeleh, according to the director, is the character who changes the most. She takes the bravest action, defying her family's expectations and standing up to her tyrannical father.

"And that's the story I wanted to tell," he said, noting that the actors who play the two young women are both queer.

The play was first shown for three days a few months ago. Bierman says that he's gotten no reaction from the Orthodox Jewish community.

"They usually would never go near anything like this," he said. "They wouldn't touch it."

Bierman spoke of the challenges of putting a play together via Zoom, and of getting the actors to interact with each other when they're not in the same room. While most of his cast was from the Bay Area, they also had actors from far flung places such as Los Angeles, Las Vegas and New York.

"We really had to work on intimacy, " he said. "The actors wanted to look at each other on the screen but I had to get them to look at the green dot which was more center stage, to look as if they were talking to the other person, so that was difficult to do. And I knew we would have to go into deeper naturalism because their faces were right up to the screen, so I just kept on pushing for real behavior, and listening, and connecting with each other, even on Zoom."

The result is a riveting drama. God of Vengeance, as translated by O'Brien and directed by Bierman, is as close to an evening in the theater as we'll get during the pandemic. Both Bierman and his cast should be commended for doing such a wonderful job under such difficult circumstances.

God of Vengeance streams from May 2-May 31 and is in English with a bisl (little) Yiddish. The video stream has a closed-captioning option. It is recommended that viewers who don't speak Yiddish turn the subtitles on in order to understand the Yiddish phrases which are peppered throughout the play.

Lives in the Yiddish Theater, re-enacted