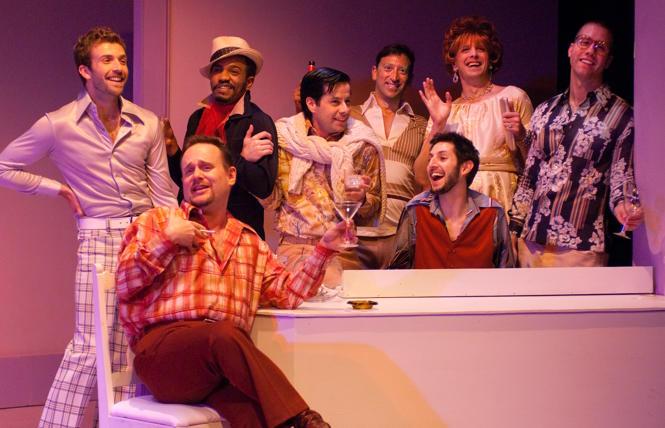 If you search the word "theater" in the archives of the Bay Area Reporter, you'll discover plenty of features and reviews.

But you'll also find the word used thousands of times in other sections of the paper, most notably in pre-internet personal ads; "Handsome GWM, 50, masc, sensuous, retired, theater, music, travel, HIVneg responsible, smooth a plus..." —and in obituaries— "Mike enjoyed fine foods, musical theater, good times with friends and his dog Crackers."

For many in the queer community, theater is not just a pastime; whether we participate as audience members or art makers, it is a part of our identity.

As repeatedly observed in our feature coverage and our interviews with some of the great queer stage luminaries of the past half-century —Harvey Fierstein, Lisa Kron, Edward Albee, Lily Tomlin, Terrence McNally, Tarell Alvin McCraney— the theater is a realm we've used both to escape the world and to discover ourselves. 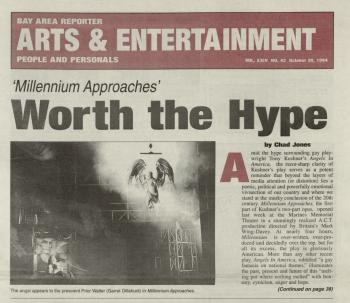 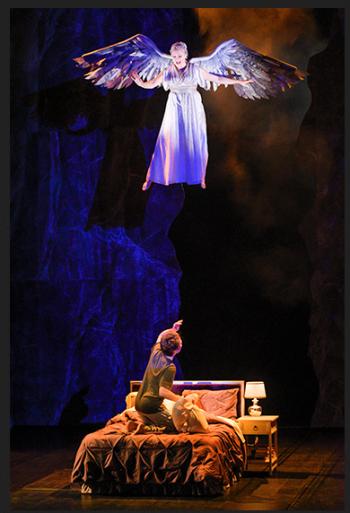 In 2018, Taccone, then artistic director at the Berkeley Rep, once again took on Angels in a spectacular revival, for which Kushner —who never considers his work complete— made some small script adjustments. Stephen Spinella, who played Prior Walter in the original Broadway production, and for whom Kushner wrote the role, took on the part of arch-villain Roy Cohn while, Randy Harrison (the original Queer As Folk) took on the younger role. Harrison told the B.A.R. that he had actually gone to see Spinella play Prior Walter when he was a just-out-of-the-closet 16-year-old. And the great work continues. 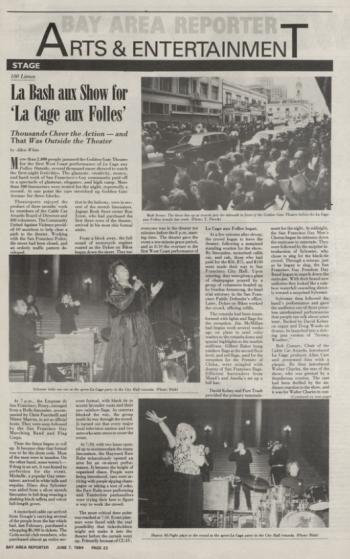 The gilded Cage
Another touchstone show that's been revisited over decades to very different reactions from B.A.R. critics is the musical La Cage Aux Folles. Cheered for its gay characters and I am what I anthem, but jeered for its gender-role rigidity and (originally) kiss-less chastity, its first national tour began at the Golden Gate Theater in May, 1983 with a circus-like fete ring-mastered by gay Hollywood producer Alan Carr (Grease, Can't Stop The Music with the Village People and Bruce Jenner). Ostensibly a fundraiser for gay charities, it was covered on our front page under the headline "Carr Snubs Gays: Stars Don't Show. Smiles hide tensions between producer and SF organizers."

Eleven years later, when La Cage returned to play the Orpheum, our critic John Karr wrote, "There aren't gay people in this show, only straight people's shallow stereotypes of gays...to me, La Cage is little more than a minstrel show."

In 2011, a third national tour in the wake of a Broadway revival opted to skip the Bay Area altogether. But in the nearly 30 years since its local debut, gay representation has significantly broadened in mainstream theater, taking some social burden off of La Cage, which has gone on to have many warmly received productions locally, including 2013, 2016 and 2017 by Petaluma's Cinnabar Theatre, Bay Area Musicals and the San Francisco Playhouse. 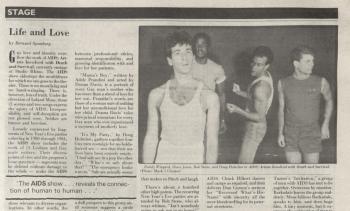 The show sprung to life in the streets of North Beach in 1974 and eventually took up residence at Club Fugazi, hosting not only locals, but carousing conventioneers who spread the word of its slightly naughty Dad-jokery and monumental millinery turning the ever-evolving revue into a staple of San Francisco tourism. The B.A.R. covered BBB from its early days until its unexpected demise, after 45 years, on New Year's Eve 2019.

"Beach Blanket Babylon was wonderful for the city, and the city was wonderful for us," producer Jo Schumann Silver told the B.A.R. before the closing, "But there will be some other wonderful thing...There is always great stuff ahead."

Theatre Rhinoceros was founded just six years after the Bay Area Reporter. Having survived endless ups, downs and brinks of collapse; the San Francisco company now proudly claims the mantle of being "the longest running queer theater in the world."

Over the years, Rhino has marked other historic milestones. 1984 saw the debut of its original production The AIDS Show: Artists Involved with Death and Survival, a collaboratively created review originally slated for a nine-night engagement that struck a powerful chord in audiences and ran for several months.

"There is no moralizing or hand-wringing," wrote our reviewer Bernard Spunberg. "Irresponsibility and self-deception are not glossed over. Neither are humor and heroism."

Two years later, it became the subject of a PBS documentary directed by Rob Epstein and Peter Adair, one of the first feature films to deal with AIDS.

In 1998, Kenneth R. Dixon was named Artistic Director of Theatre Rhinoceros, becoming the first African American to ever helm a queer theater company. In 1990, not long before he left the company for academia, Dixon and Rhinoceros were embroiled in the National Endowment for the Arts/Jesse Helms controversy over the refusal of grants to work deemed "obscene" by the government. 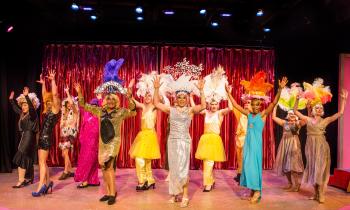 In a B.A.R. opinion piece, Dixon decreed: "The work we do...is of serious literary, artistic and political value. If it weren't, we wouldn't be here. It is also exclusively homoerotic in nature."

Current Rhino artistic director John Fisher has taken on local theater's most indefatigable approach to the pandemic writing and performing a new solo production online every week in a series he calls 'Essential Services.'

"It's my way of not feeling totally cut off from the world," he told the B.A.R. last year. "To be honest, while I hate to say it in a way, it's made me feel very focused and happy during what in so many other ways is a very unhappy time." One of the performances is titled Insane Director.

The more the merrier
Since 1981, the New Conservatory Theatre Center has joined the Rhino in presenting full seasons of work by and for the queer community. Under the steadfast artistic direction of company founder Ed Decker, NCTC has cast a wide net, producing challenging performance-art-adjacent pieces by provocateurs including Keith Hennessy, Karen Finley, and Tim Miller alongside adventurous West Coast premieres and surefire queer crowd-pleasers, including Avenue Q, Take Me Out and the works of Terrence McNally, Del Shores and Charles Busch. The B.A.R. published more than 100 reviews and interviews of NCTC playwrights, actors and productions.

And given the artistic and economic presence of the queer community in the Bay Area, it's no surprise that the B.A.R. has been able to highlight LGBTQ+ -themes and aesthetics on a wide range of local stages including those at Shotgun Players, Custom Made, Ray of Light, The Marsh, Magic Theatre, the SF Mime Troupe and many more. 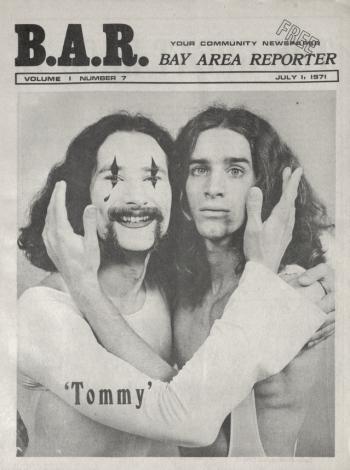 1971
Tommy can you queer me? Ah, the Hippie era! In one of our very first issues, Terry Alan Smith crushed on and gushed over this outdoor production at Lone Mountain College: "'Yes! That's it!' you scream inside yourself...'I can't take such beauty, such excitement! I want to run out of the theatre and back into the world of mediocrity..."
article link

1976
A cheeky gay humor and a hunky male lead (Marc Singer in revealing tights) were crowd-pleasers in A.C.T.'s production of The Taming of the Shrew, one of many examples of Bay Area productions fearlessly taking on the complexity of Shakespeare's still timely insights on sexuality and gender.
article link

1982
Stage and cabaret star Sharon McKnight wrote to B.A.R. from Berlin about how San Francisco served as her launch pad to Broadway and beyond.
article link

1988
San Francisco native BD (né Brad) Wong, won a Tony award for the title role in M. Butterfly on Broadway. After understudying for Wong in New York Alec Mapa took on the title role in a national tour; when it played the Curran in 1991, our John Karr called it "a grand shazam of a show."

1991
Marga Gomez's bicoastal climb from stand-up comedian to playwright/actor reached an early peak in The Family Gomez at the Marsh, which our critic Deb Peifer called both "astonishingly funny" and "blisteringly painful".
article link

1998
"At long last, San Francisco is treated to honest and biographical depictions of gay black men on the stage," hailed B.A.R. critic Jerry Metzker of Theatre Rhinoceros' original Up Jumped Springtime, adapted from the watershed Brother to Brother literary anthology by Colman Domingo, who also performed in the show. A fixture on Bay Area stages in the late 1990s and early 2000s, Domingo co-stars in this year's Oscar nominee for Best Picture, Ma Rainey's Black Bottom.
article link

2002
In conjunction with the U.S. debut of Baz Luhrmann's La Boheme at the Curran, New York-based producer Jeffrey Sellers tiptoed around contemporary English usage as well as the notion of his show having a special appeal to gay theatergoers: "When I hear 'queer,' I just think it has to do with whether you suck dick."
article link 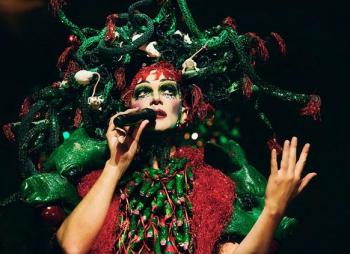 2003
Something pre-Broadway this way came for the official warm-up run before its New York opening. A celebration of women's empowerment with music by Stephen Schwartz. Our Richard Dodds' review—"Simply, its just not good enough—had no discernable effect on the juggernaut called Wicked, which has conquered the world and tornadoed back into town on a regular basis ever since.
Wicked review
Here's our interview with Wicked author Gregory McGuire, who wrote the novel the musical is based on.

2011
The Magic Theatre produced the world premiere of Stockton native Taylor Mac's five-act The Lily's Revenge and has since commissioned additional Mac works, including Love and Pandemic, slated to premiere this coming fall. The Magic also co-produced Mac's groundbreaking 24 Decade History of American Popular Music, which played the Curran in 2017, along with his https://www.ebar.com/arts_&_culture/theater//232986|had a long chat with the Macarthur Grant winner in 2014. 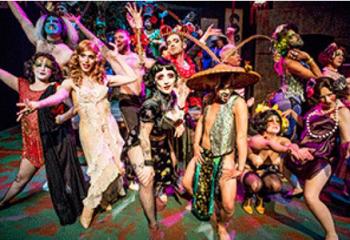 2017
An "only in San Francisco" and ultra-queer theatrical tradition came to an end with the closing of the Thrillpeddlers' Hypnodrome theater. Descended from the Cockettes, this 26-year-old troupe specialized in blood-and-puns Grand Guignol horror theater—including an annual Shocktoberfest and musicals like Club Inferno, Pearls Over Shanghai, Hot Greeks and many more. First formed in the late '90s, Thrillpeddlers operated the city's strangest venue—a ramshackle theater under the freeway ramp at 10th and Division—from 2004.
Cockettes Are Golden 50th anniversary show in 2020

Not curtains: theater companies adapt to retain audiences
Sign up!