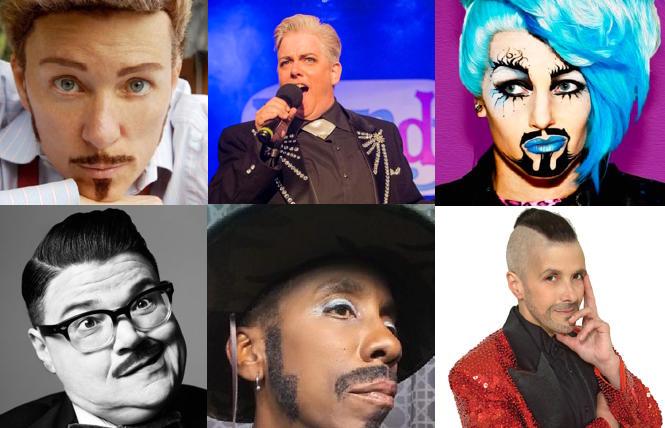 Clockwise from upper left: MC Mo B Dick, Leigh Crow, Sexy Galexy, Fudgie Frottage, Luster Dela Virgion and Murray Hill are among the many drag kings in the Legends show.

Names like Mo B. Dick and Sexy Galexy will grace your computer screens when Drag King Legends takes to Zoom on February 21 at 5pm. Kings with 25 years or more experience will be honored in a show that promises to be informative, exciting, and entertaining.

Talent includes local legends Leigh Crow and Fudgie Frottage, as well as kings from as far away as Canada, Australia, Germany, and Sweden. A total of a dozen kings will perform. There will also be tributes paid to kings no longer with us: Diane Torr of New York City, who passed in 2017, and Dred, also from New York, who passed in 2019.

The pandemic is what forces the kings to do a Zoom show instead of an in-person show as they usually do. There is a bit of disappointment in not being able to do an in-person show, according to Frottage, who is co-producing Drag King Legends. 2020 was the 25th anniversary of the annual SF Drag King Contest, which Frottage produces. But Frottage and his comrades are not letting the pandemic keep them down.

"Now that we know this isn't going to go away anytime soon, too bad we had a Nazi Orange Gasbag in charge of our country, unlike New Zealand where everyone is COVID-free and mask-free, we are all investing in green screen and learning editing skills," Frottage tells the Bay Area Reporter. "It's just another hurdle in life, a minor one for us gays. But hey, the show must go on."

Frottage promises a "cavalcade of kings" during the Zoom show.

"We are all working very hard to make this show a spectacular, smoothly run production," he said. "Mo will be live introducing the acts, whose videos are pre-taped to avoid technical glitches. Then immediately following the show we will have an after-party hosted by Murray Hill to recreate backstage VIP for our fans."

Frottage and Mo B. Dick are old friends, having known each other for over 25 years. Both have long, well established histories in the drag king world. Frottage, known as "the man with the biggest balls in show business," has been performing since the 1980s and was formerly known as Lu Read. He was a singer and guitarist fronting a huge Motown cover band which incorporated notorious drag trendsetters Doris Fish and Sluts A-Go-Go.

As Frottage, he was voted Best Drag King 2020 in the B.A.R. Besties poll and has hosted and appeared on the Pride mainstage. He has also performed at Folsom Street Fair, and at the Warfield, Regency, Castro and Kabuki Theaters. Mo B. Dick has been performing in New York City since 1995, where he produced and hosted Club Casanova, the world's first weekly drag king party. The Club has toured the US and Canada three times, and Dick was also featured in the John Waters film Pecker.

"Mo and I are kindred spirits," said Frottage. "We both hail from the East Coast, so we share that in-your-face-humor." 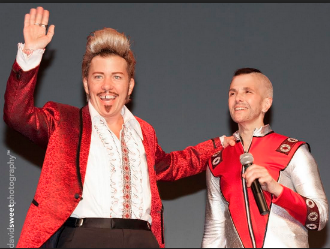 "I was inspired to become a drag king from seeing other drag kings such as Buster Hymen, who portrayed super-sexy Jim Morrison and Julie Wheeler, who was the iconic Elvis in an all-female rendition of Viva Las Vegas in the summertime of 1995 in Provincetown," said Dick. "I never knew drag kings existed, so I was blown away by them. Shortly after I was in San Francisco and read an article on the drag king scene there. The transformations were astounding so I thought what the hell, let me try it."

"Mo B. Dick is a tough talker from Brooklyn with an outspoken wit and charm that will make your heart swoon," Dick said. "With his signature pompadour, gold tooth and sharp suits, Mo became the voice of a new generation within a burgeoning drag king movement."

Sexy Galexy refers to himself as "the original glamourboi'.

"A glitz, glam, masc, fem, a get down boogie man, all wrapped up in a disco loving, muscle flexing, more-of-a-woman-when I-am-a-man man," he said.

Galexy explains how his character came to be created.

"It was many years of experimenting with drag," he said. "And I had never heard of the term drag king. I always thought of myself as a drag queen. When I finally heard the term, it all began to make sense to me. I can still be glamorous and camp but with a mustache."

Galexy promises that the audience will see several versions of himself, in his disco loving element.

"I love all drag," he said. "There isn't one sort of drag I separate from the other. I, and many others, I think, enjoy the illusion of drag and the endless interpretation of drag. It's eternally creative. It's an immersive experience, and it's a form of escapism for both the performer and the audience."

Frottage assures us that a great time will be had by all.

"This show is full of talent," he said. "As an OG king I feel like a godfather or grandfather to the kids; a community elder. We were the pioneers who paved the way for drag kings, not that there weren't kings, male impersonators, or gender illusionists before us. Like Muffy St. Jacques said to Peggy Gravel in Desperate Living when they were at Flipper's bar, 'Boy, if you don't like this bar show, there is really something wrong with you!'"

Tickets to Drag King Legends are $25, though there is a pay what you can option for those affected by the pandemic.
www.dragkinghistory.com/legends