Post-play parley: 'The Catastrophist' and 'Hi, Are You Single?' discuss diseases and disability 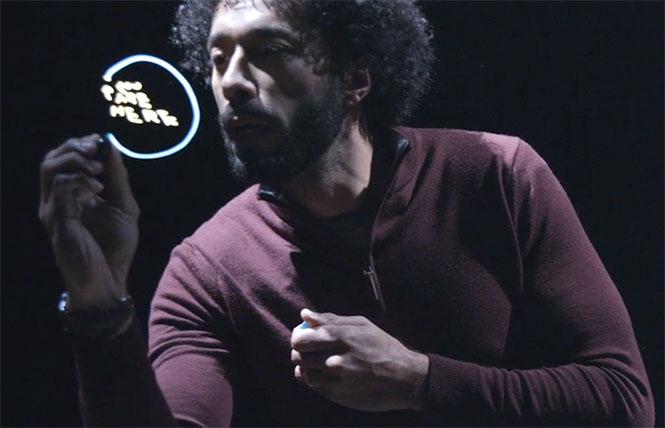 William DeMeritt in 'The Catastrophist'

One of the best parts of an 'In Real Life' evening at the theater comes after the curtain call. As we head out of the auditorium, we overhear fragments of our fellow audience members' reactions—what impressed them, what fell short, what they thought the show was about.

Tuning in to snippets of conversation, we feel a bit of sparkle when opinions match our own, a bit of disdain when perceptions seem off-kilter. Occasionally we catch hold of a notion that opens up a whole new dimension of the show that somehow never occurred to us.

Then we take these overheard samples and mix them into lengthier conversations with our theater-going companions at bars and restaurants and the backseats of ride-share cars. In the best evenings of theater, some of the most engaging dialogue takes place offstage. Reading a critic's review before attending a show is all well and good, but participating in a lively appreciation and analysis of your own is far more joyful—and valuable.

I realized just how much I missed those immediate post-performance exchanges after watching two new streaming productions loaded with topical conversation fodder and discussion-worthy structural choices. These are shows worth making the effort to watch at the same time as your friends so you can hop onto Zoom for a good gab afterwards. Both are available on-demand through the end of February.

The Catastrophist, a world premiere produced by Mill Valley's own Marin Theater Company in collaboration with Washington D.C.'s Roundhouse Theater, is a monologue by San Francisco playwright Lauren Gunderson in which an actor—William DeMeritt, riveting from start to finish—plays her real-life husband, Nathaniel Wolfe.

So: an autobiographical solo show in which the main character is not the author; a writer putting words in her trusting spouse's mouth; a script in which the playwright is openly rebuffed and beloved: a meta-fiesta.

But hold onto your overarching-sombreros, there's more: Nathan Wolfe is an immunologist—one of the world's leading experts on viral pandemics. The most compelling parts of the show are when he dynamically lectures the audience —sketching in day-glo on a transparent marker board— on the science that lies behind the current real world drama in which we all play a role. The facts are at once awe-inspiring and horrifying. Allowing us to see through the eyes of a passionate scientist, DeMerrit focuses on the former, rather than the sadly familiar latter.

If Wolfe, who models pandemics in the hopes of controlling them, is the titular catastrophist, Gunderson, in this particular work, might be deemed an excessivist. On top of topicality and meta-narrative, she layers on lengthy passages recounting Wolfe's family relationships; particularly his reverence and mourning for the many men in his patrilineal line who died of heart failure near the age of 40— his own age in this piece. The scientist's unsentimental fascination with disease runs up against his experience of its tragic impact.

Gunderson's ambition is thrilling. She seems inspired by Tom Stoppard in her heady blend of edification, entertainment and poetry. And while The Catastrophist never quite pulls itself together, its criss-crossed themes and dangling loose ends have a hypnotic effect nonetheless.

This in no small part due to the elegant proscenium-disintegrating cinematography of Peter Ruocco and enveloping sound and lighting design by Chris Houston and Wen-Ling Lau, respectively. Director Jason Minadakis has leveraged technology, stagecraft and editing to make a single actor in an essentially empty room feel utterly enveloping.

No doubt there's work to be done with this show. And some of it belongs to the playwright. But there's plenty for audiences to take on as well. Have at it, theater lovers. 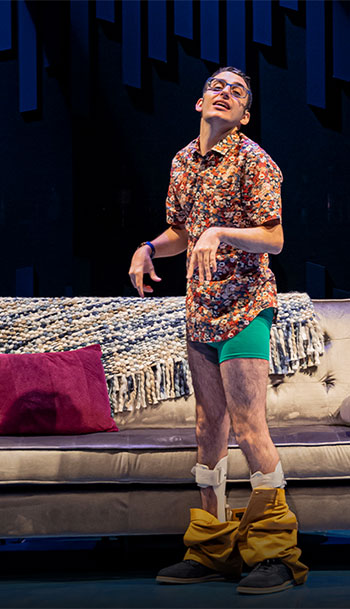 Hi, Are You Single?, produced by IAMA Theater from Los Angeles and the DC-area's Woolly Mammoth Theater, is a more conventionally-built autobiographical monologue. It's performed by its author, Ryan J. Haddad, who spends much of an hour regaling the audience with his funny, familiar pursuit of sex and dates. Because he's 28, many of these misadventures involve mobile apps.

Haddad is what my gay college clique would have described as goofy-cute: Tall, lean and lanky with a huge crooked smile, jug-handle ears and an appealingly beaky nose on which he perches thick plastic spectacles that confidently pose the question "Am I stylish or dweeby?" as well as the slightly-too-snappy follow-up, "Who cares what you think?"

He also has cerebral palsy, which results in his moving about the stage —and through life— with weakened, slightly akimbo limbs and a walker. Haddad makes zero effort to hide this, even in Grindr profile pictures in which his walker is intentionally positioned. And yet, there seems to be a sizable population of willfully blind (or compulsively penis-focused) gay men who arrange hook-ups with him only to bail out upon meeting.

He also dishes about men who, in casual bar-side conversation, have no compunction asking if his junk is functional. Another delightful fellow tells Haddad that he finds him attractive and is definitely into having sex, but that anything more serious would be impossible because CP "wouldn't fit into my lifestyle."

Haddad, best known for his role on Netflix' The Politician, easily commands the stage and —because he tells his stories with some annoyance but little self-pity— makes audience members comfortable laughing at his jokes even as they're investigating their own attitudes. Haddad reminds us that the disabled are often rendered invisible or nonsexual even in the alleged bastion of inclusion that is the queer community.

The most provocative section of the show finds Haddad looking back on a prospective tryst with an HIV+ man, during which he sees himself reacting to serostatus in many of the same ways others have reacted to his CP. It's a vulnerable, judge-not-lest-ye-be-judged moment that suddenly makes Hi, Are You Single? both sharper and more universal. Please discuss. Streaming on demand. $20.99. www.woollymammoth.net

Queer & Disabled on the Big Screen

Guest Opinion: From one pandemic to another