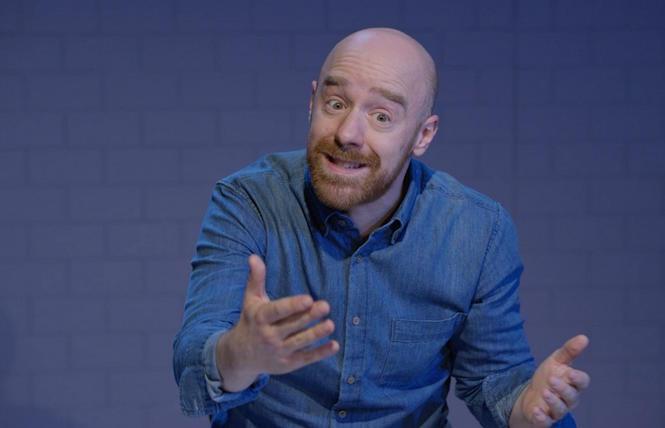 Los Angeles-based comic actor and writer Tom DeTrinis' new one-man show, Making Friends, streaming through January 18, is the latest link in a director-actor daisy chain that began with Michael Urie's terrific 2013 Off-Broadway turn in Buyer and Cellar as Alex More, the fictional custodian of Barbra Streisand's very-much-real Malibu bunker, which houses her collection of costumes, art and objets de décor. (Urie—best known for his role in Ugly Betty and his stalwart queer activism—brought that show to the Curran in 2014).

Urie went on to direct Bright Colors and Bold Patterns, another very gay hit Off-Broadway monologue, written and performed by Drew Droege. Droege hilariously embodies a jabber-jawed gay man in his forties who is unable to cope with the post-Obergfell reality of queer weddings and his own deep sense of estrangement from assimilation. In the assistant director's chair was Tom DeTrinis. DeTrinis also directed another Droege solo comedy, Happy Birthday Doug, this past February (Both are available for streaming).

Now, Droege takes the directorial reins of DeTrinis' solo shenanigans in the IAMA Theatre Production of Making Friends. A good friend he proves to be, elegantly choreographing DeTrinis's movement around the stage of the Pico Theater, where the show was recorded without an audience due to the pandemic. Unfortunately, that lack of an audience seriously undermines the impact of DeTrinis' writing and performance.

Making Friends is an autobiographical piece. DeTrinis —a self-described rage-aholic— plays an exaggerated version of himself. The show's vignetted structure lacks a driving narrative arc. There are loosely connected bits on wacky family. Lousy jobs. Status-minded parties. Growing up gay. In short, the best written parts of the piece feel quite like stand-up comedy.

There's nothing inherently wrong with that. But the success of stand-up comedy —no matter how well written— depends on audience engagement. Energy is exchanged. Laughs beget laughs. Its easy to imagine this show feeling 100% funnier if crowd members could be heard expressing their agreements and disagreements with DeTrinis as he ticks through his laundry list of gripes and grievances.

DeTrinis has a terrifically elastic voice that lets him slip gracefully from character to character without props or costumes. His movement and gestures are impressively precise and controlled. But there's a hollow feeling to the proceedings as a whole.

I'd genuinely be interested in seeing this show again in a club or theater, post-corona. But for the time being, Making Friends spotlights one of the ways the pandemic has unmade the arts.

Making Friends by Tom DeTrinis, directed by Drew Droege. From $15. Streaming at www.iamatheatre.com