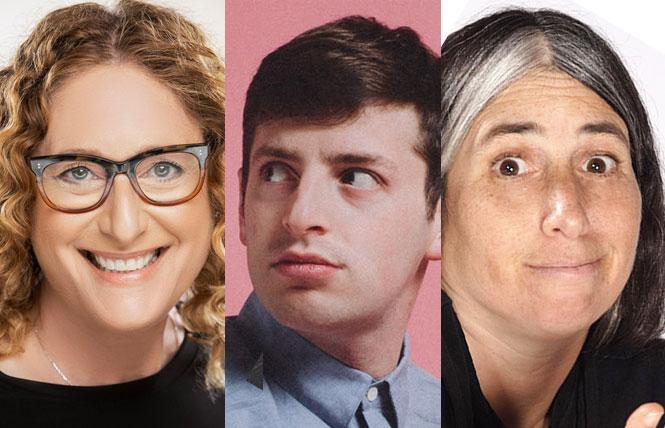 In Geduldig's shows, people gather in a Chinese restaurant not only to eat, but to laugh at some rollicking good comedy. Over the years some of the biggest names in comedy, such as Henny Youngman, Shelley Berman, David Brenner and Elayne Boosler have performed at Kung Pao.

Gathering in person is obviously not an option this year, but the show must go on, and indeed goes on as a virtual event. Kung Pao Kosher Comedy will take place in a virtual Chinese restaurant on Thursday and Friday, December 24 and 25 at 5pm, and Saturday December 26 at 2pm, and will be seen on Zoom and YouTube Live. Attendees are encouraged to order Chinese food from their local take-out restaurant, or to cook Chinese dishes, such as the signature dish Kung Pao Chicken. Kung Pao Kosher Comedy will provide the recipe.

The show promises to be almost the same as sitting in an actual Chinese restaurant. Those who attend on Zoom will be able to gather with friends and family in breakout rooms one hour before the show. Geduldig promises that the rooms will mirror the tables traditionally reserved by audiences at the in-person shows, and will feature table names like Bubbelah, Kvetch, Meshuggannah, Barbra Streisand and Joan Rivers.

There are three performers this year; Alex Edelman, lesbian Jewish funny woman Judy Gold, and Geduldig herself. In addition to Kung Pao, Geduldig produces a monthly comedy show not set in a Chinese restaurant. These shows have also moved online.

"One thing I'm doing with Kung Pao is the third day I decided to have the show a few hours early so that people in London, Europe, and Israel can watch," she said.

Geduldig added that doing online shows has not only expanded her audience, it has expanded her performers. "I can ask a performer in L.A. or New York or London or Hong Kong if they want to do the show," she said. "I've asked this one comic who I've been trying to book for years for Kung Pao but he was always going home to London for holidays. I asked him if he wanted to do the show in August or September and he said, 'Yup, I'm available.'"

At Kung Pao, Geduldig noted, the humor is mainly Jewish.

"It's always Jewish comedians, and I always ask people to be heavy on the Jewish humor, but it doesn't have to be entirely," she said. "Kung Pao is a combination of Jewish and non-Jewish. I think the first four years it was 99% Jewish, but since 1997 when Henny Youngman performed, it put Kung Pao on the map on a larger scale, and more people started coming who weren't Jewish."

Geduldig spoke of Edelman. "He's fairly young, a mid-twenties millennial comedian," she said. "I think he's brilliant. I just love his mind, and I have a lesbian crush on him. I really love watching him in action, because he has this one bit where he says, 'I've never tried bacon. I'm that kind of Jew. I've tried cocaine, but I've never tried bacon.'"

Comedy Gold
This year's star guest, Judy Gold, has performed at Kung Pao several times in the past.

"Judy Gold is fabulous," Geduldig said. "She's lesbian, and she was the first performer I saw when I started watching online shows. I was originally booked to perform at the Rossmoor Pride event, and then the pandemic hit, and they said, 'Can you do the show on Zoom, can you still perform?' And I said, 'Let me watch some shows first.' So I started watching what other people were doing and I started thinking that everyone is sitting at a computer screen; I've got to stand. And then I saw Judy standing with a mic and a mic stand and a curtain behind her, and I said, 'Yes, this looks more like you're doing a show as opposed to just sitting in your pajamas in front of your screen."

Geduldig added that Gold is "a pro. She has a new book out, so she's been doing the talk show circuit," said Geduldig. "She's been on The Today Show, she's been interviewed by Wendy Williams; she's very famous. She's been a sub-host on The View, and with Anderson Cooper on his show, she's been on Comedy Central, she's won Emmys, she's done one-woman shows, she's had acting roles in different TV shows. She has a podcast called Kill Me Now. In July she interviewed Alex Edelman, who's the other comedian on the show, and she decides to ring a bell every time he says something Jewish, so she's like ding! ding! ding! ding! She's everywhere."

Gold tells the Bay Area Reporter that she's managed to keep busy during the pandemic.

"I've done a lot of outdoor shows," she said. "In Provincetown all summer I got to work twice a week. I've done a lot of online shows, and I got the hang of it now. It's definitely an adjustment, but you figure out how to work a crowd on a computer. I usually have it on gallery because I like to see the audience. People are sitting in their homes eating, washing the dishes. It's hilarious!"

Gold pointed out that people need to laugh now.

"They want to be entertained; they want to forget all this shit," she said. "That's what theater and comedy and art does. And it's the perfect palate for stand-up, because everyone's in the same boat. You can't ask for a better palate to start a show. I mean can you believe this crap that we're dealing with? I love that all these comics have figured out a way to do their art and to make people laugh during this shit time. Because we get to say all the things that you're thinking, and we're all thinking the same things, hopefully."

"The greatest audiences," she said. "Great combination of the Jews, and the LGBTQ community, and just people who love comedy. You don't have to leave your home and you get entertained. You never know what's going to come out of my mouth, but I'm working on stuff about what's going on in this great country of ours."

She also loves the idea of Kung Pao. "Because that's what we did," she said. "We'd go to the movies and go eat at a Chinese restaurant. Lisa was the first to come up with this idea and now everyone has their own version of it. It's a fun tradition. We kind of started it in the Catskills. We are a group of people who loves to laugh. Thank God for the Jews. For all of their fundraisers, they always get a comedian, which is how a lot of us keep afloat. I mean, what do Jews love to do? Eat Chinese food, complain, and watch comedy."

Traditionally, Geduldig would walk around the room and "shmooze" with people during the dinner show. This year she will pop in virtually to the breakout rooms and say hi.