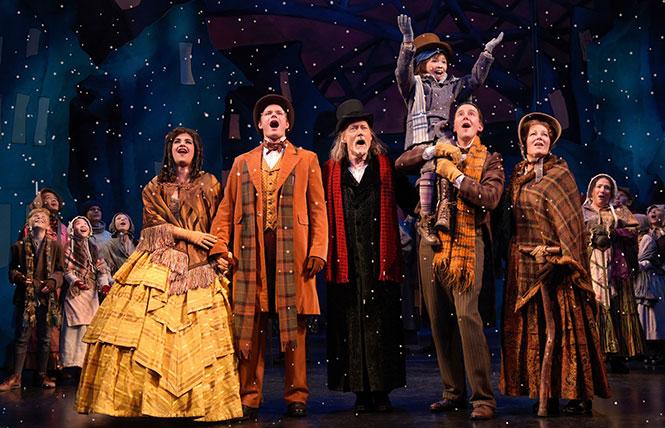 You'll have to imagine the marvelous staging from A.C.T.'s 'A Christmas Carol' (shown here in 2019).

It may not have been the worst of times. But it's been a dickens of a time, for sure.

When it became clear that the COVID-19 pandemic was an anti-gift that would keep on giving through this year's holiday season and beyond, the creative team behind American Conservatory Theater's annual production of A Christmas Carol knew it was in for some heavy lifting.

For 43 years, this family-friendly December tradition has charmed Bay Area audiences, provided conservatory students an opportunity to perform with professional actors and, importantly, served as a reliable source of revenue for the non-profit company. It's a show that has delivered much of its charm through large ensemble scenes and impressive staging, with lavish costumes, lighting effects and puppetry.

Given the necessity of keeping cast and crew members isolated from each other, it was decided to mount this season's edition as a streaming audio production. But director Peter J. Kuo knew that a movement-filled, visually intensive show like Carey Perloff and Paul Walsh's adaptation of Charles Dickens' original novella would require much more than simply recording the existing script.

"About 50 percent of the dialogue has remained and I've rewritten the rest," explained Kuo in a phone interview with the Bay Area Reporter. "Its an adaptation of an adaptation."

Some of Kuo's script changes are simply a matter of adapting to the audio medium: "I cut a scene we've had the past where characters play Blind Man's Bluff at a party. I tried to add lines that would help listeners picture it—'Oh! They're over there!', 'Don't touch your blindfold!'—but it was really created as a visual scene. The wandering around on stage was what was funny about it."

Other revisions though, represent Kuo's desire to add particular relevance to this year's model, for both performers and audience. "We have four characters narrating the story from the present day: They're four students who find themselves stuck at school and unable to be with family over the holidays. They find a copy of the Dickens novel and decide to read to each other as a way to pass the time and enjoy each others' company."

While the audio version stands as its own piece—and, thanks to the medium, allows A.C.T. to share its work with audiences far beyond the Bay Area—ticket buyers who have seen the stage show multiple times will enjoy listening closely to note the clever ways that Kuo has woven together long-loved elements (James Carpenter, a stalwart Scrooge and audience favorite, is back) with new and revised material.

"I realized early on that this was going to be a huge puzzle," says sound designer Jake Rodriguez, who first worked on an A.C.T. Christmas Carol production 19 years ago. "But as I'm tinkering with the final recording, I feel like it works really well. I don't think the average audience member will have any consciousness of how complex the sound actually is. Hopefully it will allow let them form a clear picture in their mind without any effort."

Part of that clarity, explains Rodriguez, should come from his work to build a three-dimensional sonic experience that creates a sense of space and volume in each listener's brain.

"There are certain things you almost take for granted, sound-wise, when you're watching a show on stage. People enter and exit from the right side or the left side, they don't just go through a door, they go through it and then they walk to another part of the room. Now, I have to give your brain an audio cue for all of those things."

Among the greatest engineering challenges came in recording the show's choral musical elements. Rodriguez explains that shelter-in-place regulations made the process far more complicated than a traditional recording with the cast together in one sound studio. "We have songs with a dozen or more voices in harmony. Each performer needed to be recorded individually and then I layered it all together."

So, gather your friends and family, whether at home or listening in together from afar, for what promise to be intimate, imagination-fueled evenings (or matinees—it's streaming, so it's your call) of high spirits, spooky chills, and by all means, some hearty chuckles. As Dickens wrote in his original novel,"It is a fair, even-handed, noble adjustment of things, that while there is infection in disease and sorrow, there is nothing in the world so irresistibly contagious as laughter and good-humor."
Available to stream Dec. 4—Dec. 31. $40-$60 per household. www.act-sf.org 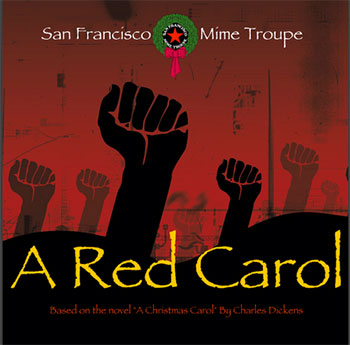 Carol, too
There's another newfangled Carol in town this year: An ironically audio-only production from, ahem, the San Francisco Mime Troupe (Strange times call for strange measures, right? And the SFMT hasn't really been willing to hold its tongue for ages now).

In Sullivan's spin, Ebeneezer Scrooge is a corporate banker, the Cratchit clan lives in a homeless encampment and the ghost of Christmas present spooks on behalf of the 99%. Humbuggers may approach this sort of doctrinaire reimagining of a classic with skepticism, but Carol has been endlessly lampooned by figures much less connected with Dickens' original message than the Mime Troupe (Bill Murray's Scrooged, anyone? The Flintstones' Carol? Mr. Magoo?). In many ways SFMT—which has been railing against the evils of capitalism for 60 years—is better suited to adapt this story than any of these passing fancy pop culture characters.

Also, of note this cash-strapped holiday season: While donations are always encouraged, SFMT is offering A Red Carol free of charge to anyone who wants an earful. Marx bless 'em, every one.
Available from Dec. 11 through Jan. 17. www.sfmt.org

Big Mac
One last stocking stuffer to put on your list: next Saturday, Dec. 12, for one show only, the Curran will present a livestream video extravaganza by MacArthur Fellow performance artist Taylor Mac, who will be reprising and revising elements of the raunchy, poignant tinsel-strewn Holiday Sauce! show he performed live at the Curran in 2018. All of Curran's ticket proceeds will be donated to Open House, a non-profit service organization for LGBTQ+ seniors and older adults in San Francisco. We'll have a chat with Mac about the new show and his just-released Holiday Sauce album in this section next week.
Holiday Sauce...Pandemic! live-streams Saturday, December 12, 7pm. $10. www.sfcurran.com